Happy Thanksgiving from OTRCAT.com!  Thanksgiving is a wonderful holiday tradition filled with family, friends, and food.

During the war years, everyone tried to save money and resources during Thanksgiving.  Jack Benny scrimps to the point where he considers buying a canary instead of a Thanksgiving turkey.  George Burns asks Gracie Allen to stop spending money on food and goods and start buying war bonds.  Command Performance gives a rousing holiday presentation for the troops with Dinah Shore.  After the War, you can bet Jack Benny keeps his penny pinching ways during the holidays.

Please enjoy these Thanksgiving-themed old time radio shows free to download from the Thanksgiving Collection.  Read about each episode and gobble them up with your friends and family:

"Gracie Buys a Live Turkey" from November 17, 1942
The show contains classic Gracie antics as George goes over the family budget and a great speech from George about buying less so the troops have more.  To save money, Gracie buys the family a turkey for Thanksgiving, the only problem is that it's still alive and gobbling. 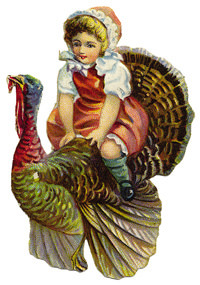 "Turkey Shoot" from September 7, 1958
A boy is taking pot shots at a local farmer's turkey farm, but his dad (Grover) is reluctant to admit the boy (Eddie) is guilty.  It turns out that the turkey farmer is gobbling it up at with Grover's wife when he's away.

"Thanksgiving Program" from November 19, 1950
Mrs. Davis cannot spend Thanksgiving with Miss Brooks, that's a good thing because last year she made a "whole roast pepper."  Miss Brooks hopes that the handsome Mr. Boynton asks her out for Thanksgiving, but Stretch Snodgrass writes an article in the school newspaper that changes everything.

"Jack Dreams He Is A Turkey" from November 21, 1943
Jack Benny is hosting Thanksgiving Dinner this year and needs a turkey for 15, but Turkeys are 55 cents a pound and Jack has a penny pinching dilemma.  Jack's indecision makes him ponder about the life of the turkeys and their families in the butcher shop. Jack dreams he is a turkey and tries to catch a train out of town. 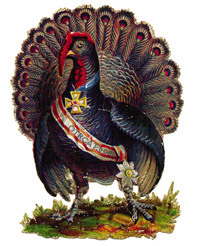 Dinah Shore and Harry VonZell drop by Wally Brown's place for Thanksgiving dinner.  When Harry pipes up "Look Butter!  He's got Butter!" Wally hushes him and says "It goes on the bread, you don't spread it all over town!"

The Challenge of the Yukon - (Adventure)

"The Terrified Turkey Caper" from November 24, 1950
Sam plans to break wishbones with his best gal but first he has to solve crime.   A meek man looks to Sam Spade for help as someone is trying to kill him on Thanksgiving Day.  His name?  Tom Turkey.

All these episodes (and more!) are in the
Thanksgiving Collection on MP3 CD

Spoiler : I just wanted to send you a short note to tell you how much I appreciate your great products and excellent service. I drive a lot at times, and the radio shows you sell, make an otherwise boring drive exciting and entertaining. Thank you again, and Happy Thanksgiving!! I'll be ordering again, really soon!!

Reply
Spoiler : Here's wishing everyone a happy and fun holiday. I am thankful for many things in my life. And one is OTRC and your amazing website! So thanks Jon for all you do in helping to keep all those thousands of wonderful OLD RADIO SHOWS -- still one of the greatest forms of entertainment -- ALIVE! I listen to and enjoy them every single day.

Reply
Spoiler : From the series The Jack Benny radio program. Jack Benny gets a turkey for thanks giving and asks Rochester to kill it. After Rochester kills the turkey Jack takes a nap and dreams that he is on trial for murdering a turkey and everyone in the court room is a turkey. There is a running gag where the judge who is a turkey has to sit on the nest.

Reply
Spoiler : Thank you for putting this collection of Thanksgiving shows together for us to enjoy. I listen to them every year leading up to the holiday. Great picks!

Reply
Spoiler : I will be ordering more various shows from you in the months ahead. I mean one can never have too many old time radio shows on my shelf right? Long live "the Golden Age of Radio!" It truly was the best of times.