My parents owned a dairy farm in the Eastern Townships of Quebec. For my seven sisters and one brother, pitching in to help was just another part of growing up. But back in the 1950’s, many people felt that if you were born blind, you couldn’t possibly be capable of lending a hand. That meant that I spent a lot of time in the house with my mother. 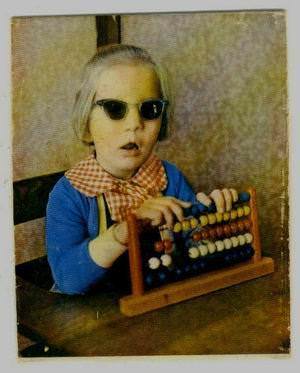 One day, when I was probably four or five, I pulled a high chair up beside the fridge so that I could reach the radio, and serendipodously discovered soaps on our CBC station … One Man’s Family, Whispering Streets, Laura Limited, Aunt Lucy, The Craigs, Guiding Light, Ma Perkins, Pepper Young’s Family, The Right to Happiness … and I was fascinated! How was it possible for me to hear what was going on in Ma Perkins’s home when I couldn’t hear what was happening in the homes of my older sisters? Why could I hear two sides of a phone conversation on radio when I couldn’t hear what Aunt Bessie or Aunt Kathleen were saying when they called my mother?And wow! On The Happy Gang, Bert Pearl announced the names of songs just like Mr. Layton did at school! From that day on, I pestered my mother unmercifully.

On weekends, there were children’s shows like Just Mary, Maggie Muggins, and The Rod and Charles Show. There were even some shows that sent my sisters running to turn the radio up like Stu Davis, The Singing Troubador, Folk Songs for Young Folks with Alan Mills, and King Ganam and his fiddle. And how well I remember commercials for such products as Sunlight soap, Sweet Cap cigarettes, Mum deoderant, Drene, White Rain, and Luster Cream shampoos, Eno Fruit Salts, and detergents such as Rinso, Dreft, Breeze, Duz, and Supersuds! And let’s not forget the hockey games so graphically described by Danny Gallivan and Foster Hewitt.

When I was about nine, many of those shows went off the air, and I was lured to television by game shows, soaps, and The Flying Doctor, who introduced me to yet another facet of radio … ham radio. But when I was in grade nine or ten, we were given the opportunity to record a radio dramatization of A Christmas Carol, and I was fascinated anew, especially by the challenge of having to create credible sound effects.

Since then, I have written several radio plays of my own, and my work as a freelance journalist has given me the opportunity to cover everything from murder trials to election nights for several radio stations. Meanwhile, my OTR collection grows by the day. My only frustration is that there is next to no Canadian OTR available, and that’s why I became the founder of COTRA—the Canadian Old-Time Radio Alliance, whose rate of growth, I’m happy to report, is similar to that of my OTR collection.

Be the first to comment on "Old Time Radio Memory: Devon Wilkins: Memories from a Canadian Dairy Farm"