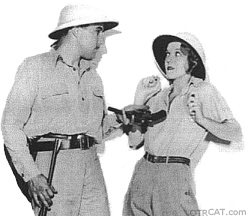 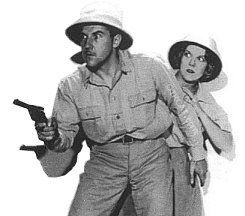 Tarzan of the Apes, created by Edgar Rice Burroughs in 1912, is (along with Superman and Mickey Mouse) one of the most successful fictional characters ever created. It’s doubtful that there’s a single member of Western civilization doesn’t know who he is, even if they’ve never read one of his books, seen his movies or TV shows, or listened to his OTR programs. He’s become a part of our cultural consciousness. 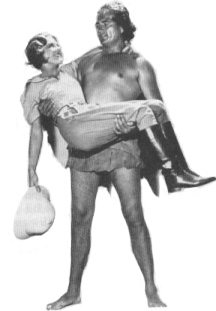 It’s tempting to come up with all sorts of psychological and sociological explanations for this, but the real reason is that Tarzan is just really, really cool. Fearless and intelligent, he met any situation (whether it be a hungry lion, a lost civilization or a damsel in distress) with complete aplomb. He’s the ultimate in wish-fulfillment, always acting capably and bravely in any situation.

Throughout his literary career, Tarzan of the Apes would roam across much of Africa, encountering many more lost civilizations than one would have reasonably suspected could exist. He fought evil humans, lions, panthers, apes and the occasional dinosaur. He was captured quite often, then threatened with execution or slavery or being tossed into a gladiator arena. But he always managed to escape and wreak havoc on his captors. He left Africa a few times, accompanying an expedition to the savage underground continent of Pellucidar and spending part of World War II in Asia stalking Japanese soldiers. But he always returned to his jungle home and to Jane, his beloved but somewhat neglected wife. There were a total of 22 highly entertaining and commercially successful Tarzan novels written by Edgar Rice Burroughs between 1912 and 1947, with several sets of shorter Tarzan stories being collected into two more books after Burroughs’ death.  It’s not surprising that such an appealing and long-lived character would spill over into other media. Countless Tarzan comic books, movies and TV shows eventually sprang up. And, of course, the ape man paid several visits to old-time radio.

Tarzan of the Apes came to radio three times during that medium’s Golden Age. He appeared first in 1932 as a daily serial, broadcast three times a week in 15-minute episodes.  There may have been a bit of nepotism at work here—Jane was played by Burroughs’ daughter Joan and Tarzan by her husband Jim Pierce. But both actors are pretty good in the role and the serial tells a fun, fast-moving story. The uncredited narrator does a fine job as he excitedly gives us blow-by-blow descriptions of Tarzan’s frequent battles against humans, apes, lions and pythons. The sound effects accompanying all this are richly atmospheric and the supporting characters are also well acted. Sadly, only the first 77 episodes of the nearly 300 produced still exist today, cutting the story off in mid-cliffhanger.

The ape man’s last venture into radio was in the early 1950’s with a weekly half-hour show. Tarzan is believably played by Lamont Johnson and the stories cover everything from the ape man being shanghaied by pirates in "The Pirates of Cape Bandeira" to his having to fight a genetically engineered monster in "Tarzan and the Lypagor." Ivory smugglers and slave traders were pretty common. One episode, "The Arena of Death," adapted part of Burroughs’ 1932 novel Tarzan and the City of Gold into a self-contained story.  It’s good storytelling with solid plots and strong production values.

But though both the original series and the 1950s series are entertaining, but my personal favorites are the 1934/36 serials. Both stories, Tarzan and the Diamonds of Ashur and Tarzan and the Fires of Tohr, are absolutely wonderful adventures that remain faithful to the spirit and characters of the original books.

The story for the Diamonds of Ashur, which Burroughs reused for his 1938 novel Tarzan and the Forbidden City, finds Tarzan and his friend Paul d’Arnot escorting an expedition looking for a missing explorer. The explorer is said to have found the lost city of Ashur, which is reputed to be the location of the priceless Father of Diamonds. A rival expedition, interested only in the diamond, is also looking for Ashur.

This made for a large cast of supporting characters, something that radio drama usually shied away from to avoid confusing the audience. But both this serial and its 1936 follow-up, Tarzan and the Fires of Tohr, use a neat trick that allows us to keep track of everyone. The various characters represented a polyglot of nationalities and each had a strong accent. The individual French, German, Swedish, Chinese, and Irish accents identified each character for us, so we never lose track of who is who.

Multiple characters allow the serials to frequently use the technique of frequently shifting from one character’s point-of-view to another at cliffhanger moments to generate suspense. The occasional deaths of a few of the supporting characters, including sympathetic ones, also help in this regard.

Tarzan, by the way, is played by Carlton KeDell, who does a fine job of giving us a sense that Tarzan is highly intelligent, with a strong, fearless personality. 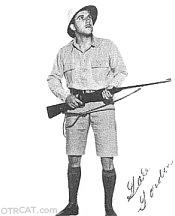 Both serials are extremely well-plotted and represent Tarzan’s finest hour on radio. Burroughs’s input into the productions kept Tarzan faithful to his print counterpart and presented us with interesting and internally consistent societies inhabiting the lost cities.The only weak point is an unavoidable one for a radio series: the ruling casts of both Ashur and Tohr all just happen to speak English. But justifications (albeit slim ones) for this are provided in the stories, so this is easy to forgive.

A third-person narrator is used to describe much of the action, including Tarzan’s hand-to-hand fights with everything from lions to crocodiles to a dinosaur. The overall plots grow quite complex, with the action sequences interwoven with political intrigue, human sacrifice, treachery and characters with hidden motives. These stories are carried coherently through thirty-nine episodes each and come to satisfying conclusions. They are models of precise storytelling and remain a joy to hear today.