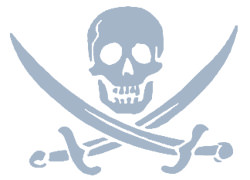 When The Mercury Theatre on the Air began its July 18, 1938 broadcast—an adaptation of Treasure Island—Orson Welles opened the show with the following introduction: We calculate that no decent, law-abiding citizen is immune to pirates. There are cowboys and Indians. There are gangsters and G-men. But these delights are inconstant, like the short skirt. I don’t care how young you are: nothing charms—nothing ingratiates—nothing wins like a one-legged, double-barreled buccaneer with earrings, a handkerchief on his head and a knife in his teeth.

Welles was right, of course. No one is immune to pirates. Or if you are—then by golly, there’s something wrong with you.

During radio’s Golden Age, the medium gave us a number of great stories involving pirates or adventure on the high-seas. The above-mentioned version of "Treasure Island" is one of these. With Welles playing Long John Silver (and narrating the story as an adult Jim Hawkins), the show does justice to Robert Louis Stephenson’s classic adventure novel. 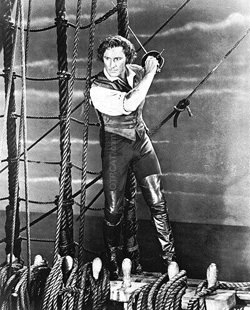 Another entertaining hour of clashing swords, blazing cannon and bloody death had been brought to listeners a year or so earlier, when the Lux Radio Theater adapted the movie Captain Blood into a one-hour radio play. Broadcast on February 22, 1937, the show brought in Errol Flynn to reprise the role he had played to perfection in one of the finest pirate films ever made. A clever and fast-moving condensation of the movie, the Luxversion of "Captain Blood" is yet another high water mark for piracy on radio.

The excellent anthology series Escape also occasionally took to sea while flying the skull-and-crossbones. "Misfortune’s Isle" (from March 21, 1948) starred Paul Frees as an American merchant ship captain in the 19th Century. While at a colonial Spanish port in the Pacific Ocean, he conceives of a plan to attack a nearby pirate base with the hopes of earning a reward for wiping out the cutthroats. But when his plan goes awry, a beautiful stowaway may hold the only hope he and his crew have for survival.

It’s a wonderful episode, dripping with a sense of pure adventure throughout. The plot is well-constructed; the characters are all given distinct personalities and the climatic action scene (involving the pirates trying to board a beached ship) is genuinely exciting. William Conrad does an especially good job playing a fatalistic Chinese merchant who takes part in the anti-pirate raid.

Escape returned to the high seas many times. William Conrad took sail again on June 14, 1953, in an episode titled "Clear for Action." This time, he was the captain of an American warship in the early 19th Century, assigned to hunt down a French privateer. Once again, the plot is expertly woven together with interesting characters and an exciting climatic battle. The sound effects are particularly good--the sound of the ship’s rigging softly creaking in the background in a few scenes, for instance, is perfect for establishing the right atmosphere. Conrad’s performance is again notable—he does an effective and subtle job playing a man who obviously likes and respects his crew, but still maintains an aura of authority around himself when he speaks to them.

"The Cave," aired Christmas Eve, 1950, is about a young boy who stumbles into a fantasy world of pirates and a princess-in-distress. It’s a whimsical tale about the power of imagination and the romantic appeal we all feel for the thought of leaving our mundane real lives behind for a more adventurous and romantic existence.

Pirates popped up elsewhere on radio. The Shadow faced a modern-day pirate using a submarine in a 1938 episode titled "Death from the Deep."  On April 25, 1948, Jack Packard (the protagonist of I Love Adventure) also dealt with a piratical submarine in "The China Coast Incident."

You Are There reminded us that pirates rarely live to old age when it brought us "The Hanging of Captain Kidd" on December 19, 1948. And we discover that it’s a really, really bad idea to shanghai Tarzan, Lord of the Jungle onto your pirate crew in "The Pirates of Cape Bandeira," which was broadcast on April 26, 1951. 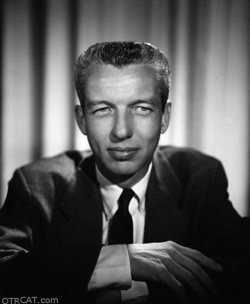 Yours Truly, Johnny Dollar didn’t really deal with pirates per se in "The Molly K Matter," serialized from October 10 to October 14, 1955, but the "insurance investigator with the action-packed expense account" did look into the case of a sunken ship that may have been deliberately scuttled. As was typical of this excellent show, the multi-part adventure builds into a satisfyingly complex mystery before Johnny manages to put the finger on the guilty parties. It all ends in a deadly waterfront confrontation with a killer.

If you want a regular dose of adventure on the high seas, though, there’s no better place to look (or rather, to listen) than The Voyage of the Scarlet Queen. This regrettably short-lived show premiered on the Mutual Network on November 6, 1947. Elliot Lewis starred as Captain Philip Carney, commander of the ketch Scarlet Queen. Tough, smart and loyal to both his crew and the ship’s owner, Carney rarely made a port-of-call without getting kidnapped, framed for murder or simply shot at.

The show had a great premise—Carney was assigned by the Queen’s owner to locate and recover a valuable treasure.  Because a murderous rival was also after the treasure, Carney had to sail an unpredictable course from one Asian or Southern Pacific port to another, picking up information or equipment at each stop. 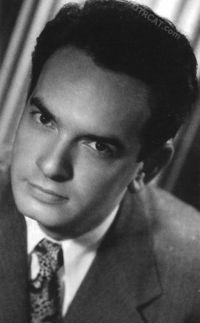 But the villains are rarely far behind and Carney inevitably looks to his fists or his Colt .45 to see him safely back aboard his ship. The show was very much in the hard-boiled tradition, with betrayal, deceit and quite a few femme fatales awaiting poor Carney whenever he dropped anchor. Strong scripts, quirky supporting characters and superb sound effects make The Voyage of the Scarlet Queen a joy to listen to.

We’ve always been fascinated by the romantic idea of pirates; of wind screaming through the rigging during a storm; of cannonballs tearing into a ship’s hull; of sword fights and pistol duels; of the perceived freedom that comes from taking sail across the endless ocean and leaving all our cares behind. Few of us will ever get a chance to turn pirate in real life and I suppose that’s just as well. But we needn’t leave piracy behind completely—some of the best of old-time radio can take us aboard ship to sail the seas of our imaginations.

Be the first to comment on "Pirates of Old Time Radio"