Singer Tony Martin spent his career on the fringes of the A-list but had what was thought of as one of the happiest marriages in Hollywood to dancer Cyd Charise.

Choose your CD format
or order disks individually: Add to Cart Add to wishlist
Play a sample episode from November 11, 1950: 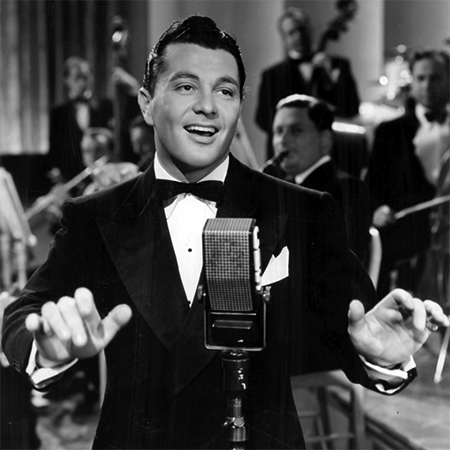 It is understandable that Hollywood's A-list Stars capture all of our attention. If B-lister's were interesting enough to hold our attention, they would be on the A-list, after all. Of course, it does not always work that way. Sometimes those who do not quite make the A-list cut have incredibly interesting lives, not to mention talent, but there just isn't room in the breezy heights for everyone who should be there.

Singer Tony Martin spent his entire career on the fringes of the A-list, even if he never quite made it there himself. In the first band he was paid to play in, he sat next to future great Woody Herman. His first wife went on to become one of the most desired wives in radio (albeit after she married someone else), and his second marriage (which lasted 60 years) was to one of MGM's most beautiful and talented dancers. He recorded for Motown Records, even though his career was partially derailed by the rise of Rock and Roll, is a quadruple-honoree with Stars on the Hollywood Walk of Fame, and commanded $50 per ticket at the age of 96.

Born Alvin Morris on Christmas day, 1913, in San Francisco, he was the grandson of Eastern European Jewish immigrants. At the age of ten, his grandmother gave him a saxophone. He formed his own band, "The Red Peppers" while still a student at Oakland Technical High School before joining local band leader Tom Gerun's outfit. Gerun's other reed specialist was a kid from Wisconsin named Woody Herman. He took a break from the band during the mid-1930's to attend St. Mary's College of California. Even though Gerun kept a job open for him, after college he decided to move to Hollywood and try his luck in pictures and took the stage name of Tony Martin. 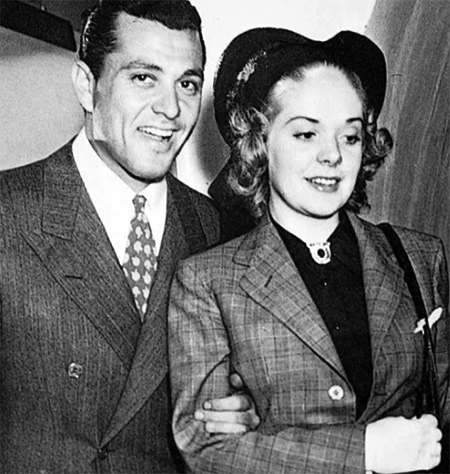 At first, Martin was given mostly bit parts, but he steadily found work, if not top billing, in Hollywood musicals. One of his early roles was as a sailor in Follow the Fleet (1936) with Fred Astaire and Ginger Rogers. The same year, he became the featured singer on George Burns and Gracie Allen's Campbell's Tomato Juice Program (Gracie: "Oh Tony, you look so tired, why don't you rest your lips on mine?")

Another small part was as an uncredited radio baritone in The Poor Little Rich Girl (1936) with Shirley Temple. The picture featured beauty Alice Faye, and a year later Faye and Martin tied the knot. The marriage ended in 1941, and Faye married Jack Benny's bandleader, Phil Harris.

Martin joined the Navy after Pearl Harbor, but he was separated honorably from the service before completing his obligation. False rumors began to circulate that he tried to "buy" his way into an officer's commission, so Martin and the Navy agreed to part ways. He then joined the Army Air Forces and was assigned as a corporal to Captain Glenn Miller's outfit. When he was promoted to Technical Sergeant, he was transferred to India where Brigadier General William Tunner assigned him to enlist personnel from the Burma Air Lift to form an entertainment troupe who performed at various bases in the Far East.

In 1948, Martin married up and coming MGM dancer Cyd Charisse. Tony adopted Cyd's son, Nico Charisse, and the couple had a boy of their own, Tony Jr.  While he was courting Cyd, he served as host of The Texaco Star Theatre, also known as "The Tony Martin Show". Tony and Cyd attended the Hollywood Friars Club Roast for Lucille Ball and Desi Arnaz in November 1958. After comedian Harry Einstein (Parkyakarkus) finished his routine, he collapsed in Milton Berle's lap, which prompted Berle to call for a doctor in the house. It was not a joke, Parke was in actual distress. As Einstein was carried backstage, Emcee Art Linkletter hoped to distract the audience by calling on Tony Martin to sing. In the confusion, the number Tony chose was his 1949 hit which was based on the Italian song "O Sole Mio", the unfortunately titled (for that evening) "There's No Tomorrow". Parkyakarkus died of a massive heart attack.

Cyd and Tony were staunch Republicans and campaigned for Richard Nixon in 1968. In 1976, they published their joint memoirs titled The Two of Us. Cyd Charisse died of a heart attack on June 17, 2008, at the age of 86. Tony knew that the best way to deal with his grief was to work, so he telephoned his agent who booked him into the Rrazz Room at the Hotel Nikko in San Francisco at the age of 96.

Tony joined Cyd on July 27, 2012. They are interred together at Hillside Memorial Park Cemetery in Culver City. Stars on the Hollywood Walk of Fame which honor Tony Martin include one at 6436 Hollywood Blvd for Motion Pictures, one at 1725 Vine St for Television, at 6331 Hollywood Blvd for Recording, and another at 1760 Vine St for Radio. Bob Hope, Roy Rogers, and Mickey Rooney are also four-Star honorees. Only Gene Autry has Stars in all five recognized categories.