During the 1930s and 1940s, many former roadhouses in the American Central and Western States began converting to supper clubs bringing this relaxed atmosphere to the radio waves.

Choose your CD format
or order disks individually: Add to Cart Add to wishlist
Play a sample episode from June 21, 1945: 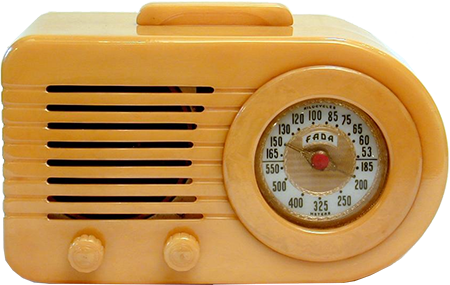 Inns, roadhouses, and taverns were businesses which developed to feed travelers and locals who may not have had someone at home to cook for them. A traveler's need for these services is rather obvious. While traveling on horseback or in a carriage, the goal is to gain as many miles as possible so there is no time gather and cook food. A hot meal and a safe place to rest was welcomed, and an innkeeper on a busy route would expect to make considerable profits. As travel technology improved, many roadhouses were bypassed and they began to cater to the needs of the local populace.

A French innovation was the restaurant. The cook in an inn or roadhouse would prepare enough food for the anticipated number of guests, but it would be a limited selection of simple fare. A restaurant chef would provide a wider selection of delicacies, often prepared to order. The restaurant would also have a professional staff of waiters and servers to ensure the comfort of patrons before and during their meal, but once they had finished their meal diners were expected to move on.

During the 1930s and 1940s, many former roadhouses in the American Central and Western States began converting to supper clubs. Unlike an inn, they did not provide lodging, which meant that their clientele was mostly local. A supper club would have a much simpler menu compared to a restaurant, but patrons were expected to relax and spend the greater portion of the evening at the club. These roadside establishments would not be as swanky as a nightclub in the heart of the city, but the band would be enjoyable and the atmosphere comfortable and relaxing.

Bringing this relaxed atmosphere to the radio waves was the idea behind Liggett & Myers Tobacco sponsoring the Chesterfield Supper Club, beginning in 1944. This was also the type of programming the Armed Forces Radio Service wanted to bring to the G.I.s in its audience, so AFRS was provided with recordings of the program which had all the commercial references removed for consumption by servicemen. The sponsors were more than happy to do their part for the War by providing the recordings, after all, servicemen were consuming plenty of cigarettes already. 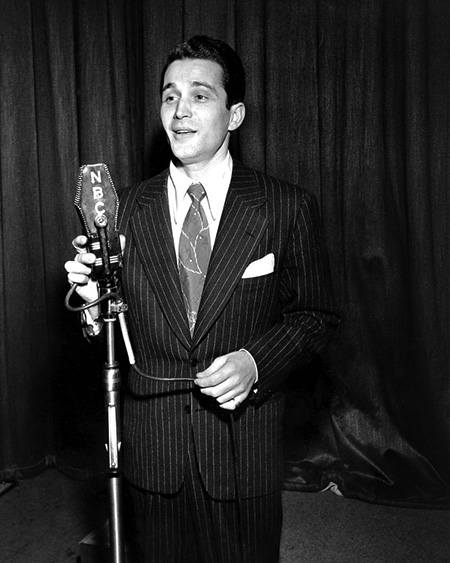 The early episodes of Supper Club were hosted by Perry Como in a quarter-hour live spot, five nights a week. After two years, Como began sharing the hosting duties with pop singer Jo Stafford. Stafford broadcast from Hollywood on Tuesday and Thursday evenings.

Perry Como was "the seventh son of a seventh son", born to Italian immigrant parents in Canonsburg, Pennsylvania, 1912. Papa Como bought an organ for $3, and as a toddler, little Perry would pump the bellows and play by ear. The Como's paid for music lessons for all ten of their children, even though they could barely afford them. As a teenager, Perry worked odd jobs to pay for his lessons and to help the family make ends meet when his father had to leave his mill job because of a heart condition. Despite Perry's growing musical talents, his boyhood ambition was to become "the best barber in Canonsburg", and he opened his own shop when he was 14. When he moved his shop into a Greek coffee house the business boomed and he had to hire a pair of assistants. Naturally, his well-paid mill-working patrons also enjoyed hearing Perry sing while he worked.

Como was swooning on a CBS-sustained program in New York when ad-man Doug Storer came up with the idea for what would become Supper Club. Storer had Como record an audition program which he presented to the agency representing Liggett & Myers Tobacco. They loved the concept but wanted another singer to host. The other singer was under contract elsewhere, and Storer drug his feet getting him released because he was convinced that his Supper Club idea would only work with Como hosting. By the time the sponsor realized what was happening, there was no time to replace Como, and Supper Club helped to launch "the king of casual" to national fame.