Radio serialization of the Novel (circa 1930's)

This is a George Edwards radio production in 52 episodes of the lesser-known Alexander Dumas (le père) novel "The Son of Porthos." Strangely, both the novel and this radio production are mysterious in their backgrounds, for both are relatively unknown and each is questioned by scholars in its field. 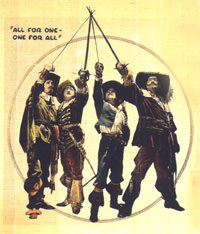 "Son of Porthos" is a lengthy work that tells the story of Joel, son of and a peasant woman from Belle Isle. Joel has grown into a strapping lad, who is now on a search for his kidnapped love, the beautiful orphan Aurore. Ex-Three Musketeer Aramis is still alive, and is (amazingly) now a debauched Duke who is working to make Joel's sweetheart another tart for the King. Aramis is not without some longing for the good old days, however, and is often moodily dwelling on how low he has sunk after his Musketeer adventures. After many adventures, Joel and Aramis are at sword's ends… but neither has known who the other really is! Will Joel find out about Aramis before it is too late? Will Aramis repent? Will Joel succeed in saving his sweetie? The Bastille, drugs, a dwarf, a witch, poison and dueling swordplay all stand in the way! The radio play is full of the wonderfully dense dialogue of the original, giving it a historic sheen that is rarely found in "modern, made-for-TV American "historical" movies.

Whether this is actually a book written by Alexandre Dumas le père, or written by another and just published under his name is a matter of continuing literary conjecture. As for the mysterious George Edwards productions, of which there are quite a few, the scholars are equally as fuzzy as to details. Researcher Mike Ogden's investigations have uncovered the likelihood that leading actor George Edwards' production. A well-respected collector relates, "My own recent and ongoing collecting… makes me tend to believe that they must be , too. These serials all originate from the 1930's. In a nutshell, these plays are excellent with good casts and superb full orchestral accompaniment. I highly recommend the Dr Jekyll and Mr Hyde and Frankenstein serials, they're really great."