James Stewart's Radio vehicle, The Six Shooter, is bound to draw comparisons with Gunsmoke, but they are very different high-quality programs. Jimmy Stewart plays the honorable drifter Britt Ponsett in the well-made Western, The Six Shooter.

Choose your CD format
or order disks individually: Add to Cart Add to wishlist
Play a sample episode from January 17, 1954:

The man in the saddle is angular and long-legged his skin is sun-dyed brown
the gun in his holster is gray steel and rainbow mother-of-pearl, its handle unmarked.
People call them both "the Six Shooter."

Western on the radio began as kiddie fare with a definite division between the "white hat" good guys and the "black hat" villains. Although they were created for the younger set, producers noted that they had a great deal of appeal to grown-ups as well. In the Late-Forties "adult Westerns" began to rise in popularity. Adult westerns dealt with issues beyond good versus evil, the growing sub-genre looked at questions of right and wrong. 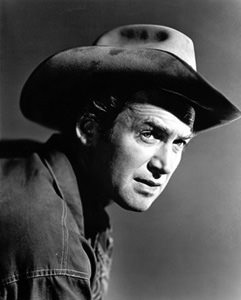 Although there were a few earlier examples of Adult Westerns on the Radio, Gunsmoke, which debuted in 1952, has been largely credited as bringing the sub-genre to radio prominence. Praised for its 'gritty reality', Gunsmoke episodes often ended with a tragic twist and good-guy Marshal Matt Dillon would not always win.

NBC had to answer Gunsmoke's success and did so with The Six Shooter starring James Stewart, debuting September 20, 1953. Stewart, who was not only at the top of the Movie Business's A-list but was also a genuine War Hero, having entered the Army Air Corps as a Private and commissioned a 2ndLT soon after Pearl Harbor. Although he was still under contract with MGM, he served for a time with the First Motion Picture Unit before demanding a combat assignment. After instructing pilots in New Mexico, Stewart was sent to England as part of the 445th Bombardment Group and piloted B-24 Liberators over Germany.

While many Radio Row figures worked the airwaves while waiting for their film careers to take off, James Stewart was interested in radio work as a change of pace. He had appeared on several programs in support of his films but had yet to have a recurring role on the radio, so he brought enthusiasm as well as his talent to the role of Britt Ponset.

Comparisons between Marshall Matt Dillon and Britt Ponset are inevitable. Both are experts with their guns but are weighed down by the realization of the finality of solving problems with gunplay. With this in mind, both Ponset and Dillon tried to avoid pulling their guns and were nearly always more than justified when they did. The biggest difference was the worlds the two men lived in. 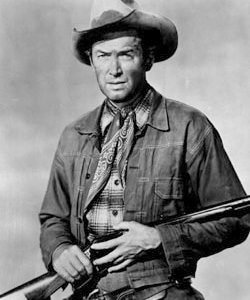 Dodge City represented the encroachment of civilization on the wild frontier, and Marshal Dillon represented the authority of Law and Order. Britt Ponset was a mythical wandering cowboy; although he respected the domesticating influence of civilization he would not allow himself to be tied down by it. He shared a sense of justice with Marshal Dillon, but while Dillon would end his adventures by returning to Dodge and his friends, Ponset would ride off into the sunset afterward, bound to find another injustice unfolding around the next bend in the trail.

Sadly, even though it was one of the best produced and acted Westerns of the OTR period, The Six Shooter lasted just a single season. Of 39 episodes. Liggett & Myers Tobacco was anxious to underwrite the project to pitch Chesterfield Cigarettes. However, recognizing that an association with cigarettes could damage the 'good guy' reputation which was so vital to his movie success. Coleman Outdoor Products signed on to pitch their Home Space Heaters, which was enough for the network to give the show a green light. After the first four episodes, Coleman dropped their sponsorship. Still unwilling to accept cigarette sponsorship, The Six Shooter finished the season as a network sustained program. Given Stewart's Star-appeal and the quality of the program, surely a sponsor outside of the tobacco industry could have been found, but the Star and Producers seem to have been satisfied in creating just 39 episodes of some of radio's best rather than extending the project.