A showcase variety show for the Sweet-Music classical-based sounds of Freddy Martin.

"Girl That I Marry"

The "Showtime" format is a popular and fun wrinkle on the variety show. The Variety Show has its roots in music hall and vaudeville traditions. The more different new acts a theater owner could book into his hall, the more audiences would return to see them. Rather than simply putting on a show, the showtime format allowed the company to show the audience that they were putting on a show. The technique acknowledges the "fourth wall" and makes the audience part of the action. 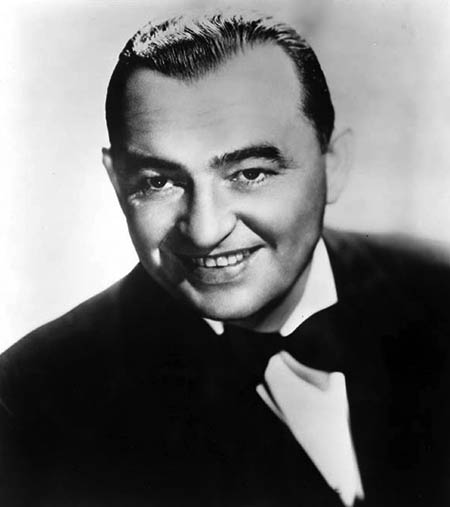 Showtime from Hollywood was a syndicated program recorded sometime in the late 1940s. The episode opens with the sounds of a film scene "take": a technician sounds a buzzer for quiet on the set, another coordinates sound synchronization, the camera begins rolling, and the director calls for "Action!".

At this point, Showtime from Hollywood plays several seconds of introductory music to allow for a local sponsor announcement and then departs the variety format altogether and becomes a showcase for Freddy Martin and his Orchestra, his Saxophone, and the Martin Men featuring Stuart Wade.

Freddy Martin grew up in a Cleveland, Ohio, orphanage where he began to play the drums before taking up the saxophone. In high school, he led a dance band and worked part-time as a salesman for the H.N. White (King Musical Instruments) Company. When Guy Lombardo based his Royal Canadians in Cleveland in the late Twenties, Freddy brought his samples by. Lombardo did not buy any instruments, but he was impressed enough with Martin's musicianship that he recommended the youngster's band when the Royal Canadians could not make a gig.

Most dance band leaders had a Jazz background while Martin had more of a classical foundation. Martin was an early pioneer of the "sweet-music" style during the big band era. While most "sweet" bands specialized in dulcet chords and just enough rhythm for a guy to hold his girl close, Freddy's arrangements might be based on Tchaikovsky, another of the classical masters.