One of the most important and influential American literary figures of the twentieth century, Robert Frost gave voice to a rural New England at a time that America was becoming more urbanized. 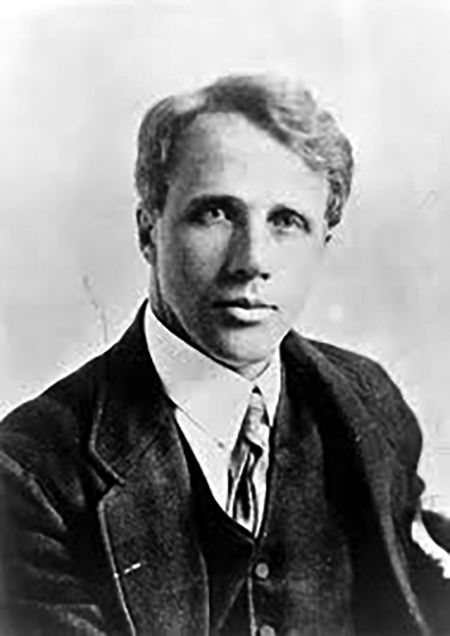 One of the most important and influential American literary figures of the twentieth century, Robert Frost gave voice to a rural New England at a time that America was becoming more urbanized. He reminded us not only to appreciate the natural world but that we are a part of that world. Attitudes towards Frost’s poetry has changed over the years as American society has changed and matured, but one thing remains the same; even if we are serious, we can be happy.

William Prescott Frost, Jr, left his New Hampshire home to find his fortune as a journalist in the rollicking frontier city of San Francisco. He worked as a teacher and married Scottish immigrant Isabelle Moodie, who also taught. Robert Lee Frost (named for the Confederate General) was born in 1874 and spent his first eleven years in the City by the Bay. His father’s drinking and gambling left the family in dire financial straits. When he succumbed to tuberculosis in 1885, his dying wish was to be buried in his native New Hampshire.

Isabelle loaded her family on the train east to escort the corpse home to Lawrence, New Hampshire, and she began teaching again when she reached New England. Growing up in a teacher’s household, Robert was exposed to books and learning from an early age. He also developed a love of the outdoors while traipsing through the New England countryside. He graduated at the top of his class from Lawrence High School, where he excelled in Latin and Greek, history, botany, and football. He was sweethearts with his co-valedictorian, Elinor Miriam White. After high school, he enrolled in Dartmouth College, but after two months he became disenchanted with campus life at the Ivy League School.

Returning home, he took several jobs, including teaching, delivering newspapers, and maintaining carbon arc lamps in a factory, but always felt that his true calling was poetry. In 1894, he sold his first poem, "My Butterfly. An Elegy", to the New York Independent. Flush with success, he proposed marriage to Elinor, but she put him off, wanting to finish college. Robert left for a reckless journey to Virginia’s Great Dismal Swamp, and by the time he returned Elinor had graduated, and they married in December 1895.

Frost made another attempt at college, this time at Harvard, from 1897 to 1899, but left due to health issues (although several institutions would grant Frost honorary degrees, he never completed his undergraduate work). Just before he passed away, Frost’s grandfather bought a farm in Derry, New Hampshire, for Robert and Elinor. Although Frost was less than successful as a poultry farmer, he derived a great deal of satisfaction tending the orchards, taking care of the chickens, raising vegetables, and farm life in general. Elinor bore six children while on the Derry farm, but two died in infancy.

Robert wrote prolifically in Derry. In 1912, they sold the farm and sailed for Great Britain, settling in Beaconsfield, a small town outside of London. Frost sold his first book of poetry, A Boy’s Will, in 1913, and North of Boston, in 1914. He was accepted into the community of poets working in England, including the American Ezra Pound. Pound would become the first American to write a review of Frost’s poetry, recognizing it for the importance it would develop. 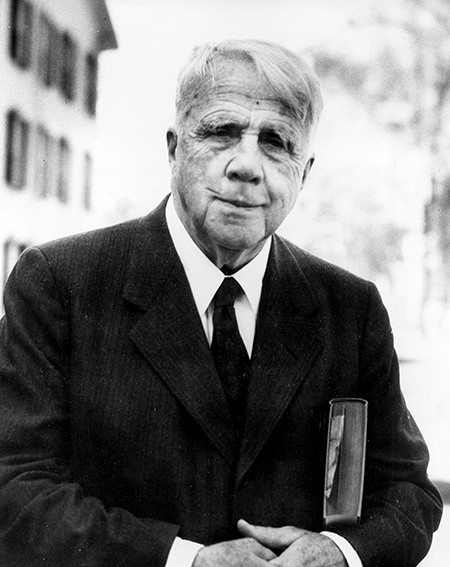 When World War One began to make things uncomfortable in Britain, the Frost’s returned to New Hampshire and bought a farm in Franconia. Robert spent his time writing, teaching, and lecturing rather than working the farm. He taught English at Amherst College during several different periods between 1916 and 1938, encouraging his students to embrace the tones and nuance of spoken English in their writing. He won his first Pulitzer Prize in 1924 for the book A Poem with Notes and Grace Notes.

Robert Frost’s poetry is best known as a celebration of rural life and the natural world. Interestingly, he was primarily a "city boy" until moving to the Derry farm at the age of 28. During his lifetime, Frost sometimes complained that his best-known piece, "The Road Not Taken", has been misunderstood. Generations of readers have taken the poem as encouragement to choose an unconventional or unexpected alternative in life’s journey. Frost insisted that the stanzas were inspired in a moment of self-mocking while mired in indecision. He sent an advanced copy of the poem to his friend, English writer Edward Thomas, after returning to New Hampshire in 1915. The poem helped Thomas to make the decision to enlist for service in WWI. He was killed two years later during the Battle of Arras.

Only two of Frost’s children outlived their father. His mother died of cancer in 1900. Two of his and Elinor’s children died in infancy. Son Elliot died of cholera in 1904, wife Elinor died of a heart attack in 1938, and son Carol committed suicide in 1940. Frost’s writing slowed after the Second World War. He read his 1941 "The Gift Outright" at John Kennedy’s inauguration in 1961, and lines from "Stopping by Woods on a Snowy Evening" (1922) were featured in Kennedy’s eulogy.

Robert Frost died on January 29, 1963, in Boston of complications from prostate surgery. He was 88 years old. His epitaph comes from the 1942 poem, "The Lesson for Today":

"I had a lover’s quarrel with the world."