Choose your CD format
or order disks individually: Add to Cart Add to wishlist
Play a sample episode from September 10, 1948:

Paul Frees has rightly been called "the Man of a Thousand Voices." Yet much of his work is unaccredited, because so much of it is voice over and bit parts. He is very fondly remembered as the unseen "Ghost Host" in Disneyland's attraction, "The Haunted Mansion." 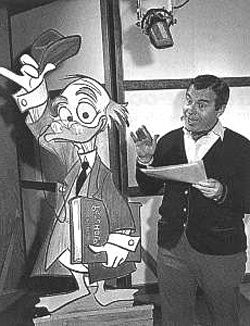 Born in Jun of 1920, Paul Frees was gifted with an amazingly perceptive ear, and a highly versatile, four octave range voice. His early radio work was cut short when he was drafted during WW2, and wounded during the invasion of Normandy. Using the GI Bill he attended the Chouinard Art Institute, but had to cut his studies short due his wife's failing health, and return to radio work.

He made frequent appearances on A-list programs of the time. The Player was his first solo endeavor, in which he played all of the characters and narrated.

Frees had a great deal of work in the movies. Unlike other voice actors who would remain working for one animation studio, Frees did extensive work for at least nine major Animation production companies. Familiar characters voiced by Frees include Boris Badenov, Professor Ludwig Von Drake (Donald Duck's uncle,) the Little Green Sprout, the Pillsbury Doughboy, the Ape in "George of the Jungle,"  Toucan Sam, and John Lennon and George Harrison in the 1965 "Beatles" cartoon series. Paul Frees died suddenly of heart failure in 1986.

Please note: this collection is included in the extensive Paul Frees Collection.