One of Jack Webb's earliest successful attempts at crime drama with enough hard-boiled metaphors to sink a ship!

Choose your CD format
or order disks individually: Add to Cart Add to wishlist
Play a sample episode from March 27, 1949:

"Down in the waterfront, in San Francisco, you always bite off more than
you can chew. It's tough on your windpipe, but you don't go hungry." 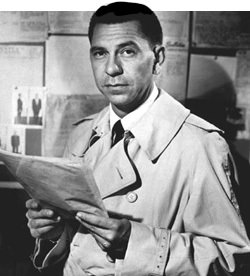 The character Pat Novack is based in San Francisco, CA and owned a boat repair/rental shop on the pier during the day and fought crime during the night, but still had time for clever quips:

Inspector Hellman is played by Raymond Burr (Perry Mason) who often arrests Pat Novak for the crime in each episode.  Sidekick, former doctor, and drunk Jocko is called in to help Pat Novak not only prove his innocence but find the guilty party.

The conversation between characters is archetypical hardboiled detective dialogue with enough metaphors to sink a ship!  The show is well written with plenty of memorable one-liners and gritty dialogue:

"She stood leaning there for a minute, sort of a girl who moves when she stands still. She had blonde hair. She was kind of pretty, except you could see somebody had used her badly, like a dictionary in a stupid family."