McGarry and His Mouse

Based on a series of short stories, Rookie Detective Dan McGarry and his mouse, the smart and pretty Kitty Archer, solve crime and fight bad guys in this old time radio show.

Choose your CD format
or order disks individually: Add to Cart Add to wishlist
Play a sample episode from June 26, 1946: 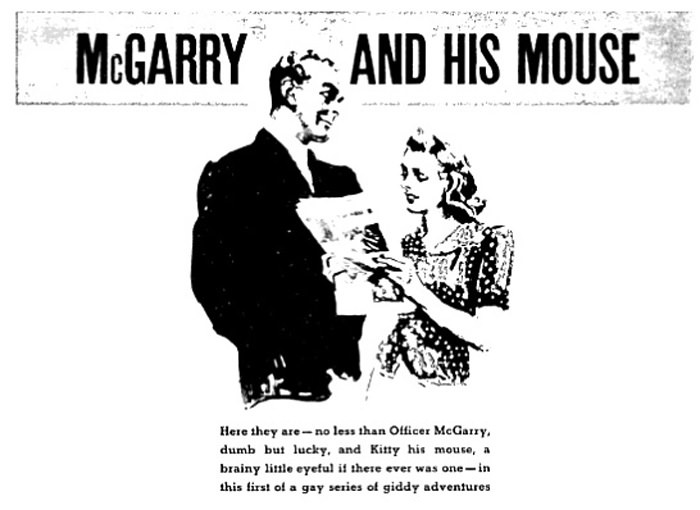 Police stories have always been a favorite of Old Time Radio audiences. We have the highest respect for the sacrifices they make, and the risks that they are willing to take on behalf of the community they serve. Listeners would thrill to hear the adventures of our radio lawmen, whether they were on Gangbusters, Calling All Cars, The FBI In Peace and War, or Tales of the Texas Rangers, or the exploits of individual lawmen, like Sgt Friday on Dragnet or Marshall Matt Dillon on Gunsmoke.

The cop is a tough, fearless figure for us to respect and admire. Unless he isn't.

Rookie Detective Dan McGarry reminds us that at the end of the day, a policeman is a working stiff, just like the rest of us. Well, maybe not so much like the rest of us. Perhaps more like Chester A. Riley on the Life Of Riley. It is no secret that Dan McGarry would have gotten nowhere on the police force if not for the good graces of a favorite uncle, who happens to be the Chief Inspector. McGarry's luck goes beyond having the right Uncle. There is also his "mouse', the pretty Kitty Archer, a smart girl with enormous confidence in the young man.

McGarry and His Mouse began as a series of short stories in the This Week magazine supplement which was syndicated to a number of newspapers around the country in 1940. The series delighted readers through the War years, and finally landed on NBC in 1946 as a summer replacement series starring Wendell Corey and Peggy Conklin. The series went through a number of stars (and networks) over the next few months. A television pilot was green-lighted at the end of 1957, but the series never made it onto the fall lineup.