The daughter of a circus performer and a flamenco dancer, Margaret O'Brien got into the movies at age three and was known as the "best crier" in the lot!

Child Stars were a necessity for the studios, especially for MGM who built a reputation for producing wholesome, family fare. Anyone who was familiar with the business knew that a movie lot was far from being a wholesome, family friendly environment. A movie lot is a work place, just like a factory anywhere in the world, and like workers anywhere under pressure, tensions can run high and language can become salty. 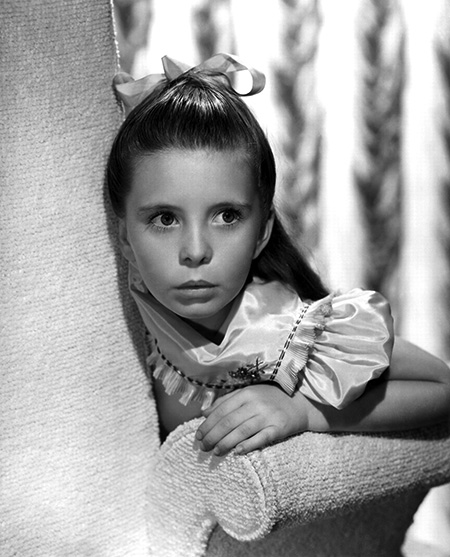 Having kids on the set, especially kids working in front of the camera, meant that certain precautions had to be taken, and those precautions often meant inconvenience and sometimes considerable investment for producers and the studios. There were already a variety of teachers on the MGM lot as part of their "Movie Star Factory" giving diction, dancing, singing, and acting lessons, but if these professionals didn't do their job it meant that a Starlet may not have been as prepared for a part she wanted. A school teacher working with a child star could bring an entire production to a halt if the kid failed a math quiz or forgot to do her geography homework. The mother of a child star could be even more difficult to work with than a beauty queen, but if the mother was not happy, it would be impossible to get a great performance from the kid.

Over the years, child actors brought a lot of money in for the studios, some of them successfully made the transition to grown-up parts within the studio system while others found their services were no longer necessary by the time they reached the age of consent. After growing up in the insanity of the studio system, some were relieved to take "normal jobs" and live out their lives in relative obscurity.  It is likely that Margaret O'Brien could have made the transition to grown-up film roles, but by the time came for her to make that move the studio system was beginning to collapse.

Margaret was born in San Diego, California, 1937. She never knew her father, Lawrence O'Brien, who was a circus performer who passed away before her birth. Mother Gladys Flores was a flamenco dancer. Margaret was only three years old when former child star Mickey Rooney (only 21 at the time, arguably still a child star although the veteran of 135 films at the time) approached her on the set of Babes on Broadway (1941) saying "Hello, the cute little girl!" Margaret was given an important part supporting Larraine Day and Robert Young in the propaganda film Journey for Margaret (1942). She played a homeless waif orphaned by the London blitz, and in one scene has to learn to cry for the parents she had lost to the bombs. Crying convincingly would become one of O'Brien's trademarks. 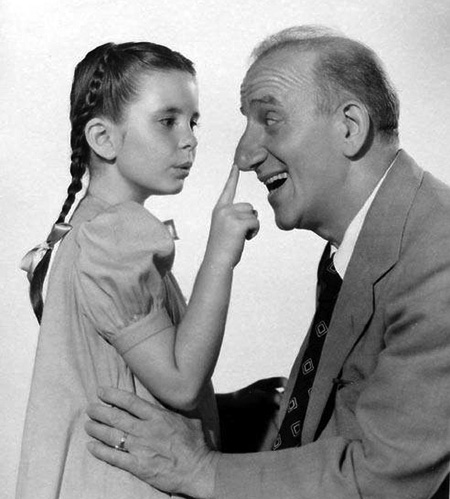 Perhaps Margaret's greatest movie success came in support of Judy Garland in Meet Me in St. Louis (1944). Just before shooting began, Gladys got in touch with Louis B. Mayer and demanded $5,000/week for her daughter's services. When Mayer balked and threatened to use a look-alike, they traveled to New York. Mayer caved in and gave Margaret the raise, which meant she made the same amount as Judy Garland on the picture. While it would be a stretch to say that little Margaret "stole the show" from the Wizard of Oz (1939) veteran, she was awarded Juvenile Academy Award for playing Tootie, the younger sister of Garland's character, the same Award Judy had received for her work in The Wizard of Oz just five years before. O'Brien had been given the role partly because of her reputation as one of the best "criers" on the MGM lot. However, she seemed to be having so much fun on the shoot that the tears would not come. Mother Gladys came to the rescue when she told Margaret that "June Allyson is a better crier than you!"

By the time Margaret was ready to negotiate the contract that would have been the foundation for her move into more mature roles, MGM, whose specialty had been big-budget films, was losing audience share to Television. Her mother asked Mayer to release her six months early from her contract. Margaret was up to voice the lead in Disney's Alice in Wonderland (1951) but Gladys got into a heated argument with Walt Disney and another MGM actress, Kathryn Beaumont, got the part.

Gladys and Margaret lived in a nice home in Beverly Hills. When her mother got sick, the maid asked if she could take Margaret's Oscar and some other awards home to polish. Gladys passed away suddenly, and while in mourning it was some time before Margaret realized that neither the maid nor the Oscar had returned. Thirty-seven years later, a sports memorabilia collector spotted the miniature Oscar at a flea market and bought it to sell at auction. When he discovered that it was a genuine but stolen artifact, he got in touch with the Academy and eventually with Ms. O'Brien. The collector declined a reward but asked to be photographed returning the statuette to O'Brien so he could brag to his friends that he had presented an Oscar.

Two Stars were placed on the Hollywood Walk of Fame in 1960 to honor Margaret O'Brien, one at 6636 Hollywood Blvd for her work in Motion Pictures, the other at 1672 Vine St for Television.