There is supposed to be one girl out there for every guy, but when there is a Love Triangle there is nothing but trouble.

Choose your CD format
or order disks individually: Add to Cart Add to wishlist
Play a sample episode from September 05, 1943: 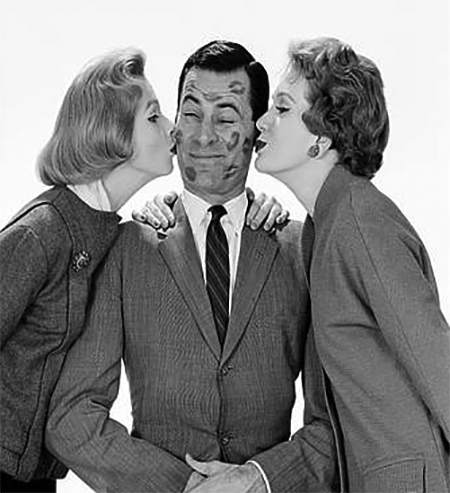 Boy meets Girl or Girl meets Boy; it doesn't really matter as long as they meet their one true love. The creators of romantic stories would have us believe that there is one true love out there for everyone, a notion that brings hope to lonely hearts around the world. However, love triangles spit in the eye of that romantic notion, although they do make for great romantic stories.

In romance, a triangle is the most unstable form. Love triangles come in a few different forms; typically, the girl is in love with two different guys and it is up to the men to decide which one gets the girl. Sometimes one of the guys resorts to a nefarious plot to get rid of the other bloke, but in a real tear-jerker both are good guys and one will allow his buddy to be happy. Another stinker version of this arrangement has the gal manipulating one guy to get rid of a lover she has grown tired of; even if they are successful, the replacement beau's days are numbered.

There are also stories of two girls after the same guy, but the rules are not quite the same. A common situation has one of the girls seeming more attractive while the other is truer and more virtuous. Woe be to the joker who chooses the wrong gal! A similar set up to the guy who heroically gives up the girl can occur in the 2 Girls, 1 Guy set up, but rather than the girl who gives up the guy for her pal being a heroine, she usually winds up being the truer and more virtuous choice the guy should have made in the first place.

If there is a common moral to Love Triangle Stories, it is that when you find your true love, hold on with both hands.