Choose your CD format
or order disks individually: Add to Cart Add to wishlist
Play a sample episode from October 10, 1943: 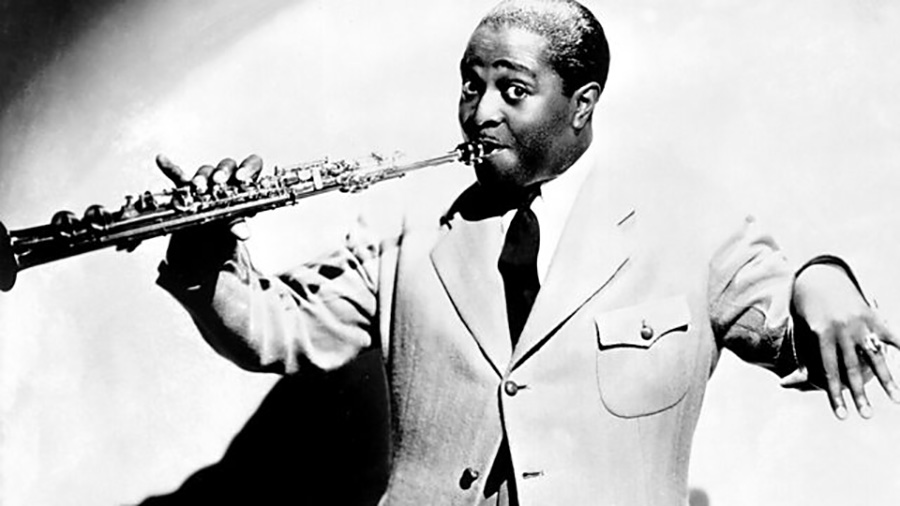 It is generally accepted that the music we know today as Rock & Roll was developed in the late Forties and Fifties, evolving from popular Jazz, as well as Gospel, Blues, Boogie-Woogie, and even Country Music. A common feature of these musical influences is their roots in "Ethnic Music", even Country Music.

"Ethnic Music" is a euphemism used by Record Label Executives for "Negro Music that we probably should not let White Kids listen to but we still want their money!" Such was the hypocrisy that pervaded so much of post-War society, especially when it comes to Race. However, there is no denying that Rock Music had an incredible influence on the generations that came after WWII.

A good deal has been written on the contributions of the White Artists who were brave enough to "expose" Black music to White audiences, but less has been said about Black artists they were imitating. Bandleader and saxophonist Louis Jordan became known as "The King of the Jukebox" and was post-humorously inducted into the Rock and Roll Hall of Fame as an Early Influencer.

A native of Brinkley, Arkansas in 1908, it was obvious that Louis had a passion for music from an early age. His father was a bandleader and music teacher who started teaching Louis to play the clarinet at age seven. One day, Louis spotted a shiny saxophone in a music store window and was entranced by the instrument's beauty. After a summer when he "ran errands all over Brinkley", the sax was his. 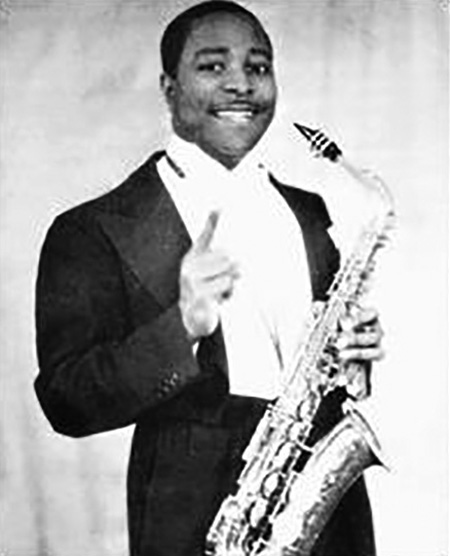 During his fifteenth summer, young Jordan landed his first professional gig in Hot Springs, Arkansas. He played with several minstrel and dance band outfits throughout the South and Midwest before majoring in music and playing baseball at Arkansas Baptist College in Little Rock. Around 1930, Louis settled briefly in Philadelphia, playing trumpet for the Charlie Gaines Orchestra and tuba for the Jim Winter's Band. Two years later, he moved on to New York City with the Gaines outfit.

While in New York, Jordan played and recorded with several bands before landing his most important seat with Chick Webb's 13-piece band. However, the bandleader was a suspicious sort who fired Jordan when he thought that the younger artist was going to "steal" some of his players to start his own band. Louis was, in fact, considering striking out on his own, so was able to take the dismissal in stride.

Jordan was happier playing in a smaller outfit and created the Tympany Five band, although the combo would usually count six or as few as four players, none of whom played the tympani drum. Working his own outfit also allowed Louis to begin experimenting with a new form of music, Jump Blues.

"Raucous" Jump bands combined the emotion of Delta Blues with the free-wheeling fun of Boogie-Woogie. The Smithsonian wrote of Jordan's stylings, "his music melded elements of swing and blues, incorporating the shuffle rhythm, boogie-woogie bass lines, and short horn patterns or riffs." Some of Jordan's Jump Blues hits include:

Crossing racial lines, Jordan and his Tympany Five managed to appeal to both Black and White audiences. This fact comes down to the group's innovative and fun musicianship, but credit should also be given to Jordan's talents as a bandleader and manager. Although he presented a casual and fun-loving outward appearance, he insisted that his players be thoroughly rehearsed and be well dressed "even down to their shoes". At his own expense, Jordan provided each band member with six or seven "uniform" suits in multi-colored post-Zoot Suit fashion.

The waning popularity of Big Bands in the post-War period played into the hands of the smaller Tympany Five. "With my little band, I did everything they did with a big band. I made the blues jump," Jordan would explain to an interviewer. However, in the early Fifties, he decided to disband the Five and start a sixteen-piece outfit. The new band did not find particular success. He left Decca in 1954 and recorded for several independent labels for a while. Health concerns forced him to give up on one-night stands and he settled for several years in Phoenix, Arizona. For several years, Jordan played occasional month-long engagements in Phoenix, Las Vegas, and New York City.

While performing in Sparks, Nevada in October 1974, Louis Jordan suffered a heart attack. After being released from St. Mary's Hospital in Reno, he returned to his home in Los Angeles, where he passed away on February 4, 1975. He was 66.

When Louis Jordan was inducted into the Rock and Roll Hall of Fame in 1987 he was hailed as "The Father of Rhythm & Blues" and "The Grandfather of Rock and Roll". His 1949 recording "Saturday Night Fish Fry" is in contention for being the first Rock and Roll record and is an early example of Rap.

Rock scholars have supposed that Chuck Berry modeled his early music on Louis Jordan's style changing Jordan's lyrical leanings toward food, drink, and girls to more audience-acceptable cars and girls. Notable is the similarity in the opening riff of "Johnnie B. Goode" to that of "Ain't That Just Like a Woman (They'll Do It Every Time)" (1946). Little Richard also admitted to his debt to Jordan, stating that "Caldonia" (1945) was the first non-Gospel song he learned. The flamboyant singer's iconic "Whoop" was also inspired by Jordan.

"Whoop" might be a defining element of Jump Blues and the Louis Jordan sound.