Sea Stories are among the most sweeping and dramatic of all, and few told them with as much majesty as Joseph Conrad.

Scholars continue to debate whether the works of Joseph Conrad should be read as the product of a sailor who became a writer or as a writer who sailed. Most will agree that Conrad was one of the greatest English Novelists who grants us an eerily intimate perspective on the world from a time when the sun never set on the English Empire. Interestingly, the Greatest of English novelist was not a native English speaker, he was born Józef Teodor Konrad Korzeniowski in Polish Ukraine, 1857. His parents were part of the lower Polish nobility; his father, Apollo, was an intellectual and an activist against the oppression of Imperial Russia. Before Joseph was five, the family was exiled to a gulag north of Moscow where mother Ewa succumbed to tuberculosis. Apollo's sentence was eventually commuted, and he did his best to tutor his apparently gifted son, exposing the youngster to the works of Victor Hugo, Shakespeare, and Polish Romantic poetry. Joseph was ten when his father also succumbed to tuberculosis.

The youngster went to live with his mother's brother, Tadeusz Bobrowski, who found Conrad to be intellectually gifted but resistant to the formalities of school (geography was the only subject he excelled at). Bobrowski encouraged Conrad to pursue strenuous activities and hoped that learning a trade might center him. In the fall of 1874, sixteen-year-old Conrad went to Marseilles to seek a career at sea, but he was admonished by his patriotic uncle that; "wherever you may sail, you are sailing towards Poland!"

After four years of sailing on French merchant ships, Conrad crossed decks to sail under the Red Ensign of the British Merchant Fleet. He worked his way up through the ranks while making the transition from sail to steam, eventually achieving the rank of captain. These postings took Conrad to several locations in what would later be termed "developing nations" and gave him a first-hand perspective of human conditions under the British Imperium and European attitudes toward "natives".

After serving as First Officer aboard the clipper Torrens on the Adelaide-London route, Conrad reluctantly left his life at sea because of deteriorating health. Before disembarking Torrens in London on July 26, 1893, he struck up friendships with English writers Edward Lancelot Sanderson and John Galsworthy. These are thought to be Conrad's first English friendships outside the circle of the maritime fraternity, and they encouraged him to explore his talents as a teller of stories.

When Conrad began writing, his editor, Edward Garnet, worried that his lack of familiarity with English writing would preclude sales. However, this forced Conrad to see perfection in his language and idiom usage. To many readers, it is obvious that despite Conrad's technical mastery of the language, the text is being interpreted from thoughts in a foreign tongue. Rather than holding the material back, it lends an authenticity to the work which struck a chord in the late Victorian Age.

Conrad calls into question the implied superiority of Europeans over native peoples during the age of Empire, and his characters are often less than noble persons placed in responsible positions. A frequent device in his writings is the tradition of sacrifice and noble bravery on the part of seafarers being abandoned to allow a protagonist to save his own miserable hide. These notions would not lead to immediate reform during the Edwardian period but did allow Englishmen to question their place in the World as international politics began winding toward the yawning chasm of the Great War. 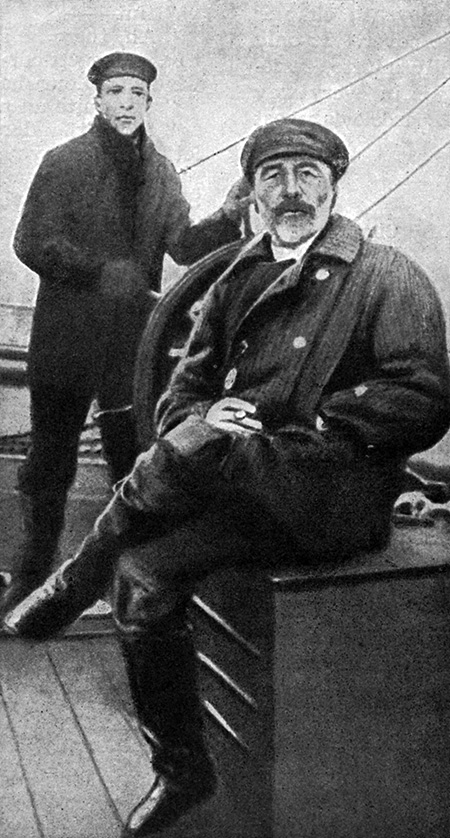 Although his early adventure novels were highly successful, Conrad was a miserable manager of funds and he lived in a state of poverty. His writing became more politically relevant as the Great War approached. His highly personal novel, Chance (1914) was another financial success and with its publication Conrad's American agent was able to make arrangements that kept Conrad in financial security for the rest of his life. In 1923, he made a triumphant tour of North America, the following year he turned down a knighthood in Great Britain. On August 3, 1924, Joseph Conrad suffered a fatal heart attack at his home in Kent. He was interred at Canterbury Cemetery.