Although she was set up as a rival to Doris Day, Janis Paige has enjoyed a long and successful Hollywood career.

As cut-throat as the movie industry can be, it is only natural that a few well-publicized rivalries would arise. Some disputes arise over social matters like personal insecurities, infidelity, or even imagined snubs at a party. Often, a rivalry arises when two Stars compete for a role they are both "perfect" for. These rivalries make for great tabloid headlines, so much so that the press can be guilty of reading more into Hollywood rivalry than is really there. Especially in the case of casting rivalries, most Hollywood Stars are professional enough to realize that those decisions are made for business, not personal reasons, but that does not keep the press from squeezing all the juice they can from the situation.

One situation the gossip mills made the most out of was the rivalry between Doris Day and Janis Paige for Pajama Game (1957). The two starlets had co-starred together in Romance on the High Seas (1948), which was also Doris's movie debut. Janis got her boost to full stardom by starring in the original Broadway version of Pajama Game (1954, 1063 performances), but when the decision to make a film version after the show closed in November 1956, the entire Broadway cast reprised their roles except for Janis. The role turned out to be a breakout role for Doris Day, and probably would have done the same thing for Janis, so some bitterness would have been justified. However, as Ms. Paige explained in a 2014 interview, "The truth of it is that the film was offered to Frank Sinatra, who would have been a fantastic Sid... Then they sent the script to Doris. The word out was they wanted to use as many members of the original company as they could. So if Frank had accepted the role, I would have done Babe. And if Frank turned it down and Doris took it, then John Raitt would have done it, which is exactly what happened."

Born Donna Mae Tjaden in Tacoma, Washington, 1922, she is a popular young girl who sings at local events even though her parents separated when she was four. In high school, she studied typing and shorthand and sang with the Tacoma Opera Company. After graduation, her mother accompanied her to Los Angeles where she got a job singing to servicemen at the Hollywood Canteen. This is where she was discovered by a scout from Warner Bros and awarded a $150/week contract. During the War years, she was named "Miss Atomic Energy" and "Miss Delicious Apple" in local pageants. She made her film debut after changing her name for Bathing Beauty (1944) starring Red Skelton and Esther Williams. Before shooting Romance on the High Seas she is named "Miss Damsite" at the opening of the McNary Dam in Hermiston, Oregon. 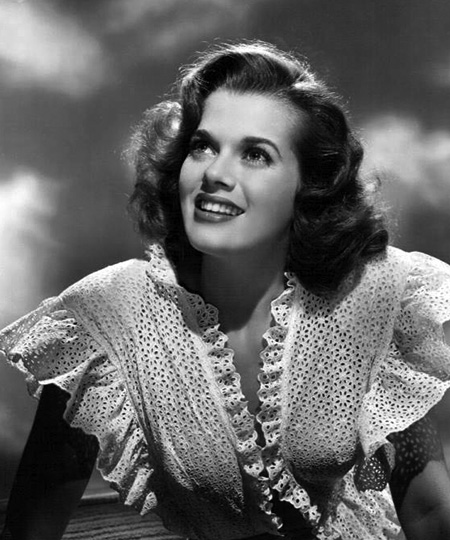 Disappointed with her film career to date, in the early Fifties, Janis took a break to concentrate on Broadway and night club appearances. After Pajama Game closed, she was appearing at the Cocoanut Grove in Los Angeles where she was approached by MGM producer Arthur Freed. When Freed told her he wanted her for a film where she would dance with Fred Astaire. From the 2014 interview: "I said, 'Oh, Mr. Freed, I can’t dance with Fred Astaire, I'm not a dancer. And he said something so cute, he said, 'Oh Janis, you know how studios are. You know how Metro is — you'll be dancing by the time we’re through with you." Critics later said that she "stole" Silk Stockings (1957) from Stars Astaire and Cyd Charisse. Janis co-starred with Doris Day again in Please Don't Eat the Daisies (1960).

Now in her nineties, Ms. Paige paid tribute to late comedian Don Rickles after his passing in April 2017, "Each time a contemporary dies, a little part of me goes with them." In 1957, Janis had been hurt as the target of Rickles' sarcastic humor, "Unlike Frank Sinatra, who enjoyed Don's gutsy and one-of-a-kind routines, I just felt hurt and mad as hell." They later became friends. "A year later, I was starring in Las Vegas at The New Frontier Hotel. As I passed the casino, I saw Don. I decided that this was as good a time as any to tell him how I felt. And he couldn't have been sweeter or more apologetic."

A Star on the Hollywood Walk of Fame at 6624 Hollywood Blvd is dedicated honoring contributions to Motion Pictures by Janis Paige.