Tropical Cyclones, Typhoons, and Hurricanes are among the most powerful destructive forces in Nature

Choose your CD format
or order disks individually: Add to Cart Add to wishlist
Play a sample episode from March 05, 1950:

When European explorers followed Christopher Columbus to the Caribbean they encountered great storms that destroyed their ships like teacup being thrown against the rocks. The native peoples explained that these were caused by an evil spirit they called Hurakan. The earliest Europeans to sail the South China Sea learned of the "Supreme" or Devil Winds that the locals described as tai-fun. Hurricanes, Typhoons, and Tropical Cyclones are all examples of the same meteorological phenomenon and get their names from the region of the globe they occur. They are among the most powerful forces in nature. 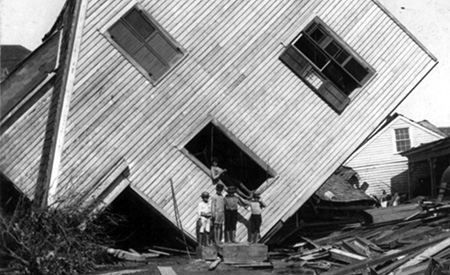 Hot spots form over the sea on the Southeast corners of the great Ocean Basins of the Northern Hemisphere (or the Northeast corners in the Southern Hemisphere). Above these hotspots, the atmospheric pressure begins to drop which helps the water on the surface of the ocean begin to evaporate. The low pressure also brings increasing winds which circle around the area; because of the rotation of the planet, the rotation is always counterclockwise in the Northern Hemisphere and clockwise in the South (tropical cyclones rarely form within five degrees north or south of the Equator).

The more the winds swirl, the lower the atmospheric pressure becomes, causing even greater evaporation rates. As the moisture in the air rises, it condenses at higher altitudes. The evaporation and condensation cycle feed more heat energy to the growing storm, causing the winds to swirl faster and more violently. The wind at the outer rim of the storm will eventually gain traction like a tire on a rain-soaked highway, and the storm will begin to move West.

During its westward migration, the cyclone will continue to feed on the heat of the sea, increasing the rate of the evaporation-condensation cycle and the swirling winds causing ever lower pressure at the center. Eventually, this low-pressure zone becomes a discernable "eye" in the middle of the cyclone where conditions are eerily calm.

As they travel over the hundreds of miles of open ocean, continually gaining strength and ferocity, the tropical cyclones also grow to terrific size. The greatest winds will be within a few miles of the storm's eye, but strong winds and torrential rains can be felt across hundreds of miles. 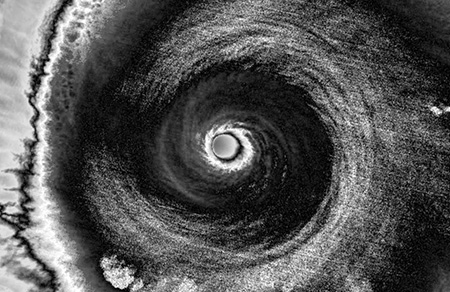 Even in this age of satellite technology, accurately predicting the path of a hurricane is an inexact science. The storm's path, while generally westward, can change at any time for unpredictable reasons. There are conditions which will allow the storm to begin weakening before it reaches a landmass. However, after its long oceanic journey, gathering strength the whole way, the hurricane could continue until it meets a continental coast before unleashing its fury.

The most frightening elements of a tropical cyclone are its winds which can gust to 150 miles per hour (a hurricane is defined by winds of 75 mph). However, the most dangerous part of the tropical cyclone is the water it carries. The constant evaporation-condensation cycle which has fueled the storm results in huge rain clouds which will dump torrential rains. Additionally, the massive winds will cause a huge surf with devastating waves crashing into the shore. Combined with a high tide, this combination may cause destructive flooding throughout a region.

Ann of the Airlanes, 1935, Episode #9, National Radio Programs Syndication, "Jack's Brother Tries to Help". Air Hostess Ann stows away on a transport plane bound for Africa, not realizing that the plane has been commandeered by dangerous diamond smugglers. Meanwhile, Ann's friends discover the smuggler's secret landing strip hidden under just a couple of inches of water in a false lake. 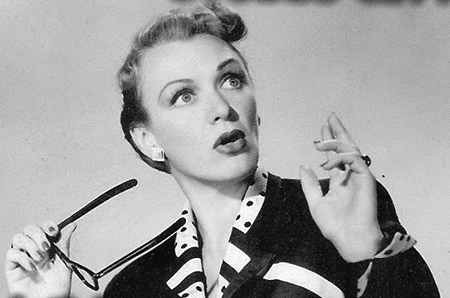 Our Miss Brooks, October 8, 1950, "Hurricane Warning". Walter Denton is giving Connie Brooks to school during a rainstorm, which means he had to take the roof of the car (it leaks!). Last night, Walter completed his shop project, a shortwave radio receiver. Connie is appointed as the temporary "acting" principal when she hears a report of an approaching hurricane over Walter's receiver. Amazing just how far away a shortwave radio can pull in a signal!

The Campbell Playhouse, November 5, 1939, "The Hurricane". Orson Welles plays Colonial Governor Eugene De Laage who is sent to govern the South Sea island of Manakoora. De Laage has a very Western sense of justice and has trouble winning the support of the natives. His mind is changed when a native sailor who was unjustly condemned predicts a once in a lifetime storm and saves the life of De Laage's wife, the administrator begins to relent. The story is based in The Hurricane (1937, Samuel Goldwyn Productions, directed by John Ford), one of Dorothy Lamour's "sarong" pictures.

Lux Radio Theatre, March 6, 1950, "Slattery's Hurricane". An unrecognized Navy Flying Hero from the War, Slattery, runs into his old War buddy who is still in the service, Lt "Hobby" Hobson, who is assigned to the Navy's Hurricane Chasing Service. The story opens with Slattery hijacking his civilian boss's plane to take over Hobby's mission to fly into a dangerous storm. Based on a story by Herman Wouk.