The Hoosier Hot Shots are considered the artistic forebears to Freddie Fischer and His Schnickelfritz Band, Spike Jones and His City Slickers.

"Everything I Do For Good" 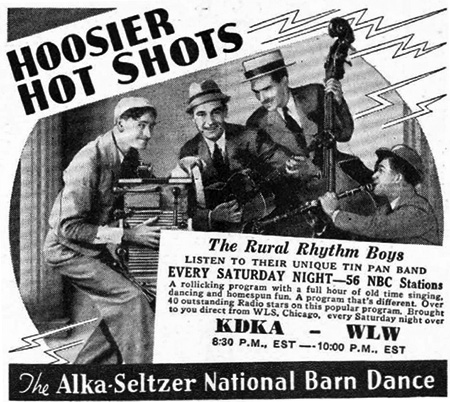 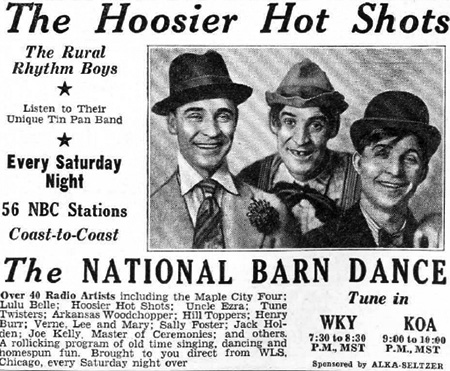 The thing is, no one is really sure where the term Hoosier comes from. Some scholars have traced the word to the term hoozer from Cumbrian language, meaning anything unusually large. Using Hoosier to refer to folks from Indiana became popular in the 1840s, but the word has been in print earlier than John Finley's 1833 poem "The Hoosier's Nest". In the Upland South, the word hoosier refers to someone from the backcountry or a yokel, when a backwoods cabin was approached, supposedly the residents would call out "Who's here?" or "Who's 'ere?" In such context, Hoosier is a derogatory term, but those from Indiana cling to it passionately.

The Trietsch brothers, Ken and Paul, were born on a farm near Arcadia, Indiana, 1903 and 1905, into a family of four brothers and five sisters. Their banjo-playing father imbued all the kids with an interest in music. Little Ken was just five when he was first able to get a melody out of a tuba which was bigger than he was. While the other kids were helping with farm chores, young Paul was tasked with helping his mother with the family laundry and discovered the musical potential of the washboard, making it his "Monday morning piana". As he grew older and assigned to tend the family milk cows, he found the cacophony of their bells (each tuned differently to identify the individual cow) to be a musical delight and attached several cowbells to his "Wabash Washboard", along with a number of squeeze-bulb bicycle horns in various octaves.

The Trietschs got their first taste of show business when the brothers donned outlandish costumes and performed with homemade instruments in a talent show in a nearby town. Flushed with success, Papa Trietsch agreed to accompany Ken and Paul on the vaudeville circuit, billed as "Hezekiah (Paul) and Rudy (Ken) Vaseline". When their father went back to farming, Ken and "Hezzie" continued to tour with Ezra Buzzington's Rube Band. The Rube Band broke up soon after the Wall Street Crash of 1929, but Ken, Hezzie, and clarinetist Gabe Ward of Knightstown, Indiana, were able to land a job with WOWO Fort Wayne. When the boys were nearly late for their on-air spot one morning, the worried WOWO station manager called "Hey you Hoosier Hotshots, get in here!" The name stuck. 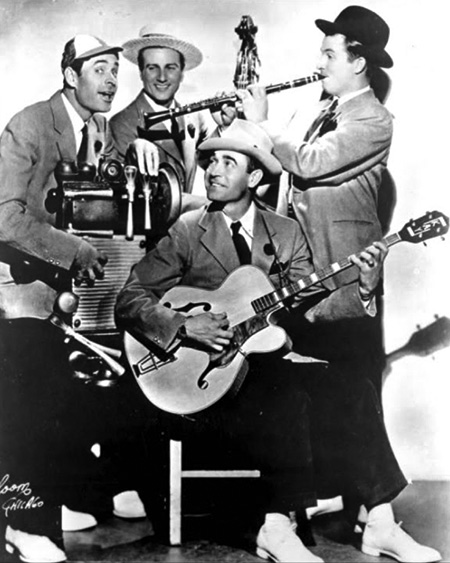 The Hoosier Hotshots became a quartet when they were joined by bassist Frank Kettering and were hired by WLS Chicago. They were given a five-minute show (sponsored by Alka-Seltzer) and made regular appearances on the WLS National Barn Dance. In addition to the "Wabash Washboard", Hezzie played intricate melodies on the slide whistle. All of the Hotshots were proficient with several instruments, to the point that their recording often sounded like barely contained chaos. Recordings (and their radio performances) often began with Ken calling: "Are you ready, Hezzie?" and they had hits with "I Like Bananas (Because They Have No Bones)", "From the Indies to the Andes in His Undies", "The Beer Barrel Polka", "When There Are Tears In the Eyes of a Potato", and "She Broke My Heart in Three Places".

Personnel shuffles came when Kettering was drafted in 1944. The Hoosier Hot Shots made a USO camp show tour through North Africa and Italy, and the band was honored when playing for a blood drive at the Douglas Aircraft Factory in Long Beach, California, when the management announced that a newly manufactured bomber was to be christened "The Hoosier Hot Shot" (sadly, the B-17 assigned to the 324th Bomb Squadron of 91st Bomb Group was shot down by German fighters on April 19, 1944).

The Mutual Network put the Hot Shots on the air during the 1949-50 season. Although they began to lose popularity in the late 1950s, they continued to perform as the Hoosier Hot Shots until Hezzie Trietsch passed away in 1980. They lost Frank Kettering in 1973, and Ken passed in 1987. Gabe Ward continued to play until just before his own death in 1992. The Hoosier Hot Shots are considered the artistic forebears to Freddie Fischer and His Schnickelfritz Band, Spike Jones and His City Slickers, and Weird Al Yankovic.