The series makes for a grand introduction to classical symphonic music at the Hollywood Bowl - selections include the opera Carmen sung in English, featured soloists Isaac Stern, Dorothy Eustis, Roman Totenberg, and Percy Grainger, with selections from Brahms, Tchaikovsky, Mozart, Rachmaninoff, and Cellini.

Choose your CD format
or order disks individually: Add to Cart Add to wishlist
Play a sample episode from July 04, 1946: 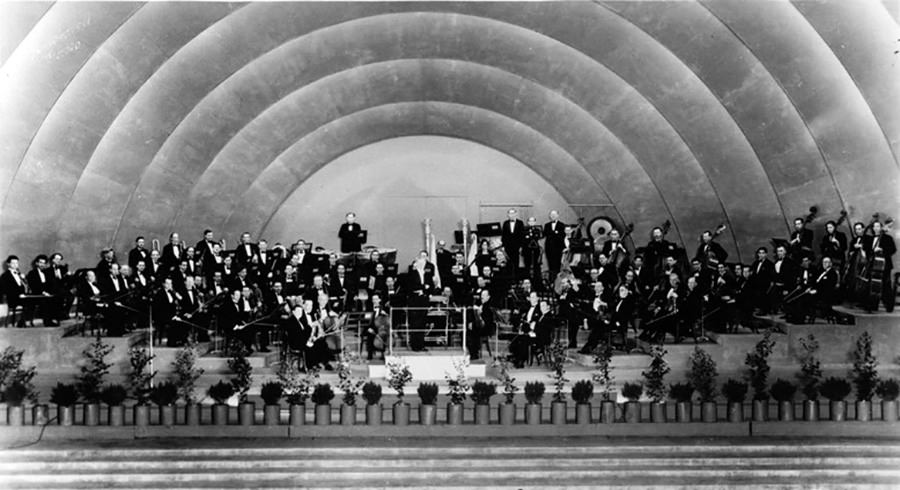 Because so many movies, TV shows, radio programs, and other such fantasies come out of Hollywood, it is easy to forget that it is a physical place with its own local icons and landmarks. Many of them have become a part of international culture thanks to their exposure in the movies, including the Hollywood (formerly Hollywoodland) sign, Grauman's Chinese Theatre, The Hollywood Walk of Fame, the Capitol Records Tower, and the Hollywood Bowl.

Most of these landmarks are considered "must-sees" for tourists visiting "Tinsel Town" for the first time. They have been seen so many times, who wouldn't want a snapshot of themselves standing next to them to show the folks back home. The Hollywood Bowl is a possible exception since the venue is one more enjoyed by locals rather than tourists. However, as we have pointed out, the culture of Hollywood has become the culture of the world.

The Hollywood Bowl is a natural amphitheater which has been adapted for live musical performances. The film industry began in Hollywood in 1910, and by the end of the decade show business was so important to the central Los Angeles neighborhood that the Theatre Arts Alliance was formed. In 1919, the Alliance sent two of its members, William Reed and his son, H. Ellis Reed, on a mission to find a suitable location for outdoor musical performances. The went to a local picnic spot known as Daisy Dell in Bolton Canyon. While William rested near a live oak tree near the center of the bowl-shaped area, his son crossed a barbed-wire fence to climb a hill. When he shouted back to his father and they were able to carry on a very clear conversation, they realized that Daisy Dell had naturally perfect acoustics. 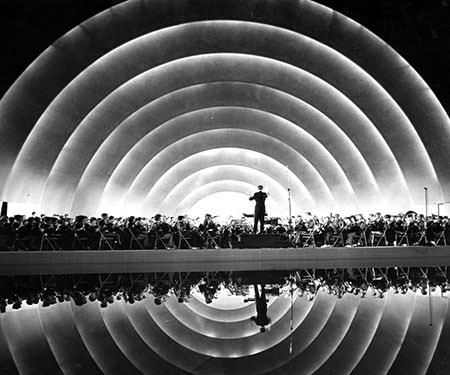 One of the earliest known performances in the Bowl took place on a makeshift stage constructed of a barndoor laid on the ground, with the audience sitting on wooden benches placed on the surrounding hills. On March 27, 1921, the Los Angeles Philharmonic Orchestra performed an Easter sunrise service which was attended by 800 patrons. The Philharmonic began their first full summer program in the Bowl the following year. The first band shell was erected in the Bowl for the 1926 season when Allied Architects were contracted to regrade the Bowl and provide permanent seating. The shell was considered "acoustically unsatisfactory" and featuring murals if sailing ships, decidedly unfashionable.

In 1927, Lloyd Wright (son of Frank Lloyd Wright) constructed a band shell (possibly using wood recovered from the set of Douglas Fairbank's Robin Hood). Although it was acoustically superior to the previous shell, its vaguely pyramidal appearance was disliked. Wright was given another chance the following season, with the provision that arches be incorporated in the design. Wright designed the elliptically arched shell to be dismantled during the off-season, and it was considered the most acoustically perfect shell to have been used on the site. Unfortunately, funds to dismantle and store the shell were not provided, and weather damage over the winter rendered it unusable.

A permanent band shell was built in 1929, but since it used circular arches rather than the ellipsis designed by Wright, it was considered acoustically inferior and necessitated greater use of electronic amplification. The coating of the shell deteriorated over the years, further degrading the sound. However, it remained a popular venue for concerts. Frank Sinatra became to first popular act to headline the Bowl in 1946.

Leopold Stokowski organized the Hollywood Bowl Symphony Orchestra in 1945, drawing on talent from the Los Angeles Philharmonic and from various film studios. The 1946 season was celebrated as the Bowl's Silver Jubilee. The Armed Forces Radio Service was allowed to record all thirty-two concerts that season for broadcast overseas, and those recordings comprise this collection. Most of the performances are conducted by Stokowski, although guest conductors appear for some.