Building on a tradition of vocal harmonies and syncopated rhythms, The Golden Gate Quartet not only popularized Gospel music but helped lay the foundations of Rock and Roll.

Jazz is called the American Art Form, but jazz influences are regional. To many, the purest form of jazz is the Dixieland sound which had its genesis with the brass bands formed by inner-city blacks in New Orleans using instruments abandoned by military units on the New Orleans docks at the end of the Spanish American War. The Delta Blues arose as Dixieland came up the river and fused with Scott Joplin's Ragtime, the mournful sounds of downtrodden black field workers, and the slide guitar of Nashville Bluegrass and country gospel. When the Blues reached Chicago, they developed a rye-soaked nightclub quality and Chicago Blues moved East to Harlem where it became polished and even commercial. 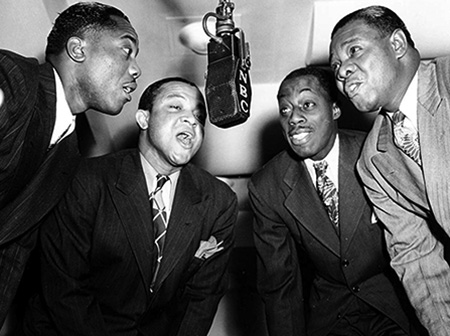 Another musical tradition arose in the working-class neighborhoods of larger American cities, practiced by young men who received their first musical training at their neighborhood churches and then took their sound to the front stoops and staircases of the town. These youngsters, from black households but also the sons of Italian and Puerto Rican immigrants, usually did not have access to instruments but would listen to the radio in addition to the vocal training at their churches. They learned to imitate the sounds of a Jazz Quartet using just their voices. When these groups, especially the black ones, sang religious and spiritual songs, their style became known as Jubilee Music. In the late Forties, especially as more white groups became popular, the sound was called Doo-Wop.

Four friends who attended Booker T. Washington High School in Norfolk, Virginia, began singing together in 1935 as The Golden Gate Jubilee Singers (not only did they predate the term Doo-Wop, when they began singing together San Francisco still did not have a bridge named for the group). Willie Johnson took the baritone parts, William Langford and Henry Owens handled tenor and second tenor duties, and the group was anchored by Orlandus Williams' bass.

The 'Gates became popular for local church services and on local Norfolk radio. Their early stylings were closer to Barbershop harmonies, but they soon began employing Jazz elements like syncopated rhythms and scat singing. The landed a regular spot on WIS Columbia, South Carolina, and further expanded their sound by using their voices to imitate instruments; Williams's "boom-boom" bottom replaced the string bass and the tenor's occasion "shang-a-langs" hit the guitar parts. Any of the parts might belt out a "dooo -wop -wop" brass riff. 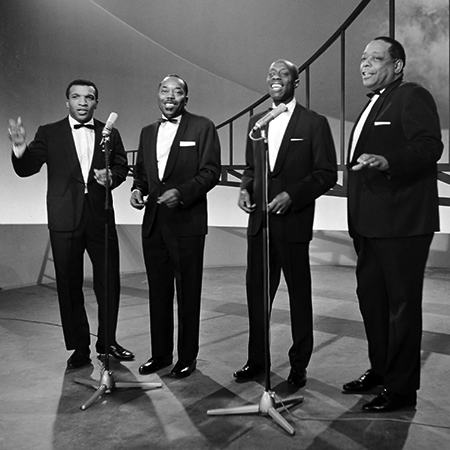 A contract with Bluebird Records and a regular spot on WBT Charlotte, North Carolina in 1937 were signs that the 'Gates were headed for the big time. The appeared at Carnegie Hall in 1938 with John Hammond's From Spirituals to Swing review. They remained in New York City, becoming the house act at the Café Society nightclub. In 1940, the group signed with Columbia's Okeh Records and changed their name to The Golden Gate Quartet. They began the syndicated radio program included in this collection and were invited to perform at FDR's 1941 inauguration (becoming the first black act to perform at Constitution Hall), and Eleanor Roosevelt would invite them to the White House on several occasions.

As it would with many other acts, the War took a toll on the Golden Gate Quartet. Johnson and Wilson were drafted into the Navy. The group reformed after the War but had been supplanted by other "hard gospel" groups like The Dixie Hummingbirds and The Soul Stirrers. A slightly reformed Golden Gate Quartet toured Europe in 1955 to popular success. While performing in Paris in 1959, the group was visited backstage by an American Soldier on furlough from his unit in Germany, Cpl Elvis Presley. Elvis had been a fan of the Golden Gate Quartet since childhood, and when he met up with them in Paris he not only remained for the show, he moved into their hotel to sing with them.

Although the lineup has changed over the years, the Golden Gate Quartet is still active.