The show is fast moving and highly entertaining, moving from ensemble numbers to monologues to duets to sketches to solos and back to the ensemble.

Choose your CD format
or order disks individually: Add to Cart Add to wishlist
Play a sample episode from September 29, 1940:

Broadcasting, and to a lesser extend cinema, democratized entertainment. Suddenly, it no longer mattered if you were a factory worker, a clerk, or a high-end financier, what you were laughing at was the same thing everyone else was laughing at. This was not always the case in the class-stratified world of the Edwardian period.

Vaudeville was the entertainment venue for the masses, and it developed its share of traditions. Most of the performers in vaudeville were working class folks struggling to make a living, just like their audience. Showmanship and originality were the highest virtues, but there was a limit to what a vaudevillian could "get away with". They were restrained by the middle-class mores of the audience. 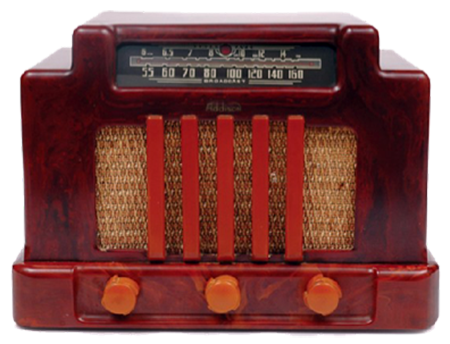 The aristocratic upper classes would not be caught dead in a vaudeville house, rather, the entertainment venue for the rich and nouveau riche was the Revue. Taken from the French term "review" for magazine, like vaudeville variety programs a revue attempted to give their audience a little bit of everything. Like the cable networks several decades later when cable began taking over from broadcast television because the patrons were willing to pay a little more for their entertainment, the performers could "get away" with a slightly more ribald presentation.

Unlike melodrama, operetta, or musical theater, revues did not have an overarching plot they needed to stick to, but they were usually built around a central theme. This meant that there was not a great deal of character development, and the audience would depend upon stock types to figure out who was who. It also gave the opportunity for a good deal of "doubling"; an actress playing an ingénue might reappear later in the program as a vamp, or the blow-hard tycoon in the opening scene night be a farm-boy by the curtain call.

Revues reached their pinnacle on Broadway between WWI and the Great Depression. They included Florenz Ziegfeld's Follies, George White's Scandals, and productions by the Shubert Brothers and Earl Carroll. Patrons might pay $5 for a revue ticket at a time when a decent seat in a vaudeville palace went for a dime or fifteen cents. It is easy to understand why vaudevillians dreamed of moving up to "the big time" of Broadway revues.

Of course, rather than revues, many of our best-remembered vaudevillians found even greater success in radio. In 1940, NBC began an experiment bringing the review format to the airwaves. Fun With the Revuers featured fast-moving entertainment written and performed by five young people and backed up by the Irving Miller Orchestra. The Revuers wrote original music and lyrics for each week's performance and featured themes like Magazines, Inventions, Nightlife, the World's Fair, and Music.

The show is fast moving and highly entertaining, moving from ensemble numbers to monologs to duets to sketches to solos and back to the ensemble. The pace requires some effort on the part of the listener to keep up, but it can be even more enjoyable than trying to stay ahead of the clues found by a soft-boiled detective. Most of all, Fun With the Revuers is fun for everybody!