The Love Story of Dick and Jeanie

Produced with just a boy, a girl, an organist and starring "canteen girl" Phyllis Creore as Jeannie was a small town girl who came to the big city to be a singer.

"Dick and Jeannie Introduce Themselves"

One of the really fascinating things about Old Time Radio is how much it might take to create some great entertainment. A high-priced variety program needed a big-name host, a few regular sidekicks, an orchestra, popular and exciting guests, and a highly creative writer and director to pull it all together. A detective show started with a great writer to create a compelling story, a gritty and handsome-sounding star to sell it, a cast of several for support, and possibly a studio orchestra on broadcast night to help set the mood. Even a straight musical program needs plenty of studio space for different acts and some on-the-ball technicians to set up the microphones to catch everything.

At the other end of the spectrum are shows like Dick and Jeannie which only needed a boy, a girl, an organist, and a writer to send them in the proper direction. The writer, in this case, was the prolific Margaret E. Sanger. Named for her grandmother who had been a prolific poet, her father had been a newspaper editor in New York City. Margaret was a correspondent for The Christian Herald magazine during WWI, spent time editing for the magazine and other publications, and wrote scripts for ABC for many years. The boy was a crooner named Roy Williams and the girl was Phyllis Creore known for her work as a "canteen girl" during the War. 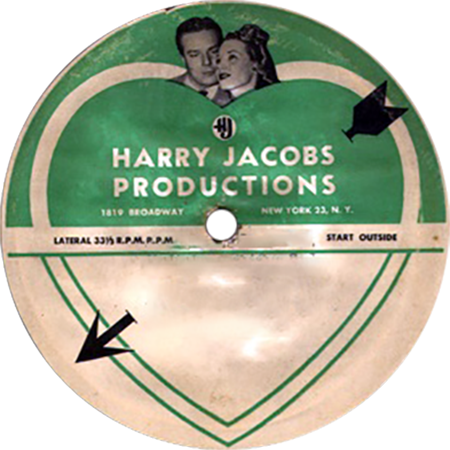 Phyllis moved to the big city from her small hometown of Rochester, New York, in 1937, and settled into The Rehearsal Club, a boarding house shared by about 40 other girls trying to make it in show business. During the 1939 New York World's Fair, Phyllis worked as Miss Television, smiling and touting the new technology for fair goers. She was one of the few residents awake at The Rehearsal Club when she tuned in the house radio one early morning near the end of 1941 and was the first of her housemates to hear of the Bombing of Pearl Harbor. A notice soon appeared on the House bulletin board looking for volunteers for the Stagedoor Canteen. Although the lesser known girls did not work as hard at the Canteen and the big stars who cooked, cleaned, and waited tables for the visiting servicemen, they were always on hand to make sure the G.I.s got to dance with a pretty girl before shipping out.

Inspired by her experiences at the Canteen, Phyllis put together a script for a one-girl-show and through some contacts persuaded NBC to run with the idea. For 15 minutes every Friday, she went out over shortwave broadcast as The Canteen Girl. The show included Phyllis just talking to the boys, singing a few songs, and eventually reading some of the letters G.I.s would send in. Phyllis also kept many of the letters in leather-bound scrapbooks.

Dick and Jeannie was transcribed and syndicated Harry Jacobs Productions in 1947. Jeannie was a small town girl who came to the big city to be a singer and wound up as a tour guide in a big studio resembling Radio City. Dick had dreams of being a singer on the radio, but could only find a job as an elevator operator network headquarters building. One day Dick hears Jeannie singing in an unused rehearsal hall and joins her in a duet. Naturally, they fall in love, even though between them they barely make enough money to pay attention.

At five minutes per episode, which included music for a local sponsor's voice over and at least one duet by the couple, the story on Dick and Jeannie moved slowly, especially when you consider that the actors and organist probably cut as many as a dozen episodes in an afternoon. As slow as it is, the notion of being young and in love is savored and makes it worth drawing out.