Mankind's oldest fear is the darkness of night and the things that go bump therein!

Choose your CD format
or order disks individually: Add to Cart Add to wishlist
Play a sample episode from March 27, 1948:

The human-animal is designed to work in the light of day. As primitive hunter/gatherers, our superior eyesight and color perception allowed our ancestors to take aim with basic missile weapons, spot prey at a distance, and determine which plants and berries were safe to eat. Those advantages disappeared when the sun went down. 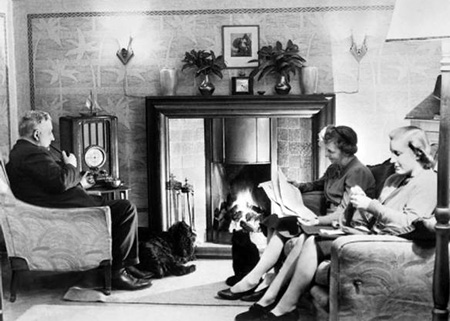 As the darkness settled over the land, an ancient man gathered around the safety of the fire, a force that he had tamed not only to cook his food but as a means to drive back the dangers of the night. In time, candles, oil lamps, and gas lights were invented to help penetrate the darkness. The electric light seems to have finally conquered the darkness, but even this marvelous invention has its limits.

The American Special Forces take undeniable pride in being able to operate in the nighttime environment thanks to the latest electronic night-vision technology. We can only imagine the fears of an insurgent enemy who realizes that out there in the darkness is a Navy SEAL of a Green Beret who he cannot see but the Operator can see him.

Nighttime is not the only darkness that man has to face. For generations, miners have ventured underground where daylight never penetrates. The earliest underground explorers must have carried fire with them, but, what happens when…

And many more tales of the dim and dark are included in this requested collection!  See also: Winter Chills Horror Mystery and Intrigue