He authored the book "How to Win Friends and Influence People" which is among the most influential books of all time. 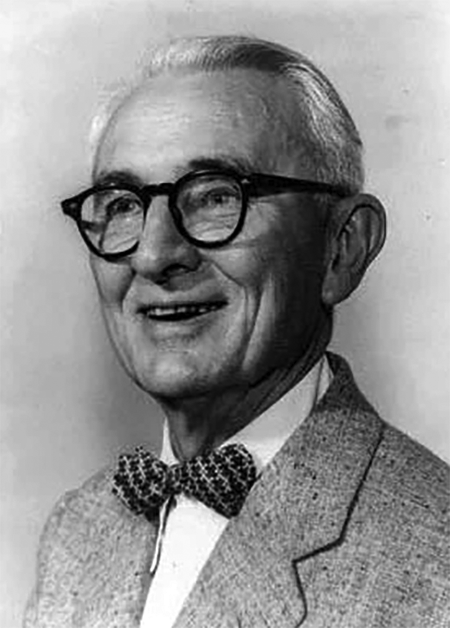 The Self-Help industry is a multi-billion dollar industry annually. This flies in the face of the fact that many consider "Self-Help" to simply be a new outlet for snake oil peddlers (if you pay someone to help you are not doing it yourself and if you don't need someone else, then you don't need help!)

Although there is a good deal of cynicism surrounding the Self-Help movement, the movement has its roots in a genuine desire to help people improve their lives. The Chautauqua Movement, which has its roots in the Methodist Sunday schools of upstate New York would eventually bring culture and entertainment to the rural Midwest and lead to the creation of one of the earliest and most successful self-help books, How to Win Friends and Influence People (1936, Simon and Schuster) by Dale Carnegie.

Carnegie was born in Missouri, 1888, to a poor farming family. His early education took place in one-room schoolhouses until the age of sixteen when his family moved to a farm near Warrensburg, Missouri, and Dale was able to attend high school. He had to get up at 3 am to milk the cows but otherwise seemed to enjoy school. Carnegie was not able to distinguish himself through sports but soon discovered that he was able to make friends and earn respect using his words.

One of Dale's favorite things in these years was attending the Chautauqua tent meetings that came to town in the summers. The shows included music and some religious instruction as well as lectures on various topics. Determined to become one of those lecturers, after High School Carnegie enrolled in the local State Teacher's College. Unable to afford a room, he rode a horse to the campus each day and took advantage of the long rides to practice his oratory skills.

After graduating from college in 1908, Carnegie worked as a traveling salesman peddling correspondence educational courses to farmers, and later worked for the Armour Company. When he had saved enough money, Carnegie enrolled in the American Academy of Dramatic Arts in New York but found the actor's life dissatisfying. However, he was such an effective public speaker that other students at the AADA hired him to coach their public speaking efforts. 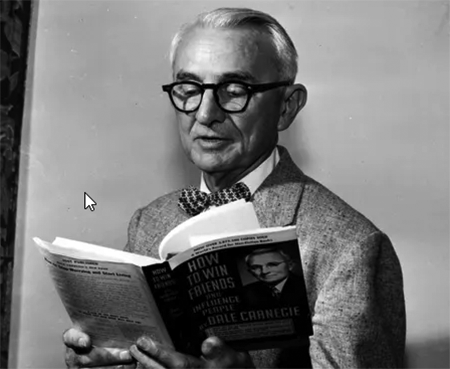 While living at the 125th Ave YMCA, Carnegie had the idea to offer public speaking lessons to the public. For a portion of the profits, the manager of the YMCA allowed him to use a hall in 1912 and the Dale Carnegie Courses were born. He tapped into the growing need for executive-level workers to exude more confidence and by 1914 he was earning $500 each week.

Carnegie was listed as a Conscientious Objector during the Great War, although he did work for the Army at Ft Upton. After the War, Carnegie was tapped to work as business manager for a lecture tour conducted by correspondent Lowell Thomas covering his experiences with Lawrence of Arabia. After the tour, Carnegie went back to teaching public speaking, which had become a vital skill for salesmen in the fast-moving post-War boom times.

Leon Shimkin, an executive at the Simon and Schuster publishing company enrolled in one of Carnegie's 14-week courses on human relations and public speaking. The executive was so impressed with the course that he convinced Carnegie to allow a stenographer to take notes on the course and those notes were developed into the How to Win Friends book.

How to Win Friends and Influence People was sold through 17 editions in its first year of publication and remains popular today. The anecdotes and language have been slightly updated for modern readers.