This fifteen syndicated minutes of music has one thought in mind: "Get down to your Chevy Dealer Today!"

Choose your CD format
or order disks individually: Add to Cart Add to wishlist
Play a sample episode from August 25, 1938: 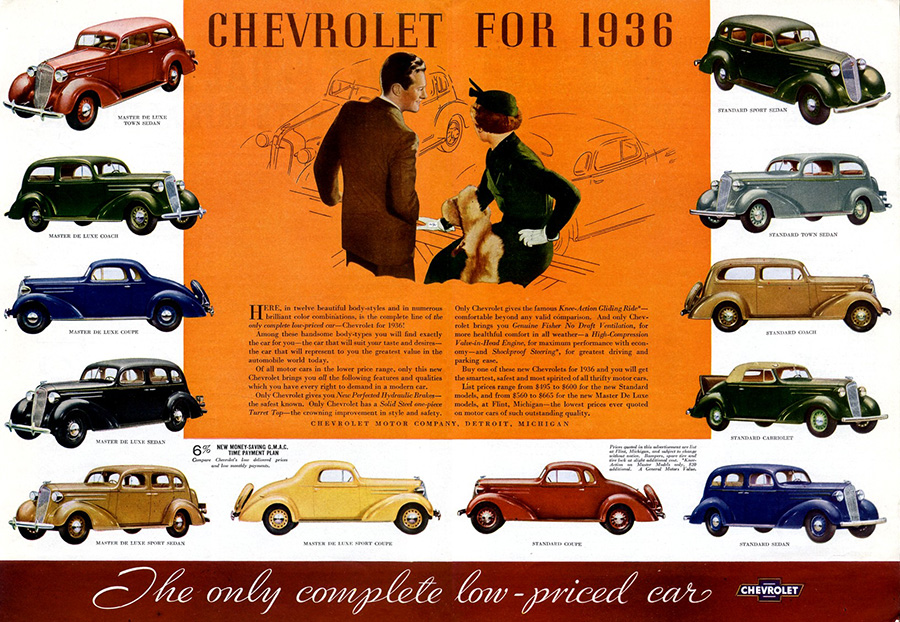 When President Eisenhower signed the Federal Aid Highway Act of 1956, the people finally had the chance to "See the U.S.A., in your Chevrolet". We knew that was what we wanted to do, of course, because Dinah Shore sang to us about it every week. That catchy tune may not have sold a lot of cars on its own, but it certainly helped drive folks into Chevy dealerships.

Of course, it was not the first time Chevrolet used music to attract car buyers. In the 1930's Chevrolet dealers could by syndicated episodes of Musical Moments to broadcast in their local market area. This underscores one of the biggest differences between Chevy and their rival, Ford -- marketing.

The myth of Henry Ford putting America on wheels is not without merit. The Model T was a robust, technically simple, and reliable car that Americans needed. Bill Durant at General Motors knew that there was more profit to be made selling Americans the cars they wanted.

William Durant was born in Boston in 1861. He would drop out of high school and go to work at his grandfather's lumberyard in Michigan. Soon, he decided to find more profitable work and became a cigar salesman before moving into carriage sales and manufacture. Durant was hardly a fan of the new horseless carriages, recognizing how dangerous the new technology could be. However, he realized there was money to be made by coming up with a safer automobile so he invested in the then deeply indebted Buick Motor Company, 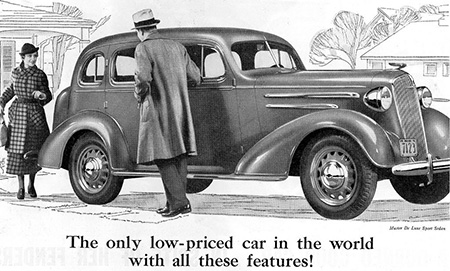 Using his knowledge and business sense gained building carriages, Durant quickly turned Buick around. By the 1905 New York Automobile Show, Buick was selling more cars than Cadillac, Oldsmobile, and the Ford Motor Company. Working with a few wealthy partners, in 1907 Durant opened an escrow account which would be the basis of the General Motors Holding Company. They consolidated 13 car manufacturers and ten parts companies, including Cadillac, Oldsmobile, and Pontiac. The acquisitions left GM short of cash and Durant was forced out of the company in 1910.

Not about to give up, Durant invested in an automobile company developed by race car driver Louis Chevrolet. The driver (who had raced for the Buick team and learned design from the factory's engineers) was more interested in sportier cars and split with Durant to form another car company. Durant was able to grow Chevrolet to the point that he was able to purchase GM and make Chevy its flagship line.

Henry Ford and Durant share their vision of automobiles become a mass-market item, but their approaches differed. Ford's Model T was inexpensive because it was designed to take advantage of assembly line manufacturing efficiencies. The joke that you could have a Model T in "any color you like, as long as it's black" was true because black paint dried fastest on the assembly line. There was little to distinguish a Model T built in 1910 and a 1920 model, any changes were made to increase manufacturing efficiency; there was no reason to buy a new one until the car was simply worn out. 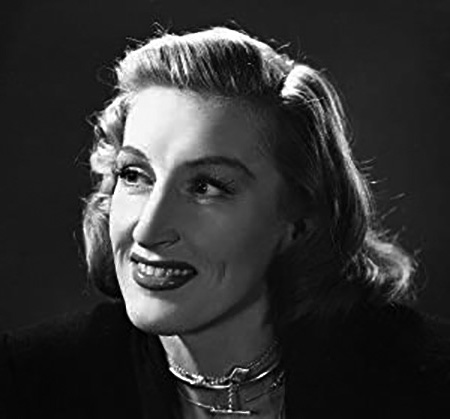 The GM philosophy with its multiple brands was to appeal to different class buyers. A young family starting out could probably afford a new Chevrolet. In a few years, after working hard and saving, they could move up to a Buick, then an Oldsmobile, and finally they would join the truly wealthy and drive a shiny new Cadillac. Significant styling changes were made from one model year to the next, and creative financing options from the General Motors corporation made it possible for an average joe to afford a new car, even if the old one hadn't worn out. Oh yeah, Chevrolets came in several different colors.

Ford finally bowed to competition from Chevy and began producing the Model A in 1927, after GM had topped Ford sales in 1925. While the Ford factory was closed for six months to retool for the Model A, Chevrolet exceeded Ford sales. The Model A, however, was a beautiful car that was twice as powerful as the Model T and could be had in four different colors (black was not one of them).

Chevy and Ford would swap the top sales spot several times before WWII. Brand loyalty became rampant with Ford owners stating that a Chevrolet was the nicest car to ever be pushed while Chevy fan knew that Ford stood for "Fix Or Repair Daily". Chevy featured an overhead-valve inline six-cylinder engine, which was obviously "two better" than Ford's four-cylinder power plant. Ford countered with the Flathead V-8 once the engineers discovered a way to cast the entire engine block in a single step. The most important difference between the two companies remained the way their cars were marketed.

Musical Moments was produced by the World Transcription Service in 1935 and 1936, and local Chevrolet dealers could pay (or, possibly were required to pay) for them to be played over their local stations. Music was provided by David Rubinoff and his Orchestra, who were veterans of The Chase and Sanborn Hour and Rubinoff had his own program on NBC during the same period as the Musical Moments broadcasts (Rubinoff's $100,000 Stradivarius violin was nearly as famous as he was). Announcing duties and the description of the latest Chevy models were handled by Hugh Conrad or Graham McNamee.

Fifteen minutes of music might not have been enough to get you to by a 1936 Chevy for Christmas, but it certainly could have put the notion in your brain!