Choose your CD format
or order disks individually: Add to Cart Add to wishlist
Play a sample episode from July 30, 1960:

More than a millennia and a half ago, during the Golden Age of India, a handsome prince led his army on the field. Alas, his enemies outmaneuvered the prince and he was killed in the battle. It fell to his older brother, who was also at the battle, to explain to their grieving mother how her darling son was lost. To help her understand, the elder prince took some pieces from a board game and moved them to demonstrate how the younger prince was defeated. 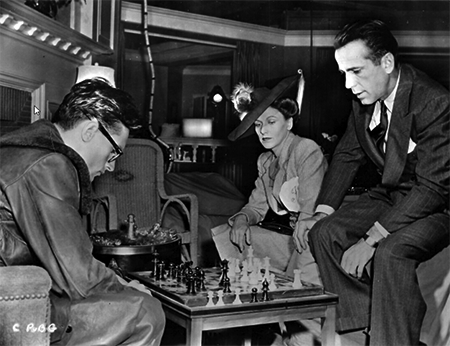 This is just one f several mythical origins of the game of Chess. Chaturanga, which means the four divisions of the army, was played in the seventh century. The four divisions were the infantry, the cavalry, the elephantry, and the charioteers. These would evolve into pawns, knights, bishops, and rooks, all of whom were meant to protect the King.

The game spread from India to Persia, where the rule was added that a player must declare "shah mat" (Checkmate) when that piece was captured. Traders along the Silk Road brought the pastime to Muslim Arabia. The Arabs changed the pieces to abstract figures because the Koran discouraged carven idols. Chess eventually came to the court of Charlemagne, the Holy Roman Emperor.

The European form of Chess is now accepted as nearly universal, although the names of some of the pieces have local derivations. For example, the bishop on English boards is known as the fool in France. Chess is considered more than a game or a means to develop strategic thinking. It is seen as a test of intellect as well as an exercise in creativity.

The chessboard was even a battlefield of the Cold War. Russian players dominated international Chess competitions for most of the Twentieth Century, however, in 1997 Russian Grand Master Gary Kasparov was defeated by an IBM chess computer named Deep Blue.