The Casebook of Gregory Hood

Beginning as a replacement of The New Adventures of Sherlock Holme, The Casebook of Gregory Hood developed into an original crime drama in its own right

Choose your CD format
or order disks individually: Add to Cart Add to wishlist
Play a sample episode from July 15, 1946:

"South Of The Border" It all started because Sherlock Holmes was in trouble.  The trouble came not from an expected source like Professor Moriarty, Irene Adler, sniper Sebastian Moran, or "the Napoleon of Blackmail" Charles August Milverton. The Great Detective's troubles all arose on Radio Row, some of them would make sense, others defy explanation, but in the end, it would play in the favor of Gregory Hood. 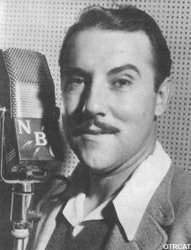 Between 1939 and 1946, Basil Rathbone had played the detective in fourteen films of various quality. During the same period, he had appeared in The New Adventures of Sherlock Holmes with his movie costar, Nigel Bruce playing Dr. Watson. For the first few seasons, they pitched Bromo Quinine on the Blue Network but in the spring of 1943, the program was retooled for Petri Wines on Mutual. Things began to fall apart about the time New Adventures was preparing for the 1946 summer break.

After playing the part for so many years, Rathbone was (justifiably) beginning to fear that his reputation as a well-rounded actor would be superseded by typecasting. He not only cut ties from the film parts, but he left the radio program as well. Whether this was due to financial considerations, objections to the way New Adventures was using the Consulting Detective, or simply upset over the loss of Rathbone is not known (the show moved over to ABC Radio starring Tom Conway and Nigel Bruce with new sponsorship).

Preparations were already underway for New Adventures' summer replacement, which would use most of the show's production company, including Announcer Harry Bartell, Dean Fosler handling the music, and most importantly, Anthony Boucher and Denis Green writing. Boucher and Green invented the character of a Gentleman Detective Gregory Hood and veteran radio actor Gale Gordon was brought onboard to bring Hood to life. 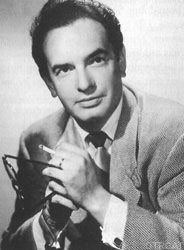 "Gentleman Detective" usually refers to a character who solves crimes even though his normal job has nothing to do with police work or crime-fighting. Gregory Hood was a buyer and seller of rare artworks and antiquities. This would have brought him into contact with plenty of nefarious underworld types, but Hood was also a bit of a "super-man" much Holmes had been before him. Based out of San Francisco's Nob Hill, Hood was a genius piano player and composer, a self-taught forensics expert, master of ancient and modern weapons and fighting systems, a gourmet, and a dedicated wine snob who maintained an extensive cellar. His Nob Hill headquarters apartment was managed by his Chinese valet, Fong.

The format for The Casebook of Gregory Hood was only slightly modified from that of New Adventures. The show would open with Announcer Bartell being invited to enjoy a refreshing glass of Petri Wine while Hood or his sidekick and attorney, Sanderson "Sandy" Taylor related this week's story.

Casting Gale Gordon to play Hood was an inspired choice, and one of the actor's few opportunities to move out of a supporting role (the last time being on the kiddie serial The Amazing Interplanetary Adventures of Flash Gordon in 1935). Gordon appeared as Hood on the last episode of New Adventures on May 27, 1946, the next day his regular as "Mayor La Trivia" made its last broadcast before going on summer break. The Casebook of Gregory Hood debuted on June 3, 1946, and probably earned Gordon a decent summer paycheck. When the summer season ended, however, Gordon was unwilling to commit to further Hood episodes and the role went to "Mr. Radio", Elliott Lewis.

The fall season began on September 30, 1946, and although he had several other projects going, Lewis stayed with the part until the end of the 1947 spring season. The show transferred to ABC, where it was sustained by the Network off and on until 1950.