This collection includes appearances by the blonde bombshell and comedian on The Pepsodent Show (Bob Hope), It's Time To Smile, The Charlie McCarthy Show, Radio Hall of Fame, and Radio Hall of Fame showcasing Hutton's singing and acting and all-around compelling personality.

Choose your CD format
or order disks individually: Add to Cart Add to wishlist
Play a sample episode from November 13, 1943: Actresses, singers, dancers: we call these people entertainers.  They are celebrities and artists, influencers of public taste, but first and foremost they are there to entertain, to make us happy. 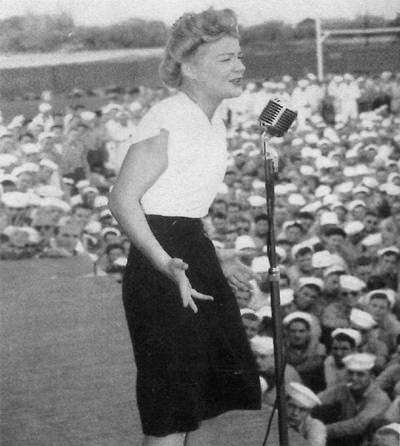 It's an odd exchange, flipping on a television or a radio to be brought joy by a complete stranger, someone who will never meet us but who imagines us among the vast audience she is trying to entertain.  Why do we turn to these strangers?  Maybe it's just because they have a knack for making us smile, for making our day less drab.

Betty Hutton, vivacious, sexy, brassy, could light up a collective consciousness even if she herself led a rough and dark life.

Betty grew up in a broken home in Michigan, singing in a speakeasy at the age when most kids are learning the alphabet. She and her sister had to hit the road and live a vagabond's life with their mother, who was often in trouble with the law.

Later in life, looking back, Hutton said, candidly, "My marriages have not been happy, my children didn't bring me happiness, nothing has brought me true happiness until I discovered Catholicism."  She referred to a conversion that took place at mid-life after she'd left show business.  Elaborating on her marriages, she commented, "My husbands all fell in love with Betty Hutton.  None of them fell in love with me."

Perhaps bringing joy to others is an attempt to find it ourselves. Command Performance took as its explicit mission the entertaining of others.  The show went out to the WWII troops and took requests from them.  A lot of them wanted to hear the blonde with the booming voice, Betty Hutton.  She took the mic on the show several times, belting out her top hits in a voice that couldn't have been more perfect were soldiers.  She had a bit of the tomboy in her sound--no silk or satin, the anti-lounge singer.  Her words slammed out with attitude.

On the show, she entertained with "Murder, He says," and other popular numbers.  She co-starred in episodes with the likes of Dorothy Lamour, Bob Burns, Judy Garland, Rita Hayworth, and Freeman and Gosden, the voices of Amos 'n Andy.

Also lucky enough to have Ms. Hutton were The Pepsodent Show (Bob Hope), It's Time To Smile, The Charlie McCarthy Show, and Radio Hall of Fame.

She also starred on an episode of Hedda Hopper's Hollywood with two memorable songs, including a rare ballad.  She also plugged her movie, "Let's Dance."