This extensive collection has some great classic baseball recordings in radio history!

An interesting aspect of sports, and Baseball in particular, is that even after the contest is over, it can be relived and discussed for years. In some ways this lends excitement to the current season; many of the rivalries that make the game so entertaining go back to games played by men who went to the Dugout in the Sky years ago. Many of these old games have enough drama to be entertaining in their own right. 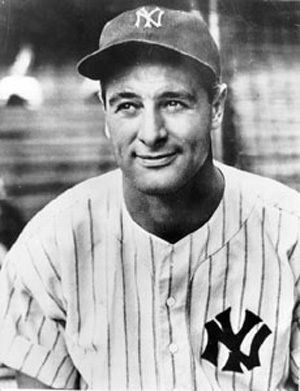 This collection begins with the Sept 20, 1934 game between the NY Yankees at Detroit. This is the second game of a late season, two game series. Although the Tigers are leading in the American League Pennant Race (which they would win back to back beginning in 1934) the Yankees are not about to lie down and let Detroit take it all without a fight. And there are other dramas unfolding in the game. Charlie Gehringer of Detroit and the Yankee's Lou Gehrig are hitting in the .350s and slugging for the AL Batting title. Despite their back to back losses, the Tigers only need to win four games to clinch the pennant (which they will do in the second half of a double header against the White Sox on the 26th). Significant to our interests, this game is the earliest known full recording of a Major League game.

Short of going to the ball park, many fans prefer to "watch" the ball games on the radio. This 1934 Yankees-Tigers game is fun to listen to in order to hear the back-ground; the crowd noises, the press typewriters and ticker-tape machine, and announcer Ty Tyson not only calling the game for the radio, but operating the ballpark Public Address system as well.

Although they won the Pennant in 1934, the World Series that year would not be as joyful for the Tigers, as they went up against the "Gas House Gang" of the St. Louis Cardinals. The Cards were known for their Blue Collar ethic; playing hard with a seeming lack of discipline, drinking hard and showing up to the ballpark in dirty uniforms. The Redbirds were led by the Dean boys, Dizzy and Paul. The Series would go a full seven games, with the Dean boys each getting two of the Cardinal's wins. Dizzy was almost taken out of the series early. He was put in as a pinch runner in Game 4, and he broke up a double play by blocking the relay throw- with his head! Dizzy was rushed, unconscious, to the hospital, but was deemed fit to continue to play (the headlines the next day hailed: "X-Ray of Dean's Head Shows Nothing") Another legend from the '34 series has Player/Manager Frankie Frisch walking to the mound from Second base during Game 7. The frustrated manager told Dizzy that if he didn't quit "fooling around" he would pull him from the game. Dean looked at Frisch and said "No you won't." Frisch thought about it for a moment, then returned to Second.

Our Collection next moves to Comiskey Park with the Philadelphia Athletics visiting the Chicago White Sox on Jul 30, 1936; the Boston Red Sox visiting on Aug 2, and the Chicago City Championship against the Cubs on Oct 2. The cross-town series seems to be an exhibition outing to help drum up interest in baseball. The important October Baseball action in '36 would be another cross-town rivalry.

The Subway Series would be reprised the next year. The Yankees would be champions again in five games, and though they played beautifully (the Yankees committed no errors in the '37 series, a first), it would be Lou Gehrig's last healthy season.

Gehrig reported that he was "tired" during the second half of the 1938 season. The Yankees would make their third consecutive World Series appearance, this time against the Chicago Cubs. Gehrig, who had previously been thought to be Babe Ruth's Home Run heir, had 4 hits out of 14 at bats, all singles. (During 1939 Spring training, Gehrig would collapse while on the field. On Apr 30 he went hitless against the Washington Senators in his 2,130th consecutive Big League game. The next day was a day off, but on May 2, Gehrig benched himself. He would soon be diagnosed with amyotrophic lateral sclerosis late called Lou Gehrig's Disease.)

Lou Gehrig wasn't the only sad story of the 1938 series. Dizzy Dean, leader of the '34 St. Louis "Gas House Gang", led the Chicago Cubs through the 1938 National League race, but ran out of gas himself during the World Series, and the Cubs were left behind in four straight games.

The Midsummer Classic is also part of our collection, beginning with the 6th Major League All-Star Game in 1938, played in Cincinnati. Also featured is the 1939 All Star Game at Yankee Stadium, and each All Star Game through 1943. The '48, '56, '60, and '66 All Star Games are included.

Scanning our collection, you may notice that the list thins during the War Years. This could be incorrectly interpreted as Major League Baseball disappearing during the Second World War. Soon after the United States entered hostilities, Baseball commissioner Kenesaw Mountain Landis wrote what would be remembered as the "Green Light Letter" to President Roosevelt. Although the nation was moving to a War-footing, Landis begged the President to allow Professional Baseball to continue. Roosevelt replied by saying that there would be less unemployment and longer work hours due to the War, and that the opportunity for people to relax at the Ballpark would be more important than ever.

This was no protection for players from their draft boards, and many Major League players served with distinction. The 1942 All-Star Game at New York's Polo Grounds takes on special meaning when seen in this light. Listeners and fans cannot forget that there is a War going on- the game is delayed and mandated to end at 9:30 because of a scheduled "Black Out Practice" in New York City. As a follow-on to the Major League All-Star game, the winning squad (the American League) was scheduled to appear two nights later at Cleveland's Municipal Stadium to play a squad of Army and Navy players. Another important milestone for both Baseball, and the Nation, would be the breakdown of Baseball's Color Line when Jackie Robinson signed with the Brooklyn Dodgers in 1945. Robinson deservedly gets most of the recognition and praise for the move. As important as Jackie Robinson was to the toppling of the color barrier, credit also needs to be given to the Dodger's General Manager, Branch Rickey.

There had been no formal rule in Baseball to keep Blacks from playing since the 1880s; the Color Barrier was a "Gentlemen's Agreement". However Rickey objected to it on both idealistic and business grounds. The idealism stemmed at least in part on his experience as a Minor League Player, when one of his teammates was denied accommodation in the hotel where the team was staying. Rickey would later state "I may not be able to do something about racism in every field, but I can sure do something about it in baseball." The move also made good business sense- the Negro Leagues, while not as profitable as the Majors, had developed some marvelous athletic talent. Rickey recognized that the organization that broke the Color Barrier would have first pick of that talent. Jackie Robinson was indeed a talent the Dodgers could be proud of. He was awarded the inaugural Major League Rookie of the Year Award in 1947.

Until 1953, Major League Baseball was made up of only eight American League and eight National League teams, the furthest West and South of which was St. Louis. The longest possible road trip would involve no more than a 24 hour train ride. The initial ripples of expansion met with little opposition, except perhaps in the team's home markets. In '53 the Boston Braves became the Milwaukee Braves, and the next year the St. Louis Browns became the Baltimore Orioles and the Philadelphia Athletics became the Kansas City Athletics. These were all three less than successful teams from small markets.

This is a contrast to the objections raised when the Brooklyn Dodgers moved to California, followed by the Giants, before the 1957 season. Heart-broken New York fans were without a National League Team until the expansion Mets were established in 1962. Having two teams in California made it economically feasible for teams to travel to the West Coast.

More moves and expansion would result in the 30 Major League Teams we have today.

Our collection ends with the 1966 World Series, which the featured the Baltimore Orioles sweeping the LA Dodgers. This is by no means the end of Baseball history. 1966 would see the formation of the Major League Baseball Players Association. The Marketing and Hype era was still on the horizon; the increase of athleticism thanks to improved training, and the rise of Free Agency would change the game in ways that were hard to imagine in 1966. The Designated Hitter and Astro-Turf were also still to come.

But 1966 is a good place for the collection to end. In 1965, the first network to carry nationwide baseball coverage with the Saturday "Game of the Week." Although it was a ratings failure, the network coverage helped Major League Baseball open a revenue stream that changed the game, perhaps more than any other single factor.

Baseball remains what it always has been: a game. Granted, it is a game that influences and is influenced by great sums of money. But it is just a game, which can be enjoyed and relived time and time again. By listening to the great games of years past, we allow the great players to continue living, and to remain young forever. Perhaps, in this way, we find a way to hold on to our own youth. We find a world where the grass remains green, and the crack of the ball coming off the bat is the one sound that really matters.

(Please note recordings in this collection are of mixed sound quality)