During the early part of the Roaring Twenties, Bamberger's Department Store in Newark, New Jersey, put in a line of those "newfangled" radio receivers for their rather upscale patrons (the Newark store was the largest department store in the country for a time). Like several other players in the early commercial radio market, Bamberger's saw the potential for radio but realized that no one would be interested in buying the equipment unless there was something worth listening to. The store dedicated part of its sixth-floor to house a studio and applied for a broadcast license from the US Department of Commerce. The new station was given the randomly assigned call letters WOR, and on February 22, 1922, a homemade cardboard cone was attached to a microphone taken from a telephone handset and placed in front of a phonograph playing Al Jolson's "April Showers". 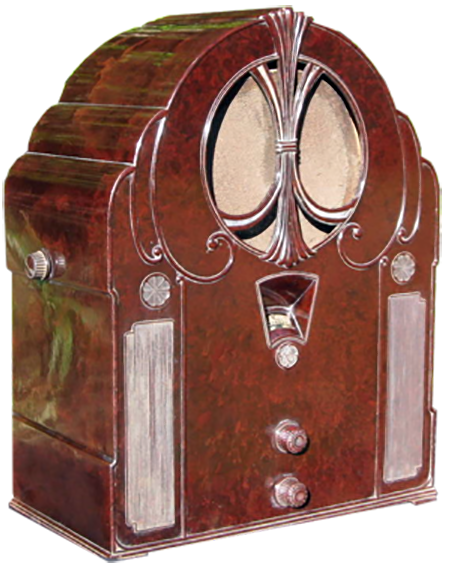 The station opened a second studio in Manhattan (retaining its Newark license) in December 1924 to take advantage of the Broadway showbiz community. WOR became the flagship station of the newly formed Columbia Broadcasting Service in September 1927 but in 1934 partnered with WGN Chicago and WLW Cincinnati to form the new Mutual Network. In 1957, WOR parted with Mutual to become an independent "full service" radio station.

"Full Service" meant that the station's format featured music, news and information, sports, and radio plays. WOR began emphasizing its spoken-word broadcasts, although it was a leading "MOR" (middle of the road) music station, blending popular and adult contemporary tunes. Although the networks had mostly abandoned radio plays by 1962, radio dramas remained a regular feature on WOR through at least the late-1970s. One of those shows was The Author's Studio.

The program's premise was to serialize works of great literature into quarter-hour blocks played over several days. The adaptation of William Makepeace Thackeray's Vanity Fair (originally published in 20 installments of Punch, 1847) played over at least a dozen episodes in 1975 or 1976. Other adaptations of the story include one by Orson Welles' Campbell's Theatre for CBS on January 7, 1940, and by NBC's Favorite Story series hosted by Ronald Colman on December 6, 1947.

Although the novel is set during the Napoleonic Wars (1814 to 1832), it is more accurately a satire of English society during the early Victorian Era when Thackeray was writing. While it was being serialized in Punch the story carried the subtitle of "Pen and Pencil Sketches of English Society", and most early editions of the book were illustrated with Thackeray's line drawings. When it was published as a bound edition in 1848, the subtitle was changed to "A Novel Without a Hero".

Vanity Fair is told through the eyes of Becky Sharp, who clearly sees the class differences of English society and will use any means at her disposal to advance from her station as a governess, and her charge, Emmy Sedley, whose good-natured naïveté leads her from being the novel's heroine to its stooge.