The American Forum of the Air

One of the first Public Affairs Panel Discussion Programs, American Forum of the Air presented an often lively debate of National Issues.

Choose your CD format
or order disks individually: Add to Cart Add to wishlist
Play a sample episode from January 17, 1953:

One reason that Radio became a dominant form of media in the Twentieth Century was that broadcasting relied on a relatively simple and accessible technology. An ambitious and knowledgeable operator could make his own serviceable broadcasting equipment, although there were several industrial manufacturers which built broadcasting gear for professionals. This was not cheap, but relatively affordable. 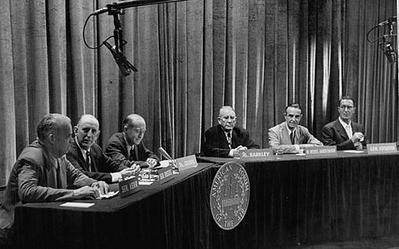 Broadcast is easy, but not quite free. There are essentially two ways to finance a broadcast, state-backed or commercially. State broadcasts serve the government (whether or not the government serves the People is a separate discussion) and may or may not respect Free Speech. Commercial broadcasting is sometimes derided for being profit-motivated. However, the profit motive in broadcasting helps to ensure that high-quality content reaches the airwaves.

A government-supported broadcast needs to satisfy the State's desires while a commercial broadcast has to attract listeners or it will come "unprofitable" and be taken off the air. However, because broadcasting licenses are issued by the Government, commercial broadcasters have a mandate to "serve the public interest". Serving the public interest can take several forms, although it generally needs to be entertaining and relevant enough to keep listeners from changing their dial settings.

One of the first public affairs panel discussion programs was Then American Forum of the Air, created and hosted by Brooklyn-born attorney Theodore Granik. While working his way through night school at St. John's University Law School, Granik was employed as a copywriter and sports reporter for WGBS New York, the station belonging to Gimbel's Department Store. Fascinated by his studies, Granik managed to convince the station manager to create Law for the Layman in 1928. The show enjoyed the support of the Law School, and several members of the St. John's faculty appeared on the air.

WGBS was bought by the Hearst Syndicate in 1932, and Granik moved on to WOR, which was in the process of becoming the flagship of the then-forming Mutual Network. The program went on quietly until an on-air debate between Representative Emmanuel Cellar of Brooklyn and Mrs. Elia Boole, president of the Woman's Christian Temperance Union; the subject was Prohibition. The debate soon became heated, and Mutual was delighted enough with the response to approve a series of radio forums built around a debate format. The American Forum was born.

Although 'Forum had found a permanent home on the Mutual Network, the Network was unwilling to pay for more than production expenses. A salary for Ted Granik was out of the question. Fortunately, he had earned his law degree in 1929 and hung his shingle in Brooklyn for a time before a four-year stint as New York Assistant District Attorney. The show moved to Washington DC when Granik accepted a posting as Special Counsel to the Federal Housing Authority. In 1941, he became an Advisor to Brig. General Hershey of the Selective Service Administration and in 1942 began serving with the Chairman of the War Production Board.

During his Washington stay, Granik used his connections to find guests for the program. At first, he found that Congressmen were reluctant to appear, but thanks to the show's national reach, House members soon saw a huge mail response to their appearances. Guests include Senator Harry Truman, N.Y. Governor Franklin Roosevelt, N.Y.C. Mayor LaGuardia, and many other political movers and shakers.

The American Forum of the Air stuck to a rather rigid format. The debaters were allowed to make opening statements, followed by a panel discussion of the issues. An audience Question and Answer period and closing remarks wrapped the broadcasts. Transcripts of the often lively debates were published in The Congressional Record.

The show was adapted for NBC TV in 1949 and continued on NBC Radio until March of 1956. At the time of his death from a heart attack in 1970, Theodore Granik had purchased WGSP-TV in Washington and was planning a return to the public affairs panel discussion program format that had made him famous.

See also: University of Chicago Roundtable, CBS World News Today, Democracy in America, Speaking of Liberty and Living in an Atomic Age with philosopher, Sir Bertrand Russel, and I Can Hear it Now (Edward R. Murrow).