Alcatraz's years of operation (1934-1963) almost directly coincided with the golden age of radio and many old time radio stories were based on the prison.

Choose your CD format
or order disks individually: Add to Cart Add to wishlist
Play a sample episode from May 11, 1946: 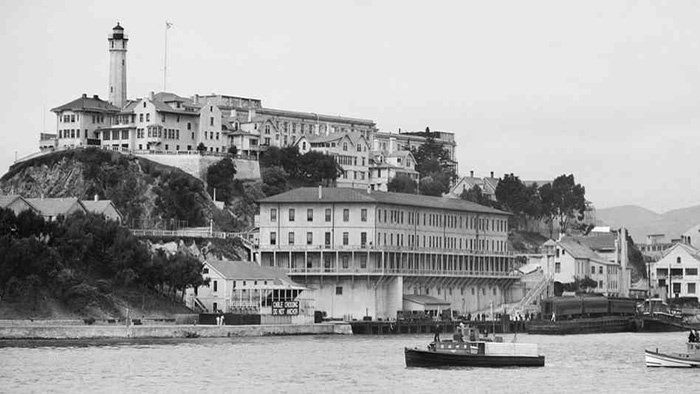 Incorrigible men against unforgiving nature and the ugliest fortress mankind could build.

An ominous-looking island that's home to men so hardened they wouldn't behave at standard prisons: little wonder Alcatraz has captured the imagination of Americans for nearly a century.

Alcatraz was used as a Federal Penitentiary from 1934-1963 and housed, in addition to prisoners who'd started trouble elsewhere, famous criminals such as Al Capone, George "Machine Gun" Kelly, Mickey Cohen, and Robert Stroud, "The Birdman of Alcatraz."

The men who were there were generally hated and feared by the public. Yet "the Rock" itself gained a reputation as being as vicious as many of its inmates. An episode of Gang Busters--included in this collection--runs down the traits that made Alcatraz escape-proof:

Silence at all times in the cell house; cell bars of two-proof alloys;
photo-electric cells that detect even the smallest pin; machine guns!
Concrete walls! A twenty-foot cyclone fence topped with barbed wire!
Then the water: a mile and-a-half of treacherous tidal currents.

History tells us that no prisoner escaped alive. Incorrigible men against unforgiving nature and the ugliest fortress mankind could build.

It didn't take long after the infamous penitentiary began operating that radio programs began featuring it. Our collection contains episodes of Calling All Cars, Chase and Sanborn Hour, Gang Busters, and March of Time.

The episode of Calling All Cars is called "Bad Men," and stars Gale Gordon. The Gang Busters episode dramatized real events that had happened only nine days earlier. If your tastes run to history and tales of criminals, this collection is for you.