I am told, by those that know, that there comes a time in life when we tend to drift back into the happy times of our youth. For me this is undoubtedly the 1950’s when life was easier, less stressful and we were happy with ourselves. I grew up in a tenement building in Leith, which is the Port for Edinburgh. These buildings were usually between four and five floors high and have been referred to as vertical villages. Although TV was available, it was priced out of the reach of most of us. Our entertainment at home was focused around the radio and board games played on the kitchen table. 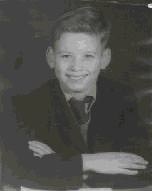 Picture a winter’s night, with the fire blazing in the kitchen grate, you have been bathed, hair combed, clean pyjamas, dressing gown and slippers. You are a happy contented little boy crawling into the big chair by the fire and waiting with excitement and anticipation for you Dad to settle down beside you. The Radio is tuned to the "Light Programme" - then with the roar of jet engines you were blasted off into a ‘Journey into Space’. Listening to the voyages of the ‘Discovery’ with its crew of ‘Jet Morgan, Doc, Mitch and Lemmy’; now takes me back to those halcyon days’ of long hot summers and always-blue skies.

In our house the radio lasted as the main source of entertainment well into the 1960's; by then the price of a TV had come down and my father was earning more money, but even then the radio was still used more than the TV.

For me Old Time Radio is listening to programmes like ‘The Navy Lark, ‘Two Way Family Favourites’, ‘The Goon Show, ‘Valentine Dyle’ as ‘The Man in Black’ and Tales from The Black Museum. And where would we have been without ‘Workers Playtime. When I was about 10 years old I built my first crystal receiver, which with all of its problems of tuning, bad reception and having to use headphones, made the listening to programmes fun and slightly secretive; when I listened to it under the blankets when I was supposed to be asleep. Of course the radio was the main broadcaster in those days as commercial radio was still some way off.

However when night fell and the range of broadcasting was increased, we could receive Radio Luxemburg broadcasting on 208M on the medium wave. In addition to pop music, there were the adventures of ‘Dan Dare’ brought to you by the makers of Horlicks. This was transmitted each evening at 1900 for 15 minutes and was followed by ‘Jeff Arnold and Riders of the Range. Old Time Radio brings all these things back to me with a startling clarity. Today the radio still plays an important part in my life and I will listen to a radio play in preference to watching it on TV. Radio is a marvellous medium, for unlike television, the radio forces you to use your imagination, and what you listen too is yours, and not the creation of a unknown Director.