When I was seven, we moved from the city, to live with my Grampa John. He had a small farm north of town on a big 'crick'. Gramps and I were pals. I followed him wherever he went. He had bee hives. He'd outfit me with all the paraphanilia to keep the bees from stinging me, then we'd go out and 'tend-the-bees'. 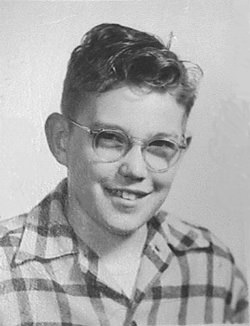 After a hard days work of poking at fish, dragonflies and frogs down at the 'crick', mom would call us in for supper. Gramps would go to the kitchen sink, splash his face, getting water all over. I'd imitate him. Mom would get after me for doing what Gramps did, He never got scolded. We'd all sit at the table while mom set steaming platters of food in front of us. Gramps would say 'prayer' then we'd eat. Gramps always had a comb of honey on the table and would cut off a chunk with his tableknife and tap his peas. They'd stick to the honey and into his mouth they'd go, knife and all. My imitation would get a frown from mom.

After supper, Gramps would set in his rocker and I would be right at his side. 'Click' and on would come the radio at his elbow. The dial light would bloom and we'd hear a hum and a sizzle or two, as the tubes warmed up. Then the radio started barking..... "WLS, The Prairie Farmer Station. 890 on your radio dial. 50,000 watts of power." The farm news would blab with cattle, hog, corn and wheat prices. After that it really got interesting. We'd listen to The FBI in Peace & War, Fibber McGee'n Molly, Sergent Preston of The Yukon and his wonder dog Yukon King.

While we listened, Gramps would take out his pocket knife and peel an apple. He'd start at the top and make thin circular pealings, careful not to break the peel. Sometimes one peeling of that apple would be nearly three feet long, sometimes longer !!

Between shows, we'd play Checkers. He would laugh when he jumped me from one side of the board to the other and get to the king row. He was a champ in my eyes. Halfway through a game another show would come on. We'd set the Checkerboard aside to listen to Amos & Andy.

Four years later we moved to our own 22 acre 'gentlemans' farm. As the years passed I'd still listen to those radio programs but moved on to the later 'mystery shows' like Inner Sanctum [with the creaking door]....sending chills up my spine. Suspense, Yours Truly Johnnie Dollar, The Traveler [another spine tingler].

Saturday mornings at 10 O'Clock I always listened to Let's Pretend.

I still listen to many of them today through WMAQ or WBBM in Chicago on Saturday nights where they run six straight hours, or CDs I bought from OTR. They play all night long, while I sleep. Upon awakening, they are still moving onto another CD piled high with my OTR programs.

Fifty years have gone by. I still have fond memories of my time with Gramps, and listening to 'WLS, The Prarie Farmer Station'. Good Ole Tyme Radio Programs.

Be the first to comment on "Old Time Radio Memory: Johnnie: Gramps 'n me ..."