OTR Memory: Giovanni Iuliani: Into the 1950's and the Radio Lure of the Circus 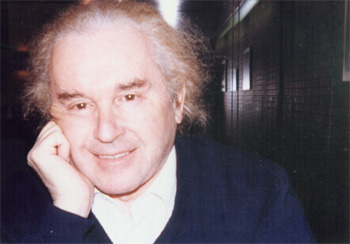 I still remember listening to Jerry at the Circus at an age when I could compare myself to the orphan. Having a dog helped even if mine did not do any particular tricks. Then there was the coming of Ringling Bros and Barnum & Bailey Circus. Billboards everywhere advertised the coming of the Greatest Show on Earth. The excitement was fever pitch when my parents decided to take my sisters and I to the circus. We bought a live chameleon and would play with it when listening to Jerry at the Circus adventure on our Marconi radio set.

When a new radio series called The Clyde Beatty Show came along I was eager to join the circus. Little did I know that by the time I reached 18 years old I would be working as an outside talker in front of a circus side show. Then, as the years went by I became a ringmaster and toured on many circus shows throughout the North-American Continent.

Then one day I became interested in clowning, remembering the old Jerry at the Circus radio program and the clown that befriended Jerry. It helped me in my new endeavor of wanting to be an old time clown by reviving old and forgotten routines.

As the years went by I researched the old circus clown routines and built a repertoire. Then, along with my son, we started the National Clown Circus in Canada. 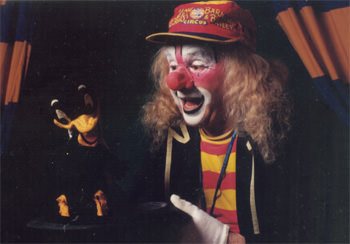 In 1998, the Canada Post was planning to issue a series of postage stamps commemorating the 200th Anniversary of the Circus. A Canada wide search for authentic circus clowns was made and we were selected to be on the stamps. Apart from each being on a stamp, we are the only father and son ever to appear on stamps other than the royal family.

In 2001, the Canada Post decided to honor the 75th Anniversary of the Shrine Children’s Hospital. Again they chose me to represent the Shriner Clown out of 250 participants. I will soon be 65 years old and still occasionally perform as Patapouf the Clown.

Imagine if I listened to Flash Gordon instead of Jerry at the Circus. Why I would have been an astronaut!

Be the first to comment on "OTR Memory: Giovanni Iuliani: Into the 1950's and the Radio Lure of the Circus"