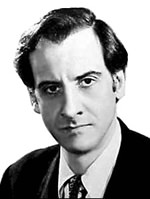 Plays for Americans [1942] and Everything for the Boys [1944] reunited Conried with the volatile Arch Oboler, whose patriotism moved him to give up more lucrative paying jobs and donate his time and talent to producing programs geared toward the nationalistic fervor surging through the county during that period of history.  On Plays for Americans, Conried performed with the powerful German actor Conrad Veidt in the lurid, anti-Nazi themed drama "Hate", which was described by Variety as "a scalp raising cry against a barbarous menace."  Conried would also get a chance to perform a histrionic Hitler in the episode "Adolf and Mrs. Runyon" with Bette Davis….

Radio Life magazine related a story connected with the "Adolf and Mrs. Runyon" broadcast:  "Hans Conried, versatile young radio actor who played the part of Adolf (last name Schickelgruber) on Oboler's 'Adolf and Mrs. Runyon', was paged for a telephone call immediately after the show went off the air.  Into a booth in the Radio City lobby went Conried oblivious to the fact Dick Ryan, a fellow actor, was in a booth directly across the hall, making with such conversation as 'If you ever play Hitler again on the radio, it will be at your own risk'.  The 'gag' had a premature ending, when actor Ryan, who just couldn't act out his self-styled role of heckler, leaned against the door of his telephone booth, which was half ajar, and landed flat on his chuckle-creased face in the hall outside the booth Conried was using." 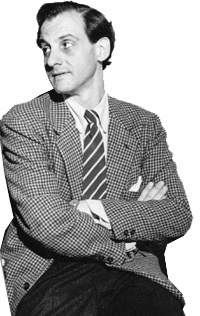 Actress Mercedes McCambridge recounted a story about one particular rehearsal, which involved Conried and director Oboler, many years later to host John Moore during an interview for his radio show based in Atlanta, Georgia.  According to Moore:  "Arch Oboler was in charge, and the cast included Hans Conried.  [Mercedes] told me that Hans had obviously put a lot of work into the characterization he was doing… She said it was as if he had decided to create the characterization to end all others for that type of part.  It was completely over-the-top… Whatever he was doing, it was too much, didn't fit the show, [and] didn't mesh with the other characters; it just didn't work.  From the booth came the voice of Arch Oboler saying, 'Mr. Conried, I think it would be better if you would tone it down a bit'… He did, but it was still way too much.  Again came the voice over the talkback, "Mr. Conried, I'd appreciate it if you could tone things down some more for us.'  The performance was still not making it, so again came the voice from the booth, "Mr. Conried, it's just not working.  Just forget all the characterization and give us the REAL Hans Conried"… At that, [Hans] drew himself to his full height, nose in the air, and declaimed, 'My good man, there is no REAL Hans Conried!'"

Suzanne Gargiulo hails from the Northern California city of San Rafael, where at an early age she developed a love for history, old films, and colorful characters.  The latter penchant was undoubtedly the catalyst for discovering the talented and eccentric character actor, Hans Conried after viewing his 1953 fantasy film The 5000 Fingers of Dr. T.  Many years went by and once again Conried came to the fore—along with a desire to know more about this amazing actor.  It was quickly discovered there were no biographies in print of his life and work, and what little was available seemed fragmentary at best.  The decision was made to remedy this sad situation. After years of research and interviews with family, friends, and colleagues of the late actor, the book—Hans Conried—was published in 2002 by McFarland & Co., Inc.  This book is the most complete resource to date of Conried's life and work in radio, film, television, stage, and voice work. Conried's family had allowed the Boston University to archive his papers—Hans was a bonafide pack rat so the collection contains boxes and boxes of them—so a move to the Boston area seemed like a good idea.  And it certainly was, up to a point.  When that point was reached, the author once again moved back West.  After settling into a new life in the wilds of Wyoming (and a surprise marriage), a resurgence of interest in silent films led to not only the organization of a silent film festival in her new hometown, but a desire to explore the life and career of the legendary actor and master of make-up, Lon Chaney.  Though a few biographies exist of Chaney, all seem strangely incomplete.  Bizarre facts and situations are mentioned in passing and then dismissed without further study.  For example, who was John Jeske and what was his connection to Lon and his wife Hazel?  Why was he described as Chaney's "constant companion"?  What seemed like a casual fact-finding mission at first ended up sparking the flame that ignited a full blown book idea.  This project proved to be much more difficult than the first and fraught with controversy.  Jeske had no intention of being remembered and Chaney preferred it that way.  The book—Lon Chaney's Shadow:  John Jeske and the Chaney Mystique—was released in 2009 by BearManor Media.

The present time is one full of enjoying hearth and home and paying the bills.  New projects are on the horizon, though, so stayed tuned!

Spoiler : Been a fan of Hans Conreid for years but I've been trying to find the radio episode he's described here as having done with Conrad Veidt. It's called "Hate" also part of the Plays for Americans series. Has this been Lost? If not where might I track it down?