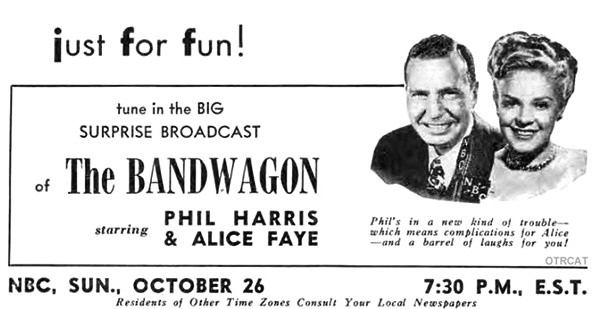 Don't Despair
Use Your Head
Save Your Hair
Use Fitch Shampoo

These lyrics, sung to the tune of "Smile for Me," comprised the theme song for one of radio's most popular programs during the 1930's and '40's: The Fitch Bandwagon.? Coming on at 7:30 p.m. on Sunday evenings, it was heard by millions nation-wide and helped to make Fitch Shampoo a widely recognized and best-selling product.

While shampoo and the circus might seem like an odd combination, during the 1940'sThe Fitch Bandwagon regularly featured Merle Evans and the Ringling Bros. and Barnum & Bailey Circus band in live broadcasts direct from Madison Square Garden.?? These annual circus programs were immensely popular and helped to promote Ringling's New York opening stand.? Today, surviving recordings of these broadcasts preserve for posterity an aspect of circus history that is impossible to obtain from other historical artifacts such as vintage photos, printed programs, route books, newspaper clippings, and so on. (Where else but on a recording could you hear the voices of Fred Bradna or Robert Ringling, or listen to original music from Ringling production numbers from the early 1940s?)

The man responsible for The Fitch Bandwagon was F. W. Fitch, a self-made millionaire, savvy businessman, and the first Iowa manufacturer to sponsor a national radio program.

Frederick Walter Fitch was born January 28, 1870 in Burnside, Iowa.? Following the death of his father, he was signed over as a hired farm hand at the age of 8.? For the next several years, he worked on various Iowa farms while managing to complete an 8th grade education. Unable to enter the University of Iowa for lack of a high school diploma, he became a barber in Madrid, Iowa, where he soon began developing a number of hair-care formulas with the help of a Dr. Brechbill. His first product was a hair tonic labeled as "Ideal Hair Grower and Dandruff Cure."? (The hair-growing claim was later dropped.) 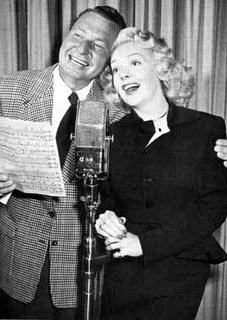 In 1892, at the age of 22, he founded the F. W. Fitch Co. in a barn in Boone, Iowa where he had his own barbershop.? A master salesman, the colorful, impeccably dressed Fitch spent long days on the road, marketing his hair-care products to barbershops.

By 1917, Fitch was able to move his operations to a new four-story plant in Des Moines. Eventually the F. W. Fitch Company had plants in Des Moines, Los Angeles, Bayonne, N.J., Jackson, Mississippi, and Toronto, Ontario, and manufactured more than 40 items.

After years of selling his shampoo, hair tonic and other products only to barbershops, in 1932 Fitch began offering them directly to the public through drug stores.? To reach this new market, Fitch decided to sponsor a radio program.? A weekly 15-minute program of live music was produced and broadcast primarily to Iowa listeners over radio stations WOC in Davenport and WHO in Des Moines.?? This proved so successful that, in the fall of 1933, The Fitch Bandwagon premiered on the NBC radio network, which, at the time, consisted of only twenty-three stations.

?In 1938, and after several format changes, The Fitch Bandwagon was expanded to a half-hour and featured popular name bands of the day such as Cab Calloway, Ozzie Nelson, Freddy Martin, Harry James, Tommy Dorsey, and Guy Lombardo.? A unique feature of the program was that each broadcast originated from the city where the guest band happed to be appearing.

Coming on between two immensely popular Sunday evening programs -- Jack Benny at 7:00 p.m. and Edgar Bergan-Charlie McCarthy at 8:00 p.m. -- The Fitch Bandwagon had an audience of millions of radio listeners.

This did not escape of the notice of F. Beverly Kelley, director of radio publicity for the Ringling-Barnum Circus. In 1939 Kelley contacted The Fitch Bandwagon's producers to sell them on the idea of having Merle Evans and the Ringling band appear on the program.

Despite the obvious tie-in between a circus band and a bandwagon, it took Kelley two years to convince the advertising agency that represented Fitch Shampoo to devote an entire broadcast to circus music.? Kelley's persistence paid off, however.? The Ringling band's first appearance in 1941 brought in the heaviest telephone and fan mail response that the program had ever received.? For the next seven years, the annual broadcasts that featured Evans and his band would rank among The Fitch Bandwagon's most anticipated and best-remembered programs.

Scripts for the circus broadcasts were written by Kelley and radio scriptwriter Ward Byron.

Each year the Fitch Company would invite a large audience of children to attend the broadcast and then remain for the circus performance that followed.? (During the war years, these invited guests were often the children of service personnel serving overseas.) Their youthful cheers and laughter helped to convey to the radio audience that special sense of excitement that comes only from attending a circus performance!

In addition to Evans, Bev Kelley was prominently featured during each program, enthusiastically describing the stupendous new features of that year's circus, as well as introducing various big top personalities.

One of the highlights of each program was an extended medley of traditional old-time circus music, with Evans and the band making split second segues from one piece to the next on whistle cues.?

F.W. Fitch sometimes attended these circus broadcasts in person and, wearing a musician's uniform, would sit in with band and fake trombone.

By 1944, The Fitch Bandwagon's format was expanded to include comedy skits and standup routines in addition to the music provided by the guest bands.? In 1946, it became a full-fledged situation comedy starring bandleader Phil Harris (already well known from his appearances on Jack Benny's program) and his wife Alice Faye.? Eventually renamed The Phil Harris/Alice Faye Show, it remained under Fitch sponsorship until 1948.

In 1949, Fitch sold his business to Grove Laboratories in St. Louis for a reported $2 million dollars.? Two years later, he died at his home in Des Moines after a long illness.

Of the Ringling band's appearances on The Fitch Bandwagon, at least two can still be heard today.? What makes this remarkable is that, during the 1940's, network radio shows were presented live and were seldom if ever recorded.? (Back then there was no such thing as "summer reruns.")? If a particular program was recorded, it was for some special purpose. For example, a local radio station in a different time zone might opt to record a live network program so that it could be aired at a more convenient time for its listeners.? (A live broadcast taking place in New York City at 7:30 p.m. would normally air at 4:30 p.m. on the West Coast.? By transcribing the program, a west coast station could run it at 7:30 p.m. local time when more people would be listening.)? Radio programs might also be recorded as a favor to a guest performer or at the request of the sponsor.? During World War II, many popular radio programs were recorded for the Armed Forces Radio Service for later airings by overseas military stations to help bring a touch of home to deployed troops.?? In an era before magnetic tape, most of these recordings were done using large 16-inch records referred to as transcription disks.? Once tape recording was introduced in the late 1940s, many of these transcription disks were junked, along with the special equipment needed to play them.? While a few disks were saved by far-sighted collectors and station employees, only a very small fraction of the recorded shows from "radio's golden age" are still around today.

Tapes of the complete 1943 Fitch broadcast have been circulating in the collectors' market for many years now.? (This writer bought his copy back in 1965 while still a college freshman!)? The program was hosted by Toby Reed, assisted by veteran NBC announcer Ben Grauer (who also did the Fitch Shampoo commercials.)? Heard during the broadcast are Merle Evans, Bev Kelley, Ringling's long-time equestrian director Fred Bradna, and F.W. Fitch, himself.? In addition to a nice selection of traditional old time circus music, the 1943 broadcast includes "She's the McCoy," an original piece of music written for the "Changing of the Guard" elephant number that was first performed that year.?

Just within the last few years there has been particular interest focused on Ringling-Barnum's 1944 season because of the several books that have been written about the tragic fire in Hartford, Connecticut that destroyed the big top and forced the show to finish the season playing under the sky in ballparks and stadiums.?? A transcription disk with the Armed Forces Radio Service's version of the Ringling band's 1944 Fitch broadcast recently surfaced on eBay and was acquired by this writer.? Intended for non-commercial use on military radio stations, all references to "Fitch" were edited out as well as all of the Fitch shampoo commercials and (we must assume) any references to or appearances by F.W. Fitch.? This particular program has special historical value because of an on-mike appearance by Circus President Robert Ringling, who devotes his segment to promoting Panto's Paradise, the show's big spec for 1944. While Merle Evans and the band play the spec's original music score, Ringling and program host Tom Reddy provide a running commentary of what is supposed to be going on: the appearances of various costumed characters and animals, bits of business that were performed by the clowns and other performers, and descriptions of the animal blankets and major spec elements such as the "Jumping Jack Float" and the "Cloud Float" drawn by 16 elephants.? While one might lament the fact that the program is abridged, the inclusion of the long-unheard Panto's Paradise music is more than amble compensation to circus fans and historians alike.

Undoubtedly other Fitch Bandwagon programs featuring the Ringling band have somehow managed to survive to the present day.? These historic broadcasts can be made available for the enjoyment of those of us who love authentic old time circus music, especially when it is performed by Merle Evans and the under-canvas Ringling-Barnum band!

About the Author
Eric Beheim 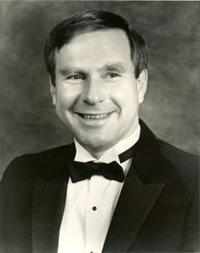 leads a multi-faceted career as a free-lance writer, professional musician, and owner of his own music and sound project studio.?

Born in the first wave of "baby boomers" he grew up with radio and remains a life-long radio enthusiast.? His particular interests are collecting news and commentary programs from the late 1930s and early 1940s (including World War II news), and programs that feature performances of operettas and musical theater presentations.

Since 1996, he has been compiling, arranging, performing, recording and assembling soundtracks for classic silent films that are released commercially in the DVD format.

Eric and his wife Pat, who assists him in his in-house studio, reside in Descanso, California, a small western/mountain community located east of San Diego.

Spoiler : For me this is what the Internet is all about. Recalling old recollections such as this.

Reply
Spoiler : My husband and I have been listening to the Phil Harris and Alice Faye radio shows for 20+ years. Recently we've been listening to their show when it was sponsored by Fitch Shampoo. Can you tell us who the female voice is for their Fitch shampoo commercial at the beginning of the show. I'm certain it was Alice Faye, but my husband disagrees. 😅 Thanks so much! Christine

Reply
Spoiler : I have a picture of one of the bands that played for the Shampoo hour. In fact because the bands were segregated my father is in the all black band and I'm not sure who the leader of the all white band was. My father was Bill Moore a bass player.