If you’re a fan of old time radio, you are undoubtedly aware of Orson Welles’ famous 1938 “War of the Worlds” broadcast -- the one that caused a nation-wide panic by “reporting” an invasion of Earth by creatures from Mars.  The story behind this remarkable broadcast is every bit as fascinating as the impact it originally had on its listeners. 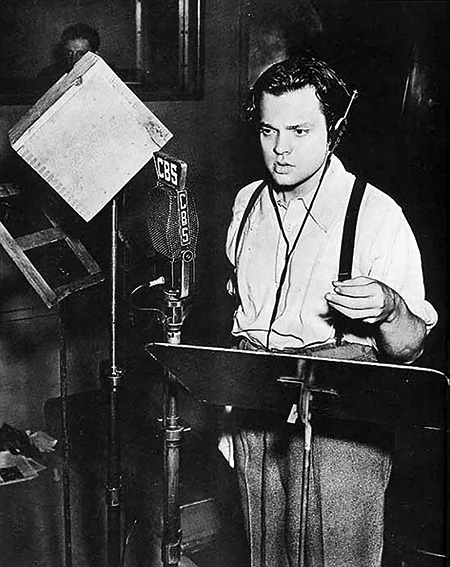 In June 1938, CBS offered Orson Welles a radio show that would present classic dramatizations in the first person singular, with Welles as master of ceremonies, star, narrator, director and producer.  This weekly, hour-long program, “The Mercury Theater on the Air” proved to be one of the most expensive radio shows of the season.  It also occupied one of the toughest time slots in the broadcast schedule: eight to nine on Sunday night, up against the fantastically popular Edgar Bergen/Charlie McCarthy program.  The show had no sponsor and, according to the word in radio circles, didn’t have much of a listening audience.

Among the series’ first thirteen shows were “ Dracula,” “Treasure Island,” and “The 39 Steps.”  The fourth program of the fall season was to be H.G. Wells’ “War of the Worlds.”  No one was very enthusiastic about it, but it seemed like good programming to throw in something of a pseudo-scientific nature.

The difficulties that arose while trying to adapt H.G. Wells’ novel into a radio script almost led to it being cancelled. Convinced that there was no way it could be made credible to modern American ears, the program’s writer Howard Kock wanted to substitute “Lorna Doone.” The final decision, however, had to be made by Welles, who was rehearsing at the theater and wouldn’t come to the phone.

With the first rehearsal only two days away, Koch and Welles’ partner John Houseman came up with a new and novel approach.  The story’s setting was shifted from Victorian England to modern-day New Jersey and the action was presented through a series of simulated “on-the-spot” news reports.

By employing this technique, the writers unwittingly gave their script an unexpected relevance that even a master showman like Welles could not have anticipated.  On October 1, 1938, Hitler’s armies had crossed the border of Czechoslovakia. As war clouds gathered in Europe, people began to rely more and more on radio news reports to keep them informed about what was happening in the world.  Even more significantly, they had become accustomed to having their regularly scheduled programs interrupted for special news bulletins.

A first rehearsal of the script was held on Thursday and a recording made.  Everyone agreed that the script was dull and that its only chance of success was to make the eyewitness “news reports” sound as realistic as possible.

The actors themselves went to great lengths to sound as believable as possible.  In preparing for his role as special network reporter Carl Phillips, actor Frank Readick listened and re-listened to the famous recording of Herb Morrison describing the 1937 explosion of the dirigible “Hindenburg.” Readick used Morrison’s emotional reactions as the basis for his own description of the meteorite opening and his first view of the leathery tentacles and terrible faces of the emerging Martians.

On Friday afternoon, the script was checked over by the CBS censor and some name alterations were made.  The Hotel Biltmore became the non-existent Park Plaza and the Columbia Broadcasting Building became the Broadcasting Building.  On Saturday, a rehearsal was held with sound effects.  A great deal of time was spent on the crowd scenes, the sounds of the battles, and the sound of New York harbor.

Early Sunday afternoon, Bernard Herrmann arrived with his orchestra of twenty-seven musicians.  The final dress rehearsal was scheduled for six.  After that, and with only a few minutes until airtime, there was a final frenzy of corrections and alterations.

The broadcast began at 8:00 p.m. Eastern Standard Time with the “Mercury Theater of the Air” theme, Tchaikovsky’s “Piano Concerto in B Flat Minor #1.”  The standard introductions were made and were followed by an announcement that H.G. Wells’ “War of the Worlds” was to be presented. 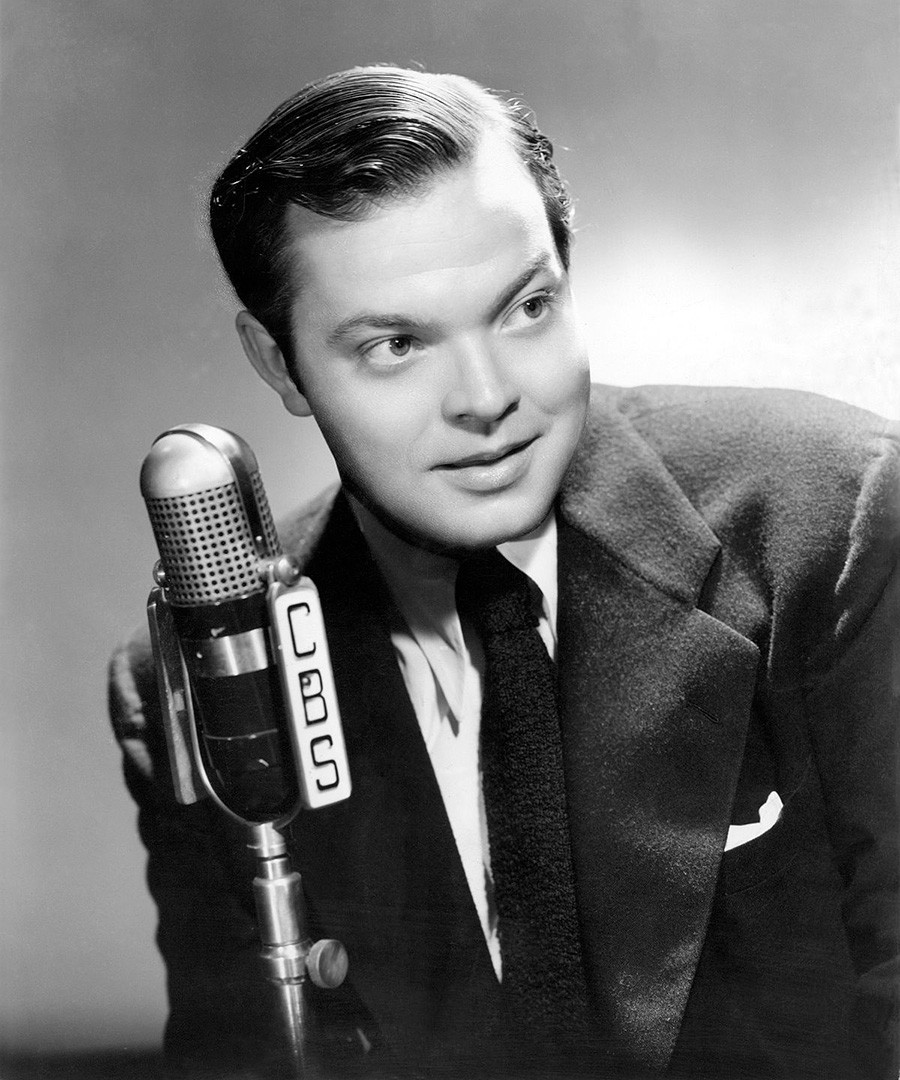 “We know now that, in the early years of the Twentieth Century, this world was being watched closely by intelligences greater than man’s and yet as mortal as his own.  We know now that, as human beings busied themselves about various concerns, they were scrutinized and studied . . . as a man with a microscope might study creatures in a drop of water.  Minds that are to our minds as ours are to the beasts of the jungle, intellects vast, cool, and unsympathetic were regarding this earth with envious eyes and slowly drawing their plans against us. In the thirty-ninth year of the Twentieth Century came the great disillusionment.  It was near the end of October.  Business was better.  The war scare was over.  On this particular evening, October 30, the Crossley Service estimated that thirty two million people were listening to their radios.”

Then came some dull meteorological and astronomical bulletins, followed by a stretch of dance music.

The broadcast would undoubtedly have been regarded as just another dramatization but for the fact that no one was listening.  Instead, a majority of radio listeners were tuned to the Bergen-McCarthy program.  However, at about 8:12 p.m., Bergen turned the microphone over to a new and not very popular singer.  Shortly afterwards, a large number of listeners began turning their radio dials in search of something more interesting.  Those who tuned in to CBS arrived in time to hear “news reports” about the mysterious meteorite that had fallen at Grover’s Mill in New Jersey.

More news bulletins followed in rapid succession, interspersed with “on-the-spot” remote broadcasts that reported that the meteor was, in fact, a metal cylinder containing Martians armed with death rays and bent on attacking the inhabitants of the earth.

The circumstances of the story were unbelievable enough.  The manner of it is presentation, however, was convincing to hundreds of thousands of people.  Some ran to rescue loved ones.  Others telephoned farewells or warnings, hurried to inform neighbors, sought information from newspapers or radio stations, and summoned ambulances and police cars.  It was later estimated that at least six million people heard the broadcast and that at least a million of them were frightened or disturbed by it.

As the “War of the Worlds” broadcast was taking place, Welles and the “Mercury Theater on the Air” actors had no idea of the disturbance they were causing. At about 8:32 p.m., Davidson Taylor, supervisor of the broadcast, received a phone call in the control room.  The CBS switchboards were being swamped with calls.  Outside sources began to report vague rumors of deaths, suicides and panic.  With less than a minute from the station break, Taylor refused to interrupt the broadcast with an explanatory station announcement.  The last announcer choked to death on the roof of the Broadcasting Building.  A shortwave operator was heard trying to make contact with anyone from the outside world. Then five seconds of absolute silence. 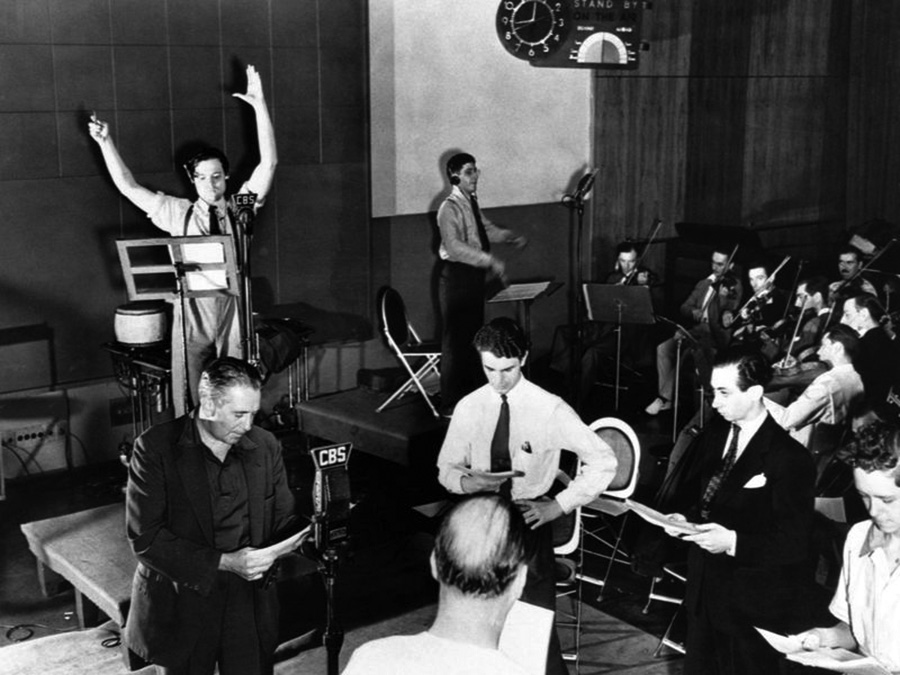 The “reality” of the Martian invasion was then shattered by the announcement, “You are listening to the CBS presentation of Orson Welles and the Mercury Theater on the Air in an original dramatization of “War of the Worlds” by H.G. Wells.  The performance will continue after a brief intermission.”

The second half of show told of the experiences of a survivor and how the Martians were eventually done in by germs in the earth’s air.  However, the most terrifying part of the broadcast had come before the station break.  Susceptible listeners who hadn’t heard that first announcement or who had failed to pay attention to it, had not stayed for the rest of the program, but had fled into the night to escape death from the Martians.

Once the broadcast ended, the Mercury people found themselves in a situation almost as terrifying as their program had been.  The building began to fill up with police.  The actors were hurried out of the studio and into a back office.  Network employees began collecting, destroying or locking up all scripts and recordings of the broadcast.

CBS was obliged to make announcements to the full network during the rest of the evening: “For those listeners who tuned in to the Orson Welles Mercury Theater on the Air and did not realize that the program was merely a modernized adaptation of H.G. Wells famous novel “War of the Worlds,” we are repeating the fact that was made clear four times on the program, that, while names of some American cities were used, as in all novels of dramatization, the entire story and the all of its incidents were fictitious.”

In addition, over half of CBS’ affiliate stations made local announcements that the program had been fictional.

Lawsuits amounting to over three quarters of a million dollars were brought against CBS and Welles for damages, injuries, and distresses of various kinds.  None of these claims were ever substantiated or legally proven, however. 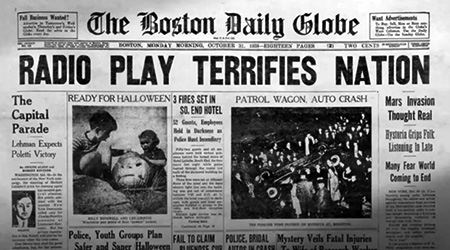 After about two weeks, the excitement began to die down when it was discovered that the casualties were not as numerous or as serious as had first been reported.

Fearing an investigation by the FCC, CBS announced that, “The Program Department will not use the technique of simulated news broadcasts within a dramatization when the circumstances could cause immediate alarm to numbers of listeners.”

This apparently satisfied the FCC, since no action against CBS over the “War of the Worlds” broadcast was ever taken.

The broadcast’s notoriety even brought an unexpected benefit to the “Mercury Theater on the Air” when the Campbell Soup Company agreed to sponsor the program at a lavish figure.

Most of the “Mercury Theater on the Air” broadcasts, including the “War of the Worlds” are available in good sound.  They include some of the finest examples of innovative and imaginative radio drama ever produced, and are well worth listening to.