There are still many things that are unknown living in the rugged regions of the world.

Choose your CD format
or order disks individually: Add to Cart Add to wishlist
Play a sample episode from September 12, 1953:

The moist winds blowing off the Northern Pacific Ocean are largely trapped between the rugged but low-lying Coastal Range and the towering volcanic Cascade Range, resulting in a dense forest which is nearly as impenetrable as the rainforest of the Amazon Basin in South America. The topography of the region is rugged mountains and the rains allowed incredibly dense timbered forests to thrive, woods so dense that they still hold many secrets. 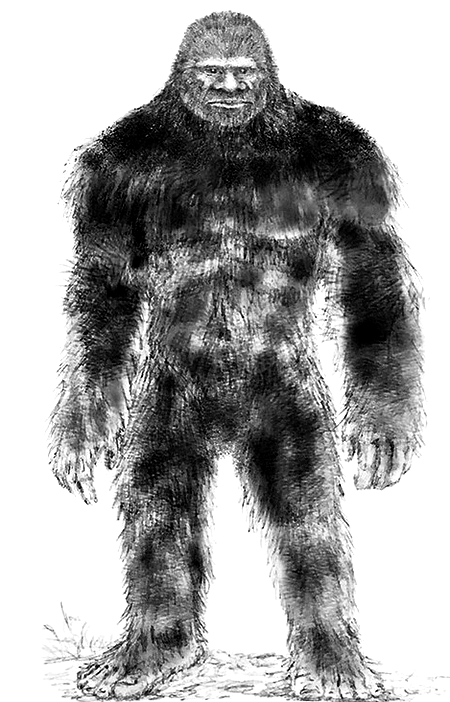 New compounds, medicines, plants, and animal species are constantly being discovered in the Amazon Rainforest because of the region's remoteness. The Old-growth forests of the Pacific Northwest are closer to modern civilization but may hold nearly as many undiscovered mysteries. Many believe that an undiscovered race of hominids, hairy, upright walking, ape-like creatures live in the hills of Washington, Oregon, and Northern California, although the evidence of this claim is limited to occasional sighting reports and the huge footprints that the creatures sometimes leave behind.

The native peoples of these regions reported a race of skookums or "wild men" living near Mt. St. Helens in southwest Washington State. The Salish peoples called these creatures "Sasquatch". White settlers who only saw the creatures' footprints (if that much) began referring to it as "Bigfoot".

The term "Big Foot" did not originate with the Sasquatch. One of the first references to Big Foot was a Huron chief known to possess great size and strength in the 1830s. The Lakota leader Spotted Elk who was killed during the Wounded Knee Massacre in 1890 was also called "Chief Big Foot". The appellation of "Big Foot" has been applied in many cultures to, well, men with big feet.

In October 1967, two former rodeo performers, Roger Patterson and Bob Gimlin rode into the woods along a tributary of California's Klamath River with a rented 16mm movie camera. They filmed several feet of "horseback footage" before spotting and filming a huge, bipedal, hairy creature striding across a sandbar. At frame 352 of the famous clip, the creature turns and looks directly into the camera, resulting in the most important Bigfoot photograph of all time.

The Patterson-Gimlin Film is widely considered to have been a hoax showing "a man in a fursuit" although there are also several legitimate scientists who claim that the clip shows a genuine Bigfoot. These claims are substantiated by footprint casts taken at the now lost site and others. The "PGF" is one of the most important artifacts of the so-called pseudo-science of "Crypto-zoology".

Another important creature studied by crypto-zoologists is the Tibetan Yeti. Located in the heart of Asia's Himalayan Mountains, the Tibetan Region is another of the most isolated in the world. "Yeti" refers to a wild man living in the slopes of the highest mountains on earth (although the term can also be a reference to a great bear). Lieutenant-Colonel Charles Howard-Bury of the 1921 British Mount Everest Reconnaissance Expedition coined the term "Abominable Snowman" to refer to the Yeti after his guides showed him huge footprints in the snow.

Escape, September 13, 1953, "The Abominable Snowman", from a story by Anthony Ellis. Three Americans have arrived in the Himalayan Mountains too late in the season for climbing. Their goal is to capture the elusive Yeti or "Wildman". They cannot hire porters for their expedition because the native porters know that the Yeti are cannibals.

Gunsmoke, April 24, 1960, "Stage Snatch". Marshal Dillon is escorting a murderer, Rowse, to Hays City to stand trial and hang. In the pass, the stage is stopped by Matt's old friend, the Indian warrior Bigfoot. Rowse killed Bigfoot's father, and the Warrior is determined to dispense "Indian Justice".