Yehudi Menuhin was a child prodigy on the violin, and worked to help the German people recover their cultural identity in the wake of the Holocaust.

During the Hippy/Youth subculture of the Sixties and Seventies, there was an oft-stated popular belief that "music could change the world". This generation was one of the first to grow up being able to share truly portable music. Portable, if rather low-fidelity phonograph players were common, music could be shared on increasingly popular transistor radios, and public-address loudspeaker technology was advancing to make it possible to fill an entire park with music. On a smaller, more personal scale, no gathering of young people at the time would have been complete without a couple of guitars and perhaps a smattering of other instruments. 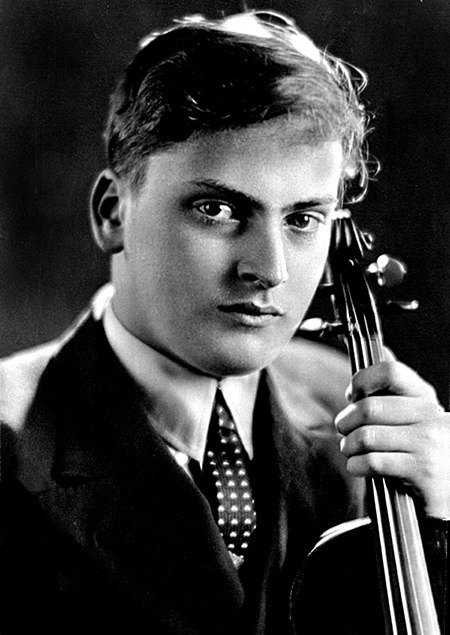 Music could, indeed, change the world. The older generation, upon hearing the type of music the youngsters were listening to, struggled to believe that it could be a positive change.

The notion that music could be a positive force for the enrichment of people's lives certainly did not start with the counterculture. It seems conceited to imagine that one small man with his violin could, in fact, "change the world", but if ever there was a musician with the talent for this achievement, it would have been Yehudi Menuhin.

His parents were radicalized anti-Zionist Belorussian Jews who emigrated to New York City. While looking for an apartment, they were shown a place near Central Park where the anti-Semitic landlady told them proudly, "And you’ll be glad to know I don’t take Jews." After informing the bigot of her mistake (and finding another apartment), Marutha swore she would name her unborn son "Yehudi", which is Hebrew for "the Jew". (When Menuhin appeared on The Pepsodent Program, Bob Hope's sidekick Jerry Colonna was greatly amused by the name and came up with the catchphrase "Who's Yehoodi?" Soon, the phrase came to mean someone who was supposed to be there but wasn't, the Navy even called an early Stealth technology program "Project Yehudi".)

Yehudi was born in 1916 and would have two younger sisters, both of whom would become musicians and artists in their own rights. The family moved to San Francisco in 1918 where the elder Menuhin's spared no expense for their children's artistic development. Yehudi performed as a soloist with the San Francisco Symphony in 1923. Towards the end of the decade, the Menuhins traveled to Europe where Yehudi received further training and chances to perform. Noted physicist Albert Einstein heard Yehudi play at a Berlin concert in 1929, and noted, "the day of miracles is not over... Our dear old Jehovah is still on the job".

Menuhin was given a draft deferral during the War as a married father but toured Latin America, Great Britain, Alaska, the Pacific Theater, and camps in the Continental US to play for Allied troops (he would give at least 500 performances for servicemen during the War). In 1945, he played at the opening sessions of the United Nations in San Francisco, and in April of that year, he traveled with composer Benjamin Britten to the former concentration camp at Bergen-Belsen to play for Holocaust survivors. In 1947, he performed with the Berlin Philharmonic under Wilhelm Furtwängler, the first Jew to do so after the Holocaust (Furtwängler was later offered the post of principal conductor of the Chicago Symphony, but the offer was taken back when several musicians threatened to boycott because although Furtwängler did not join the Nazi's, his choice to remain in Berlin through the War was thought to bring prestige to Hitler's regime). Menuhin would make several recordings with Furtwängler, claiming that the conductor had aided a number of Jewish musicians to escape the Nazis.

A proponent of World Music long before the term became popular, Menuhin helped to introduce sitar player Ravi Shankar to Western audiences even before he was discovered by the Beatles. Yehudi's contract with EMI lasted for 70 years, one of the longest ever in the recording industry. His first recording was made in 1929 when he was just 13, and the last at the age of 83 in 1999. Yehudi was an early Western proponent of yoga, having studied with Indian yogis in the early 1950s. Yehudi Menuhin passed away on March 12, 1999. A Star on the Hollywood Walk of Fame at 6710 Hollywood Blvd is dedicated honoring Yehudi Menuhin's contributions to Recording.