Have a laugh, hear a song, and enjoy spending Wednesday With You, this comedy variety show from 1945.

Choose your CD format
or order disks individually: Add to Cart Add to wishlist
Play a sample episode from September 05, 1945:

Wednesday With You was a comedy variety show aired in 1945, and was dubbed by Billboard magazine, "The Eddie Show minus Eddie."  The broadcast was a summer filler. 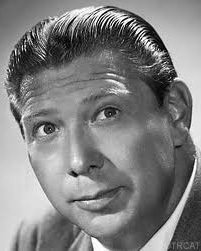 The summer of 1945 was a very busy time. The Nazi's had finally been defeated in Europe. The nation, tired from supporting the war effort and dealing with ration points, listened with great anticipation as Allied forces advanced toward the Japanese homeland and ultimate victory.

On the radio, Eddie did the only sensible thing. He went on vacation! The final weeks of the 1945 Radio Season had been a flurry of activity, with Eddie and his cast visiting military installations around the country, so it is little wonder that he needed a break. What better place to take it than  Cozy Cabana Mountain Lodge? The only problem is that the place is a wreck, so Eddie left the cast of his Wednesday night program to fix the place up and run it (Eddie must have gone to the beach).

Announcer Harry Von Zell was the supervisor of the renovation efforts and ran the lodge, along with setting up most of the jokes. Singer Nora Martin, tenor Fred Martel and trumpeter Leonard Sues and his Orchestra did their best to enjoy a summer in the mountains while accomplishing the tasks assigned by Von Zell and taking care of the non-existent guests.

All in all, Wednesday With You had all of the laughs and music. It just did not have Eddie! This was a little bit different approach to the Summer Replacement than other programs used. The usual practice was putting a whole new program in place while the Star was out of town. The Wednesday With You format gave the audience what they were used to and allowed Bristol Myers to keep their products in the listener's minds.

This stand-in show held the timeslot -- and the attention of audiences -- until the regular show esumed broadcasting in the fall.