Imagine walking along a shimmering sandy beach. You look out to sea and perhaps glimpse a fishing trawler working its nets. Further out to sea you see cargo ships destined to far off, seemingly unknowable lands. As peaceful as this scene is, you know that recent storms made the sea a dangerous place and have even reshaped the beach you are walking on. 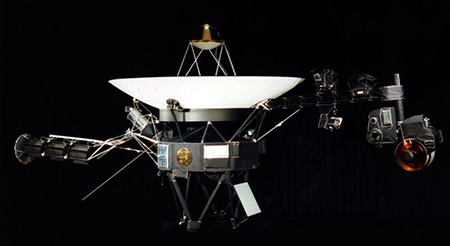 Suddenly, just at the edge of the surf, you spy a green glass bottle with a cork jammed tightly into its neck. The glass of the bottle is intact but mostly covered with barnacles and other marine growth although you can see a note written on a tightly rolled slip of paper inside the bottle.

The "Note in a Bottle" is an old cliché, and it makes several assumptions that prove it is a desperate if inefficient means of communication. The sender hopes that his message will survive in its fragile container long enough to be read, far from a guaranteed result given the size and dangers of the sea. The most desperate assumption is that the message if it survives, will be found by someone who can read the message and cares enough to do something about it.

The Voyager Program was an outgrowth of the Mariner Probe Series which began launching in 1962. The Mariner Probes were designed to robotically explore the planets Venus, Mars, and Mercury. Although these probes were intended to explore the relatively close Inner Planets, the orbital mechanics and launch windows were exercises in mathematical wonder. However, they would pale in comparison to Voyager.

Originally scheduled to be Mariner 11 and 12, Voyager was enough of an advancement over the Inner Planetary probes to deserve a designation of their own. The Voyager Probes took advantage of a trajectory called the Planetary Grand Tour. Thanks to a planetary alignment that only occurs every 175 years, the probes could take advantage of a gravitational "assist" from the planets they flew by.

Launched in 1977, Voyager 1 and 2 would eventually fly past Jupiter, Saturn, Uranus, and Neptune. Once they completed their missions, the probes would continue into Interstellar Space, and with nothing to get in their way, who knows what or who will eventually find them?

The program afforded mankind to set adrift the ultimate "message in a bottle". From the time the idea was hatched, it was obvious that a handwritten note, no matter how well preserved, would be useless to its eventual recipients. A phonograph record was selected as a means of transferring data through the rigors of space. A diagram on the hull of each probe pictorially illustrates how the records are to be played.

The contents of what would be known as "The Voyager Golden Records" were selected by Cornell University astronomer Carl Sagan. They would include Greetings (read in English) from President Carter and United Nations Secretary-General Kurt Waldheim, as well as words of greeting in 55 ancient and modern Earth languages. Also included were sounds of the natural world like weather, waves crashing, and songs of birds and whales.

Voyager 1 became the first manmade object to travel beyond the Solar System in 2012, and radio signals from the probe, which travel at the speed of light, are not received by Earth-bound listeners for fifteen hours after they are transmitted. The nuclear-powered batteries that power the Voyagers are expected to run out around 2030.

It is unlikely that anyone will find our "messages in a bottle" for thousands of years, if at all, but just knowing that the messages are drifting out there, somewhere, is a hopeful thought.