On the path to victory, all hand were on deck to defeat the Axis even Soap Operas of old time radio sponsored by the United States Government.

Choose your CD format
or order disks individually: Add to Cart Add to wishlist
Play a sample episode from December 24, 1942:

Isolationism was a popular sentiment in the years and months before December 7, 1941. After the Date Which Would Live in Infamy, people from all over the nation, from all walks of life suddenly rose as one and dedicated their efforts to defeating the Axis.

Industrial workers produced more planes and guns and bullets. Farmers raised more food than ever before. On the radio,  they produced more... Soap Operas? 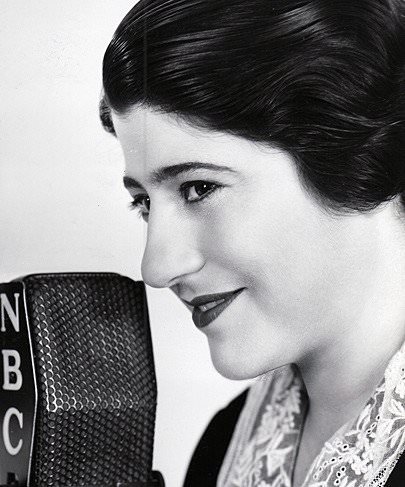 Yes, Soap Operas were part of the War Effort. No one tried to throw an organ at Mussolini, give Tojo amnesia, or find out that Hitler was having a secret affair with his best friend's sister who had been abandoned as an infant. Rather, the Soaps were employed as part of the Allied propaganda effort. Most of the sudsy dramas had a character, or the beloved of one of the characters who found themselves in uniform, only to return to their homes broken in someway in body or spirit, or with that Soap Opera favorite, a bad case of amnesia.

In 1942, CBS gave a portion of their day-time air to a sustained program called The Victory Front. The Victory Front was billed as being "sponsored by the United States Government", although which branch or department of the Government is not listed. The show featured the stars of favorite soap operas, "the people many of us know and love, the people we meet every day on the radio", showcasing issues important to the Wartime Housewife.

The Goldbergs present Molly's optimism for the world after the War on the eve of her daughter's wedding. What a wedding it will be, with the groom leaving right after the ceremony to board a troop train and the bride going to work in a War plant, but somehow we know that they will be blessed with children.

On Second Husband, our heroine is alone in New York on Christmas Eve while her husband is on a submarine, prowling the depths of the Atlantic.

The gang from Live Can Be Beautiful learn some lessons about their enemy when a refugee comes into the bookstore to buy a bible. Another episode is presented as a dream sequence where the Gestapo takeover the bookstore.

The scripts for The Victory Front were written especially for the program. A few of the episodes presented new characters and stories for "serial drama". Give Us This Day was a series centered on a city-boy who visits a farm for the summer and learns about life and food production, and on We Love And Learn a school teacher learns as much from her pupils as they do from her.