One of the most popular on-air country-western charters was a philosophical corn-pone named Uncle Ezra created by Patrick Barrett.

Choose your CD format
or order disks individually: Add to Cart Add to wishlist
Play a sample episode from February 14, 1944:

"Salute to the Farmer"

The WLS National Barn Dance did not invent hillbilly music, but the show did bring the idea of "down-home fun" to a nationwide audience. Although the program showcased what would later be referred to as "Country Music", Barn Dance's target audience was city-folk. Which only made sense, by the mid-1920's, more and more people were leaving the farm-life to find their fortune in the cities because that is where the money was. 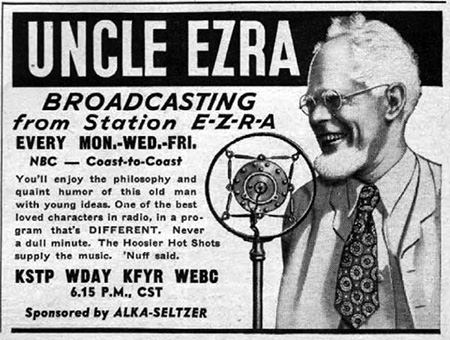 Barn Dance fans certainly enjoyed the lively, very recognizable music, but they also enjoyed hearing the corn-pone characters who filled the air in between the songs. One of the most popular was a philosophical old gent named Uncle Ezra. The character was created by Patrick Barrett, and worked with his real-life bride, Miss Cecile.

Uncle Ezra, "the Jumpin' Jenny Wren", supposedly broadcast from a "powerful five watter" in Rosedale, Illinois. Part of Uncle Ezra's bit was to rush in and breathlessly ask "Hain't missed nuthin' – have I?" Very few of the players who appeared on Barn Dance over the years made a lot of money from the show, they were usually paid five to ten dollars a night. However, the show was an important stepping stone to bigger and better things.

In 1944, NBC's transcription service began offering Uncle Ezra spots for independent stations. The friendly advice and wisdom on the short pieces (about five minutes, including the sponsor's message) could be tied into a variety of local sponsors. The show came from the fictional station (call letters E-Z-R-A) and filled with "local news", not unlike Garrison Keillor's material on The Prairie Home Companion, decades later.