Teresa Brewer was born to sing. This came as a bit of a surprise to her family, none of whom had any particular musical inclination. Her mother, however, recognized and encouraged her daughter but securing an audition with her hometown radio station, Toledo's WSPD. Little Teresa won a spot on "Uncle August's Kiddie Show" singing "Take Me Out to the Ballpark". The pay was in cupcakes and cookies from the show's sponsor, be Teresa's career never looked back.

If there is anything remarkable about Teresa Brewer's career, besides how easy she made it look, it is the way she never let her career get in the way of her happiness. From the age of five to twelve, she toured with one of the production units of the Major Bowes Amateur Hour, accompanied by her Aunt Mary. Teresa was very close to her aunt, and Aunt Mary lived with Teresa's family through both of her marriages until she passed away in 1997.

When Teresa turned twelve, her parents decided she should get off the road and attend school normally. Teresa managed to continue performing, and eventually left school two months before her high school graduation ("What would I learn in those two months? All I'd have is a slip of paper. They said they wanted to give me an honorary diploma. I said 'Keep it, who cares?'")

In 1949, Teresa landed a contract with London Records, a British company anxious to sign American artists. Three singles with London went mostly unnoticed, but the next was "Copenhagen" which she cut with the Dixieland All Stars. The B Side of "Copenhagen" was supposed to be a throwaway song called "Music Music Music". To everyone's surprise, "Music" went gold and became Teresa's signature song. 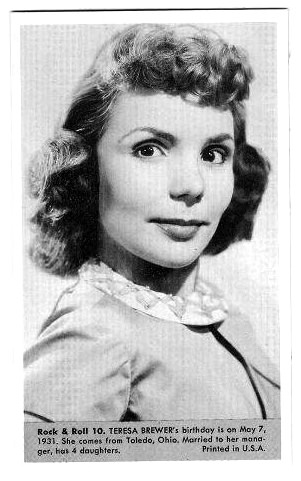 Barely 20 in 1951, Teresa began appearing on Bing Crosby's Chesterfield program. Bing called Teresa the "Sophie Tucker of the Girl Scouts", referring to her big voice compared to her petite size. In 1953 she won a role in Paramount's 3D Technicolor project Those Redheads from Seattle with Agnes Moorehead. The camera loved Teresa (both cameras, in the 3D film) and Paramount offered her a seven year contract. With two daughters and a third on the way, Teresa passed up on the pressures of becoming a starlet.

Teresa released hit after hit through the fifties, and kept her live performances to a minimum so that she could dedicate more time to her family. Whenever possible, she avoided one night stands, preferring longer engagements that allowed her girls to settle in with her. She also found that performing on television worked to give her time with her family. Teresa built a reputation as a full time mom who moonlighted as a singer, rather than the other way around, which was usually the case in the music industry.

Through the late fifties and early sixties, most of Teresa's hits were covers of R&B tunes. She later expressed regret that the black artists were unable to get a hit until their songs were released by a white artists. Some of her later projects included recording with Count Basie, Earl "Fatha" Hines, Slam Stewart and Ruby Braf. At one point, Duke Ellington asked her point blank when the two of them would do an album together, the result was It Don't Mean a Thing If It Ain't Got That Swing, the Duke's last recordings.

After Teresa's second husband, producer Bob Thiele passed away in 1996, she lost interest in recording and performing. Teresa Brewer died in 2007 at her New Rochelle, NY, home with her daughters by her side. After she passed, the comment was made that "the angels in heaven are singing more strongly now."

A star on the Hollywood Walk of Fame at 1708 Vine St honors Teresa Brewer's contributions to the Recording Industry.