Tales from the Diamond K

Choose your CD format
or order disks individually: Add to Cart Add to wishlist
Play a sample episode from August 15, 1951:

It is believed that there were more than a thousand of these self contained radio tales directed towards young people, however less than 40 are known to have survived. 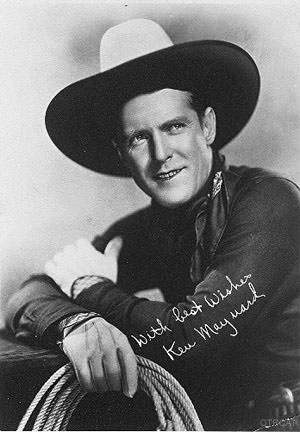 Each is delivered in an intriguing and exciting style, tales of cowboys and cattle trails, rodeos and parades,hidden gold and buried treasure. Also listen for Maynard's premiums, an offer for a personalized phonograph recording of his stories, and the Western "K-Shirt" with the Diamond K Brand on the front.

Ken Maynard performed as a trick rider in Buffalo Bill's Wild West Show and served in the Army during WW1. He got his start in silent movies in 1921, at first as a stuntman. With his rugged good looks and excellent horsemanship he soon became a Cowboy star. Recording for Columbia Records, he was one of the first Singing Cowboys. With his two six-shooters, white cowboy hat, fancy shirt, and white stallion Tarzan, Maynard appeared in over 90 films between the 1920s and mid 1940s. Sadly his life and career were cut down by alcoholism. For a long period of time he lived in a rundown mobile home, supported by an unknown benefactor, believed by many to be Gene Autry. In 1973, Ken Maynard died penniless at the Motion Picture Home, Woodland Hills, CA. His star on the Hollywood Walk of Fame is at 6751 Hollywood Blvd.