Featured "genteel Dixieana" with an evangelical effort, Bible verses were often recited between the musical numbers. Just the thing to listen to on the front porch with the smells of Sunday dinner wafting through the windows...

Choose your CD format
or order disks individually: Add to Cart Add to wishlist
Play a sample episode from November 06, 1949:

The warm summer sun is beating down. The kids have taken off their church shoes and are running barefoot on the lawn, but you know that the best place to be is in the quiet shade of the porch. There you can enjoy a cool breeze, smell a wonderful Sunday dinner cooking, and listen to the sweet sounds of Sunday Down South coming to you from WSM in Nashville. 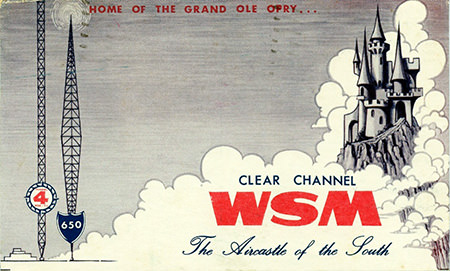 Nashville, Tennessee, has been known as "Music City, USA" ever since Queen Victoria remarked after a group of performers from the city entertained her in 1874 that "These young people must surely come from a musical city". With over 700 churches and home to several Christian music companies, it is also known as "The Buckle on the Bible Belt". Probably the most widely recognized Nashville institution is "The Grand Ol' Opry", which has been broadcast from WSM since 1925.

The Opry represented a subtle division in Nashville society. For the first few decades of its broadcast, most of the "movers and shakers" of Nashville's social elite looked down their noses at people who enjoyed "hillbilly music", but as time went by people became more willing to admit that they enjoyed Country Music. The sound became so important that WSM almost lost their NBC affiliation over it. A portion of The Grand Ol' Opry had an important spot on the NBC Saturday night line-up, but the show was actually a several hour long affair. WSM locally preempted the rest of the NBC Saturday line-up so The Opry could be broadcast in its entirety. NBC was not happy, but WSM was important to the network.

Since NBC had a prohibition against recorded broadcasts until the middle of WWII, the network often turned to trusted regional affiliates for live content. One Friday afternoon in 1940, the call from Phil Carlin in New York came to the WSM studio, "Can you feed me a show Sunday afternoon?" WSM staffer Joe Stapp pulled together a few acts to create Sunday Down South. Rather than the rollicking hillbilly sounds popular on The Opry, Sunday Down South featured more traditional music with both secular and religious origins. Although it was a music program more than an evangelical effort, Bible verses were often recited between the numbers.

NBC bounced Sunday Down South between the noon, 3:30 and 4:30 pm time slots until 1942 when the Lion Oil Refinery of El Dorado, Arkansas, took sponsorship and settled at 5:00 pm Sunday afternoon. The program encapsulated a sound of "genteel Dixieana" through the 1940s and 50s, bringing listeners "a breath of magnolia and a ray of sunshine".