Known from husband and wife duo Steve and Eydie performed a syndicated program for US Army Recruiting.

Steve Lawrence is best remembered as a popular TV actor and the pants-wearing half of the singing duo Steve and Eydie with his wife, Eydie Gormé, but there was a time in the late 1950s that he was just another draftee in the U.S. Army trying to keep from being yelled at by his Sergeant. 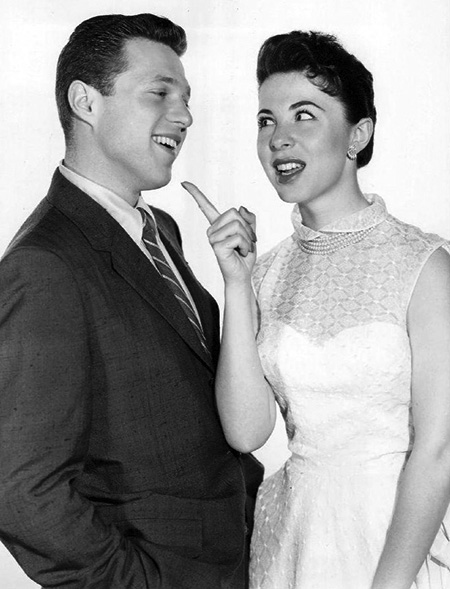 Born Sidney Liebowitz in 1935, he was the son of a cantor in the Bronx and attended Thomas Jefferson High School. He began recording on King Records at the age of 16 and chose the first names of two of his nephews as a professional name. He had a number of hits on the pop music charts, including "Go Away Little Girl", "Pretty Blue Eyes", "Party Doll", and "Portrait of My Love". When his number came up in the draft, he was actually able to avoid getting too wrung out by his Sergeant thanks to his musical background and he was assigned to the U.S. Army Band "Pershing's Own" in Washington DC.

After Steve Allen left The Tonight Show to concentrate on his Sunday night variety show, he brought a girl singer with him named Eydie Gormé. Eydie was born Edith Gormezano to Jewish parents from Sicily and Turkey. She went to William Howard Taft High School and was a classmate of Stanley Kubrick. When The Steve Allen Show got underway on Sunday nights, Eydie was assigned to sing duets with newly hired Steve Lawrence, and the chemistry between them went far beyond the music. The couple was married at the El Rancho Hotel in Las Vegas, Nevada, on December 29, 1957.

By the time The Steve Lawrence Show was being syndicated for Army recruiting in 1960, Steve's obligation as a draftee was probably complete, however, even as an Honorably Discharged Veteran, the program still introduced him as PFC Steve Lawrence. The 15-minute spots featured a song and some patter from PFC Lawrence, a chat with his guest, a song from the guest, and a sketch about an Army Recruit getting a really attractive deal from his recruiter.

Steve and Eydie went on to have very successful music careers together and as solo acts. Their good friend Frank Sinatra often quipped that Steve Lawrence was the best male vocalist he had ever heard; however, Sinatra often made the same statement about Tony Bennett. A highlight of their career was their Diamond Jubilee Tour with Sinatra.

Eydie retired from touring after their One More for the Road Tour in 2002 and took up blogging in 2006. Steve embarked on a solo tour in November 2009. Eydie Gormé passed away on August 10, 2013, in Las Vegas, less than a week before her 85th birthday. In June 2019, 84-year-old Steve Lawrence announced through his publicist that he has been diagnosed as being in the early stages of Alzheimer's Disease. He reports that he is under the care of the best doctors in the field who have, so far, been able to slow the "horrific progress" of the disease.

Eydie Gormé and Steve Lawrence share a Star on the Hollywood Walk of Fame at 1595 Vine St for their contributions to the Recording Arts.